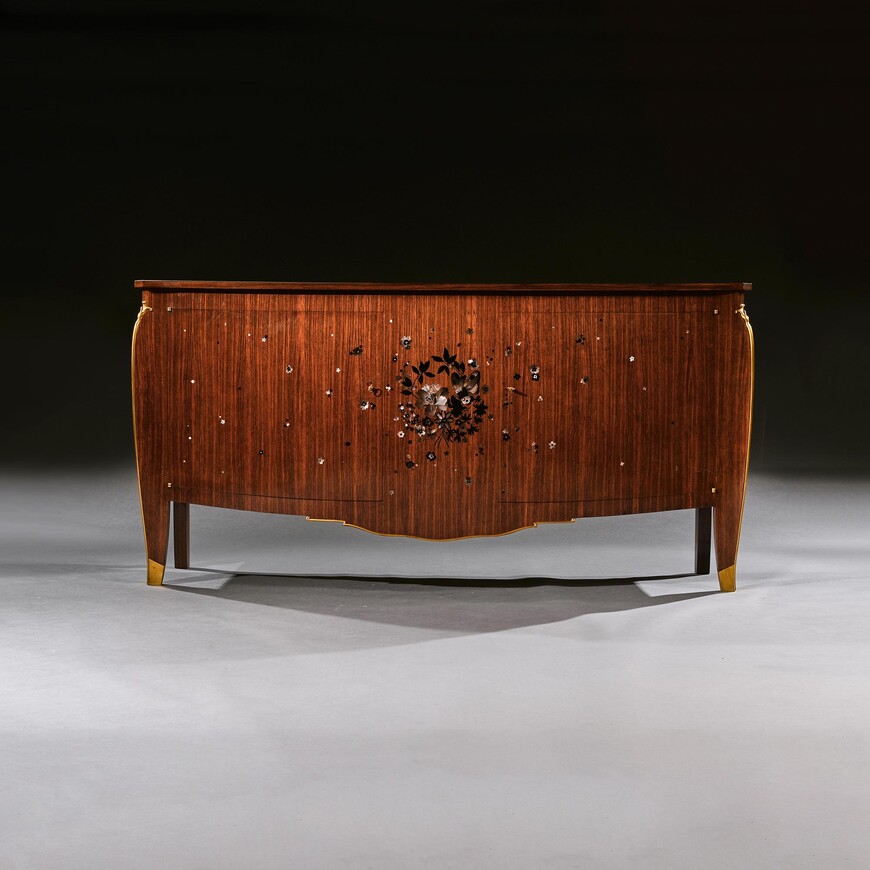 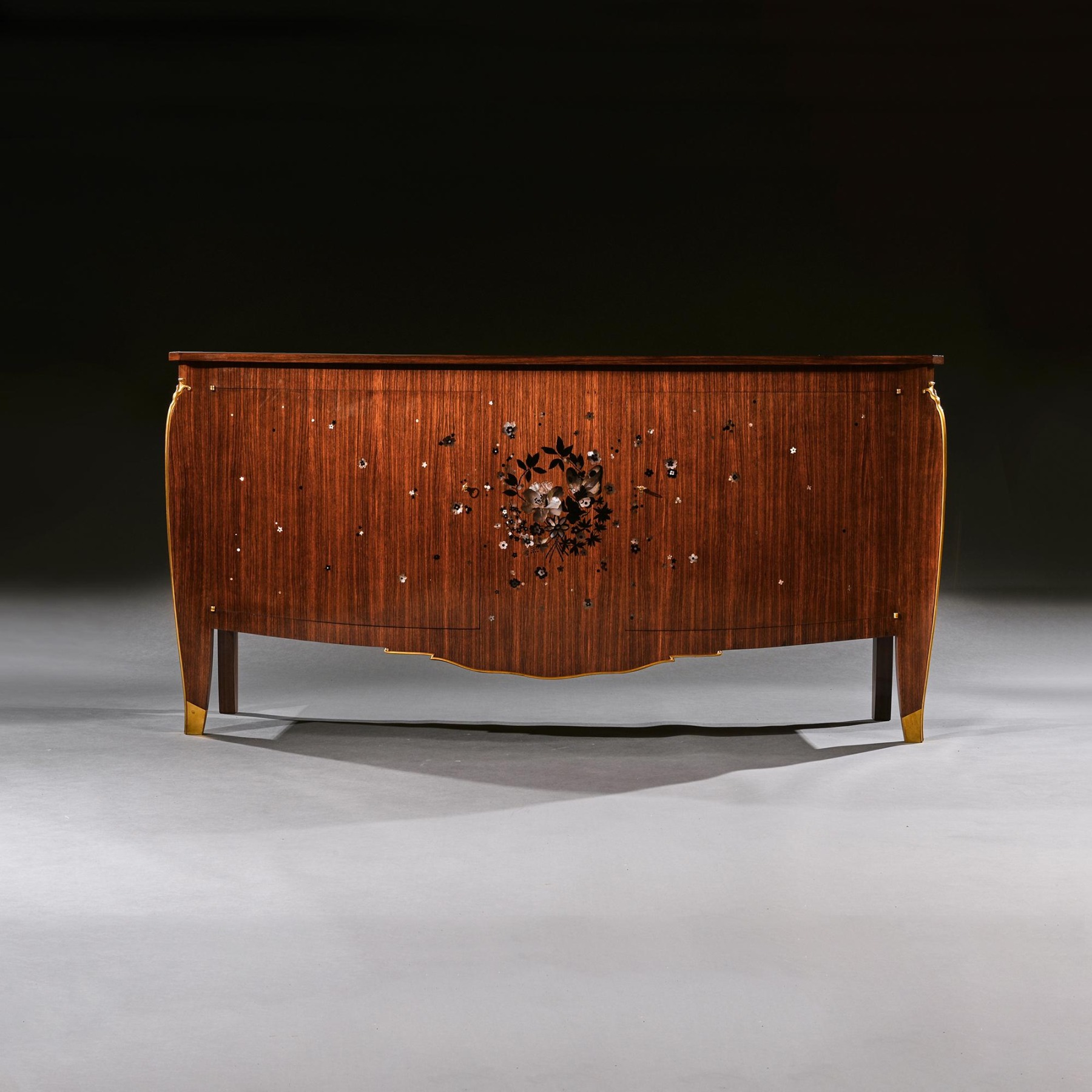 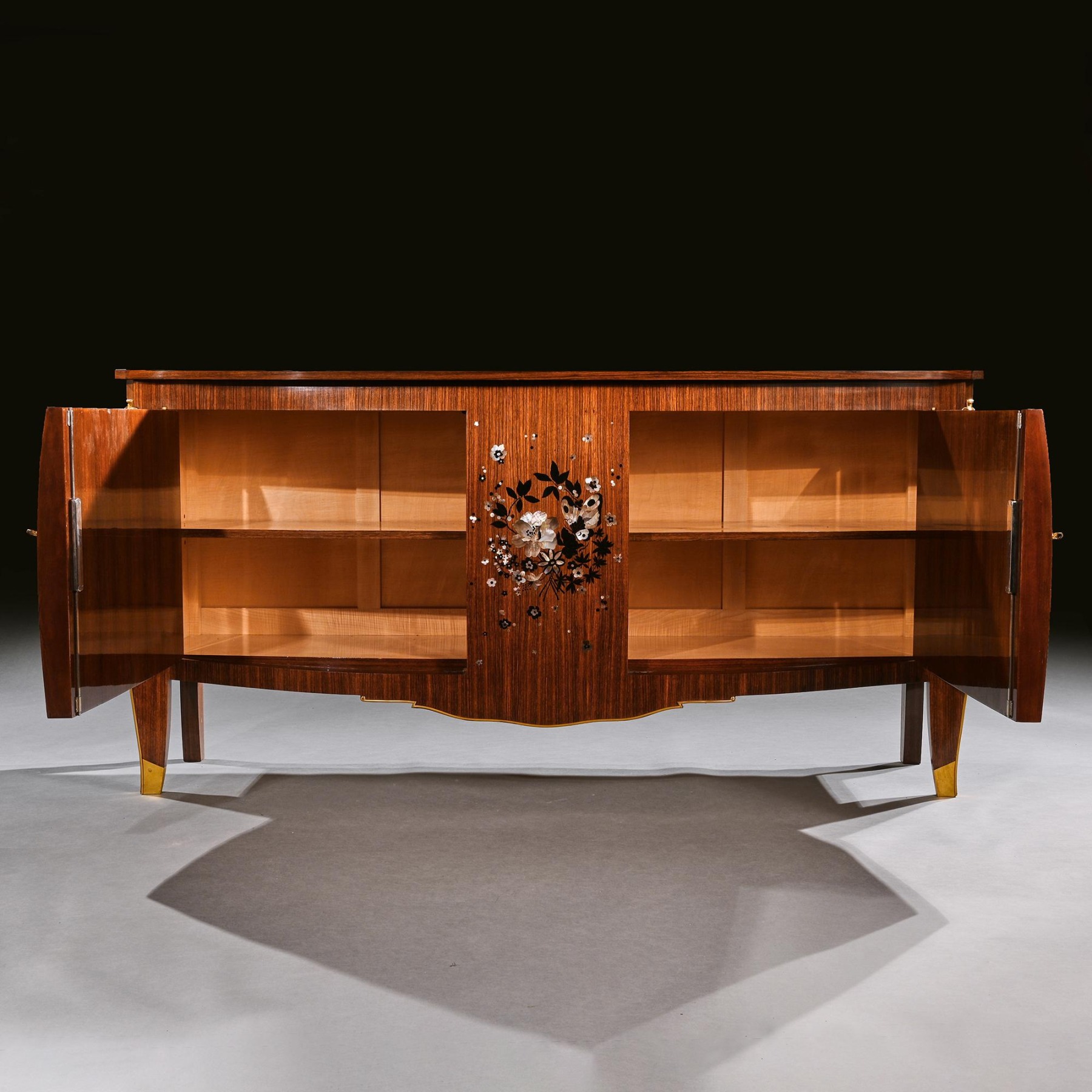 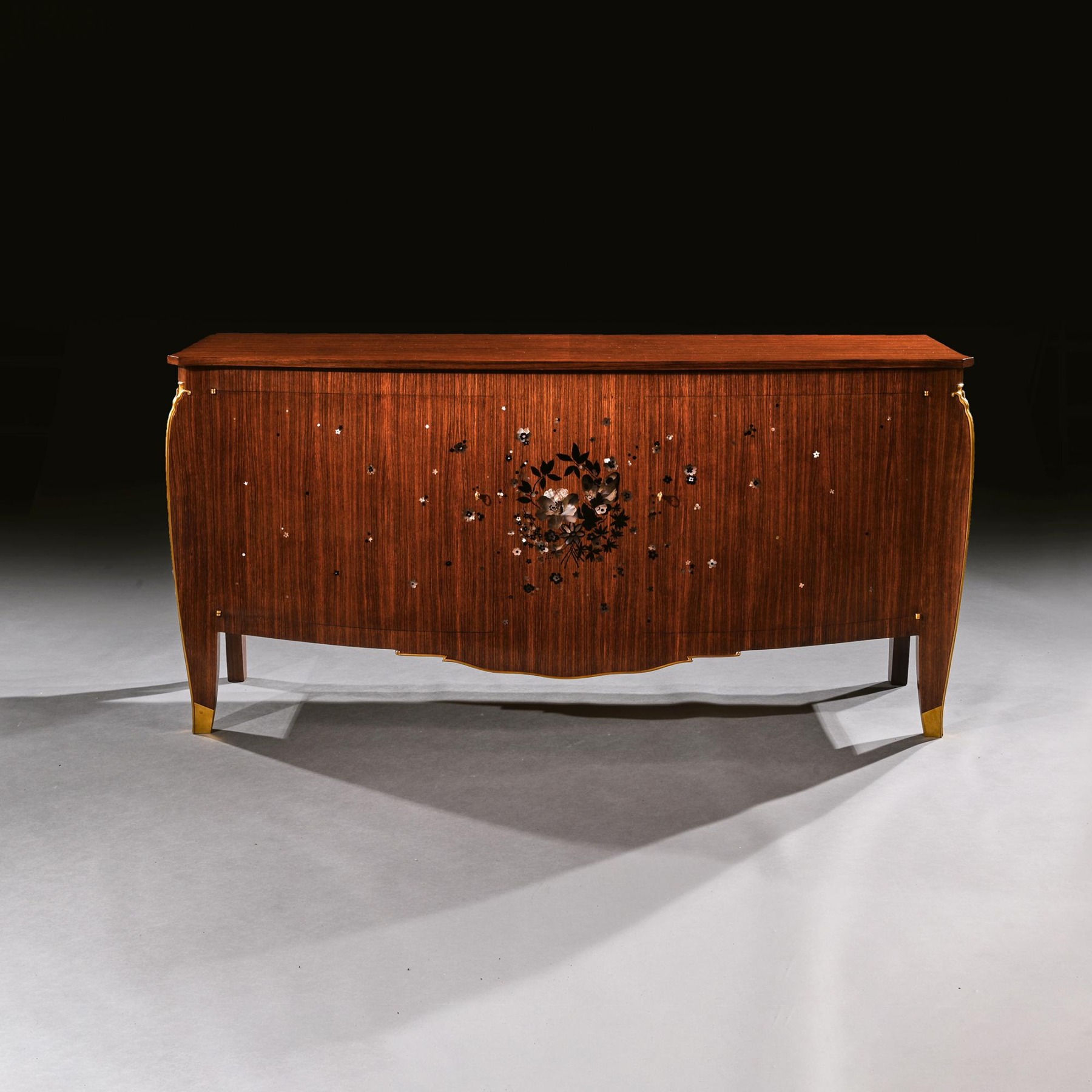 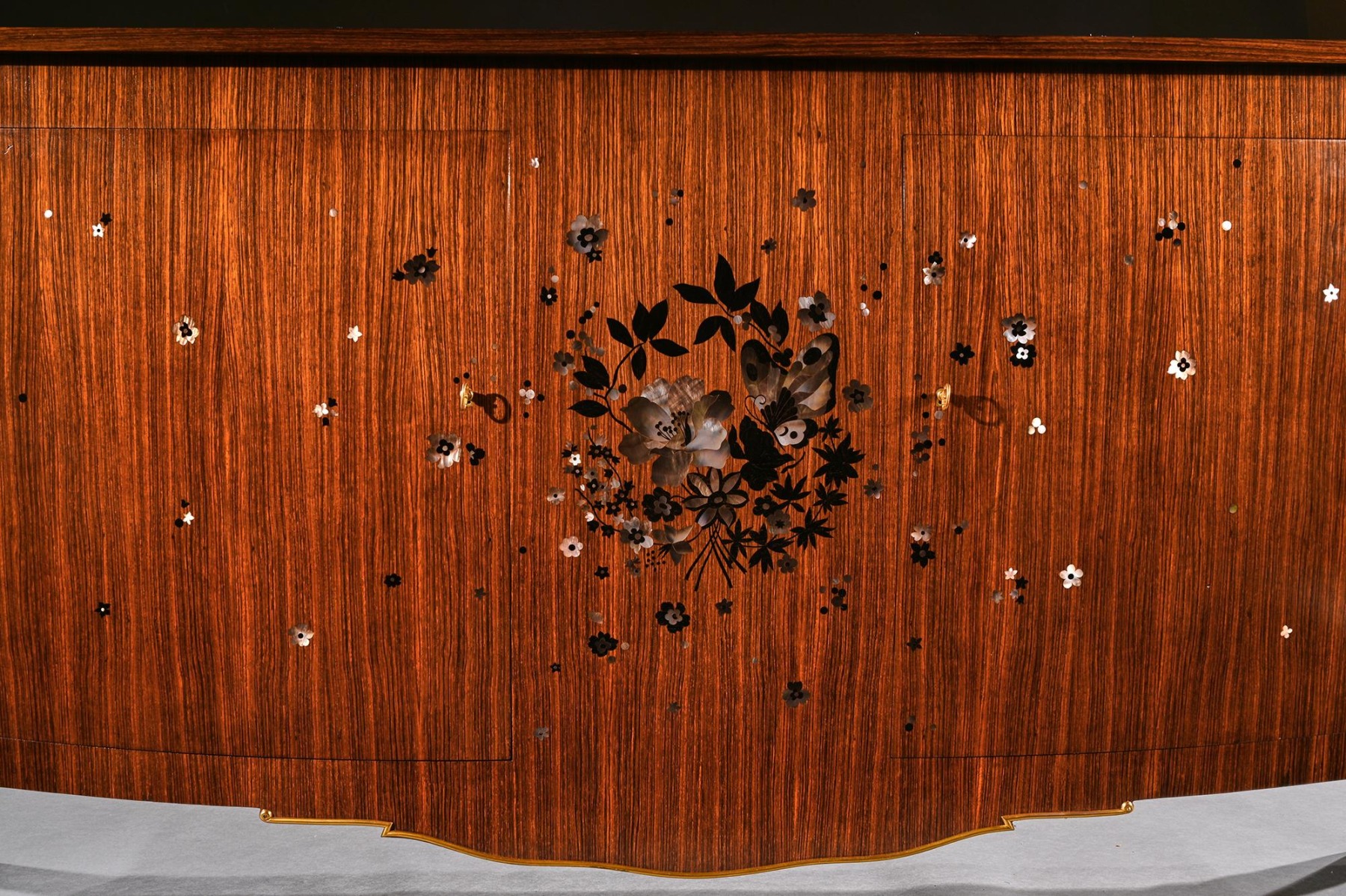 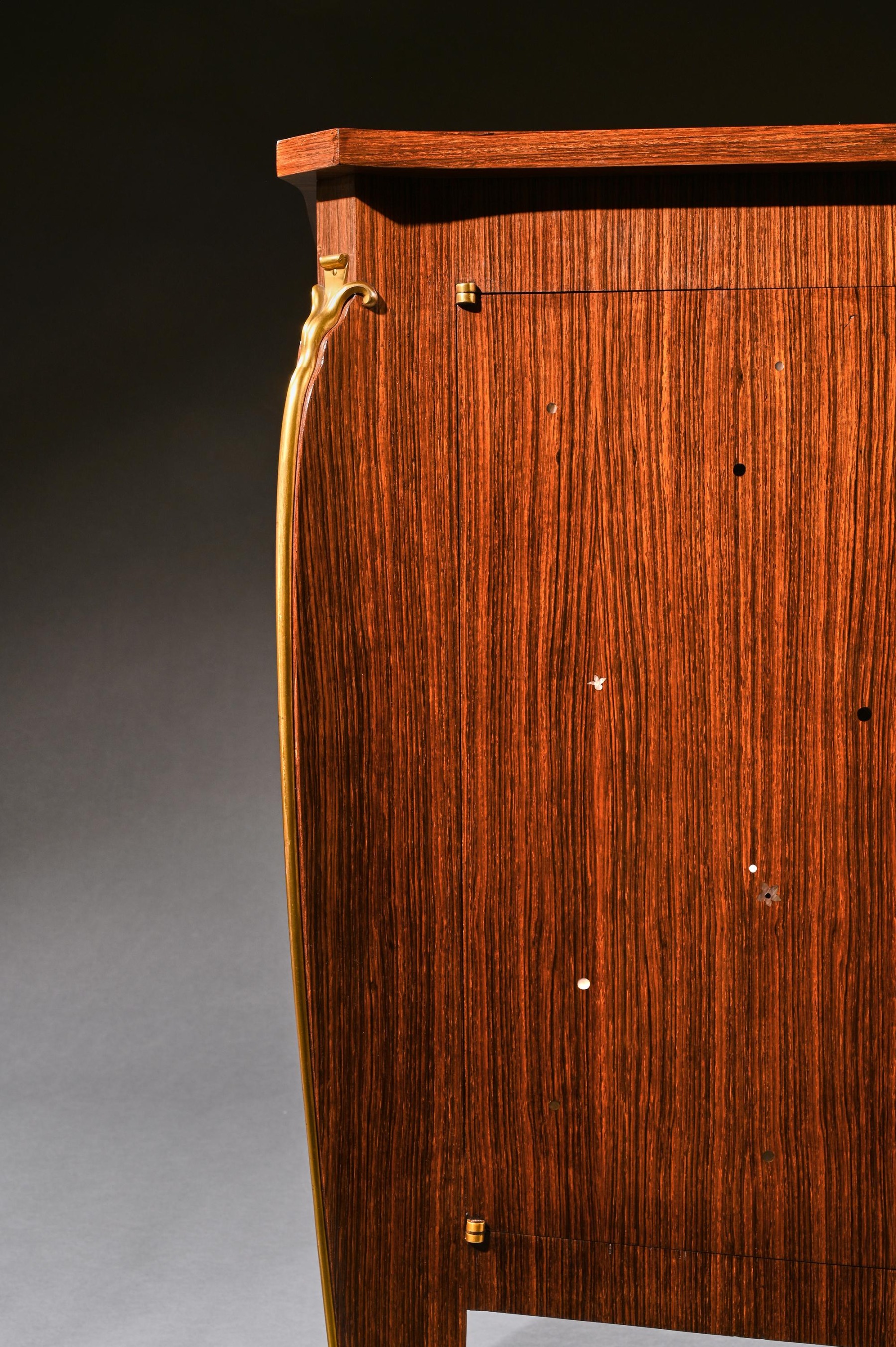 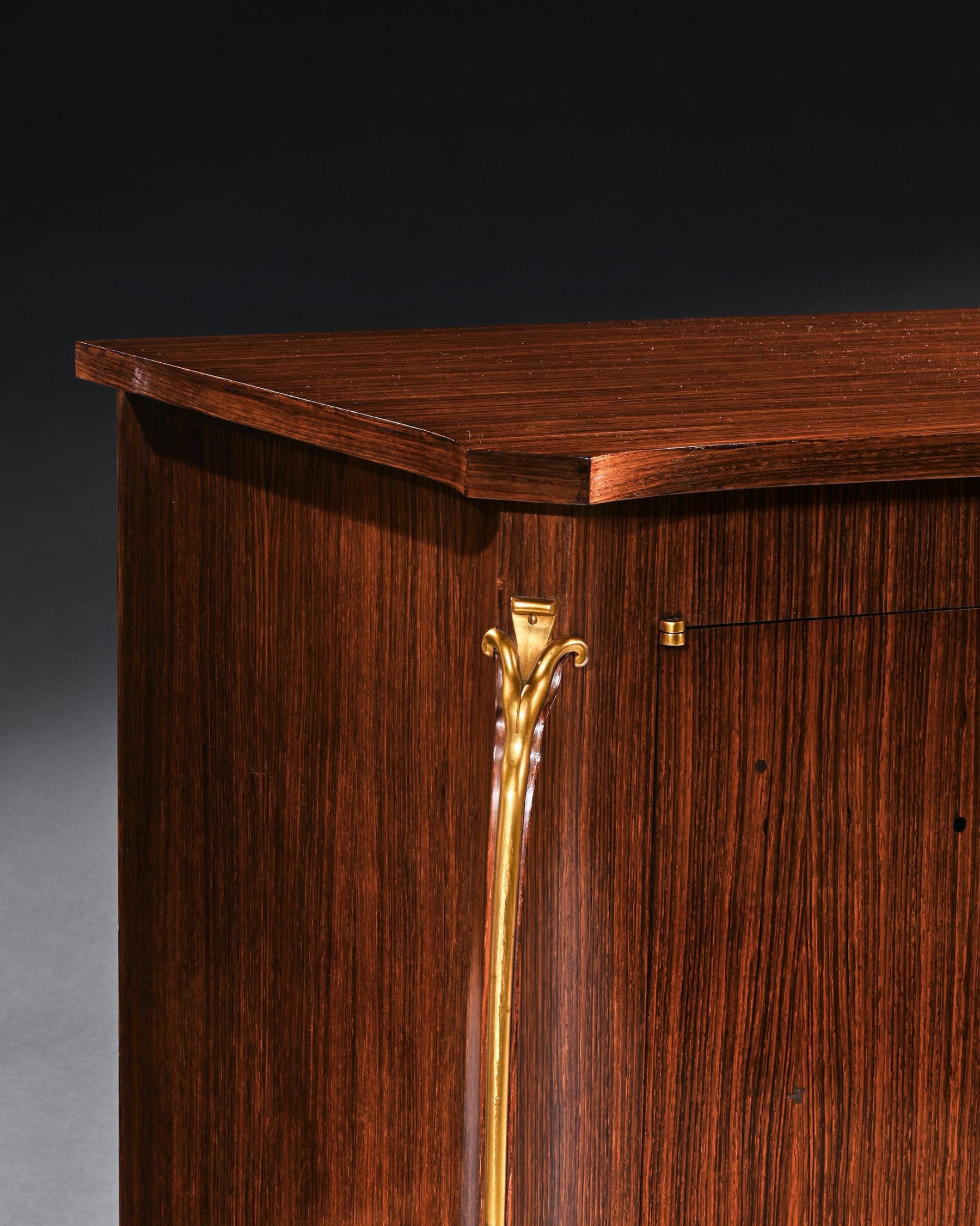 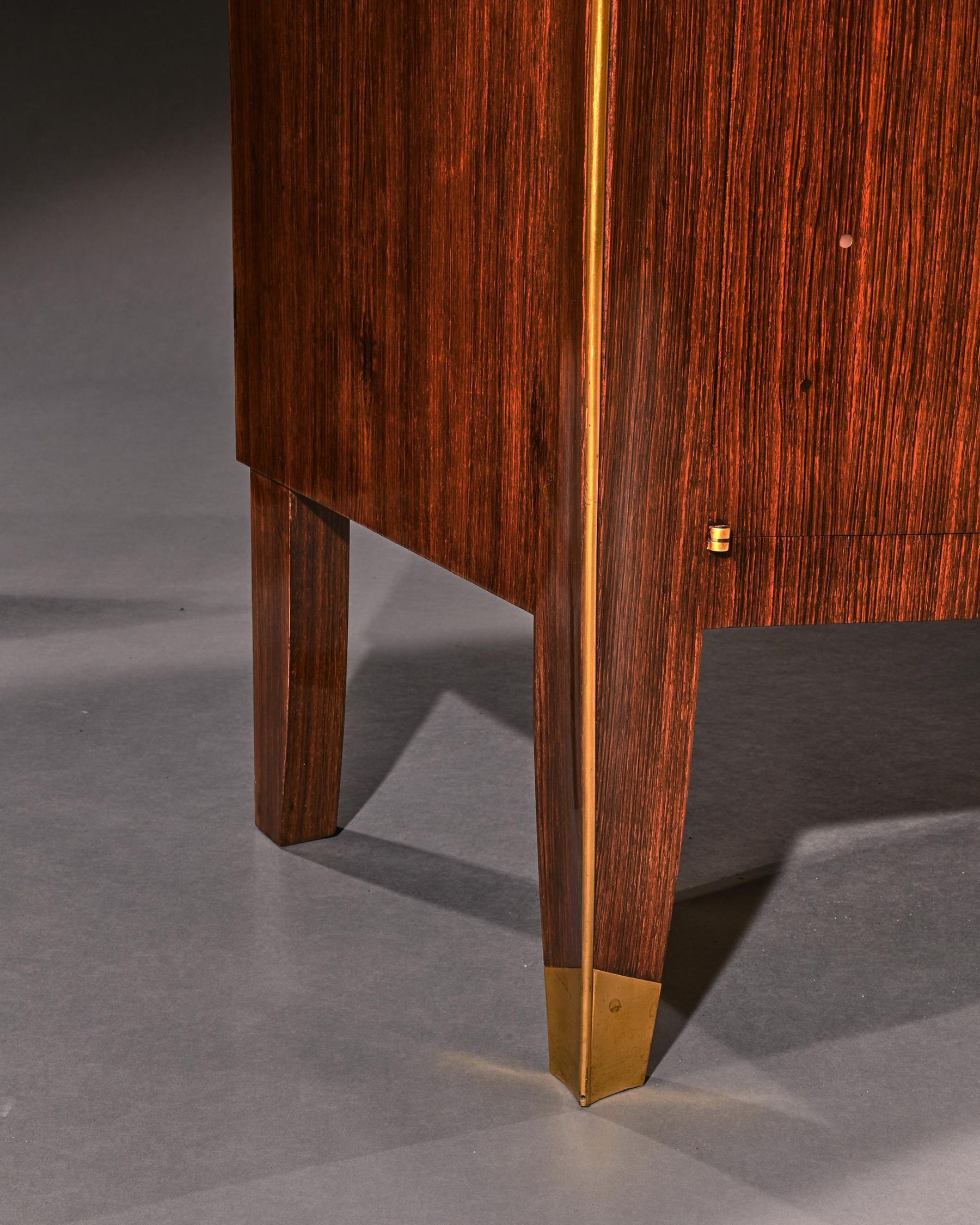 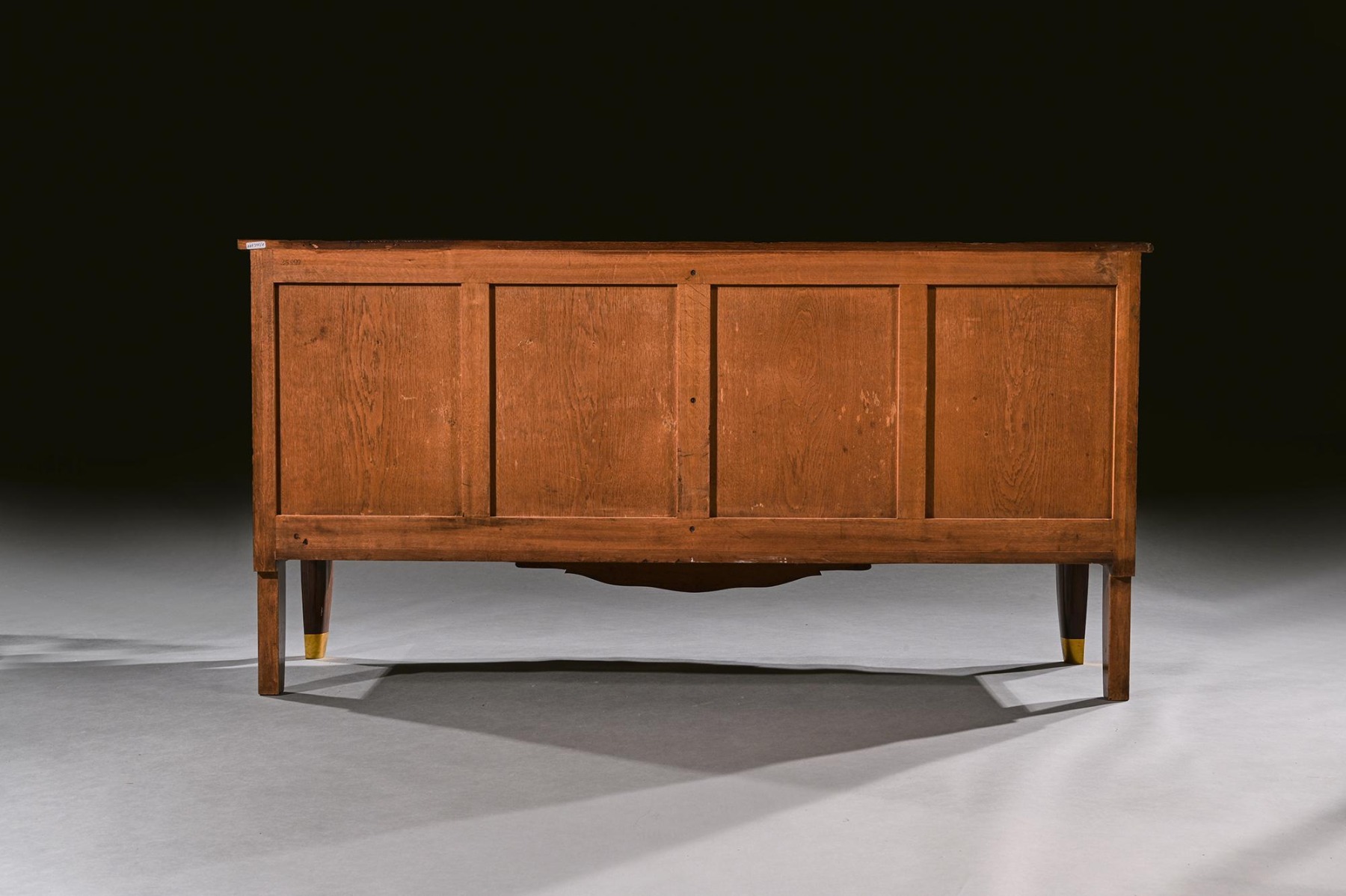 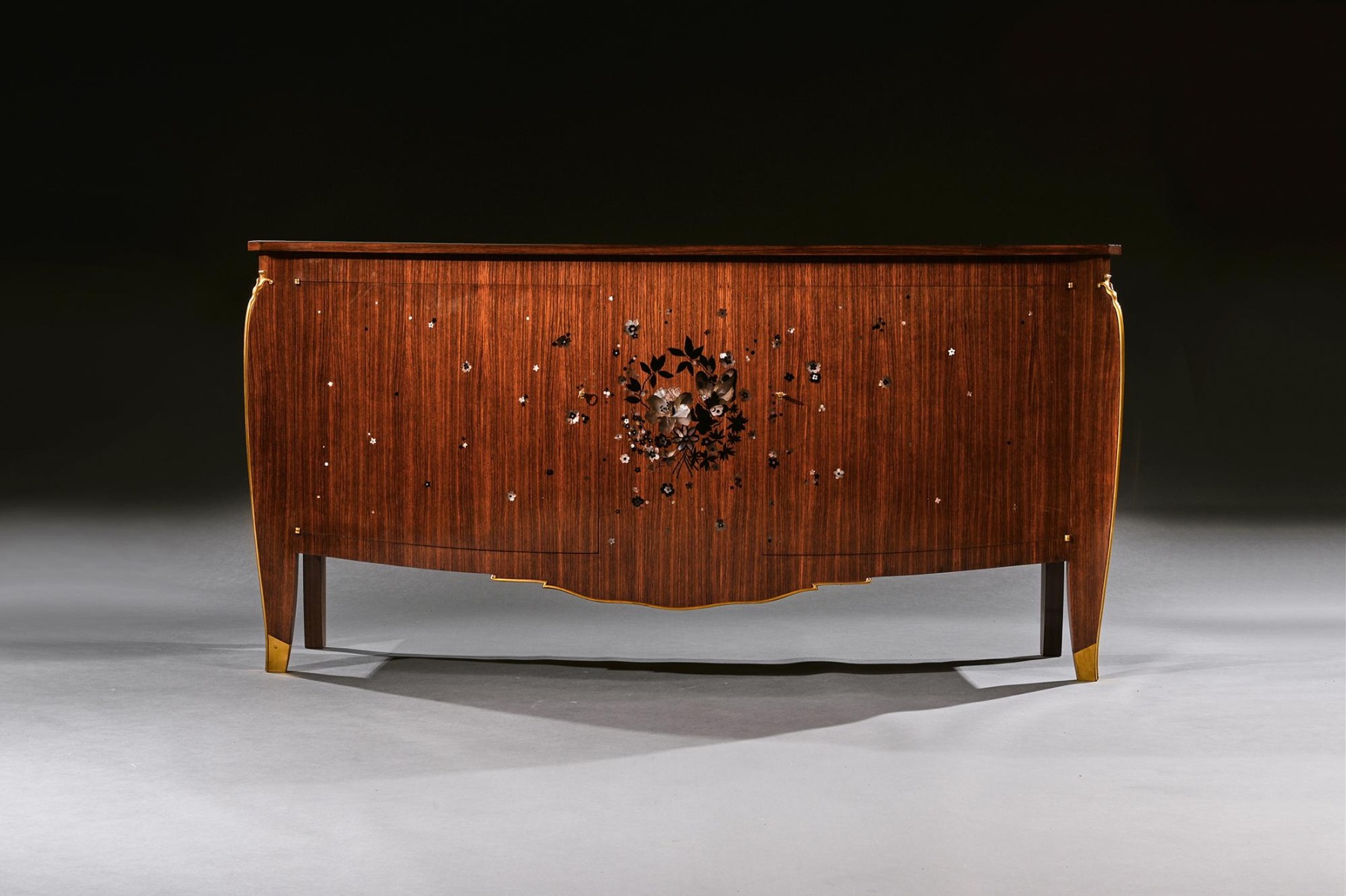 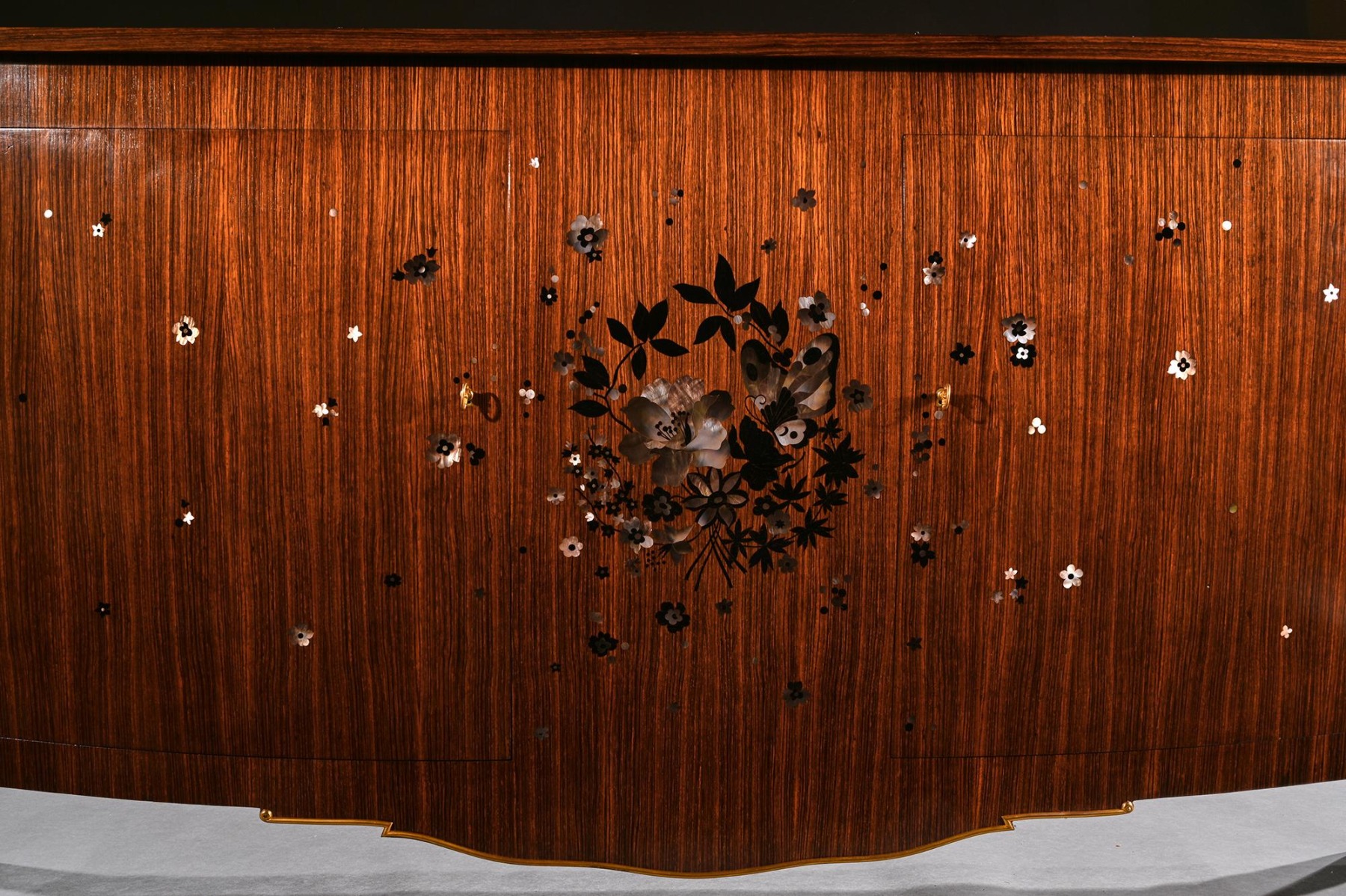 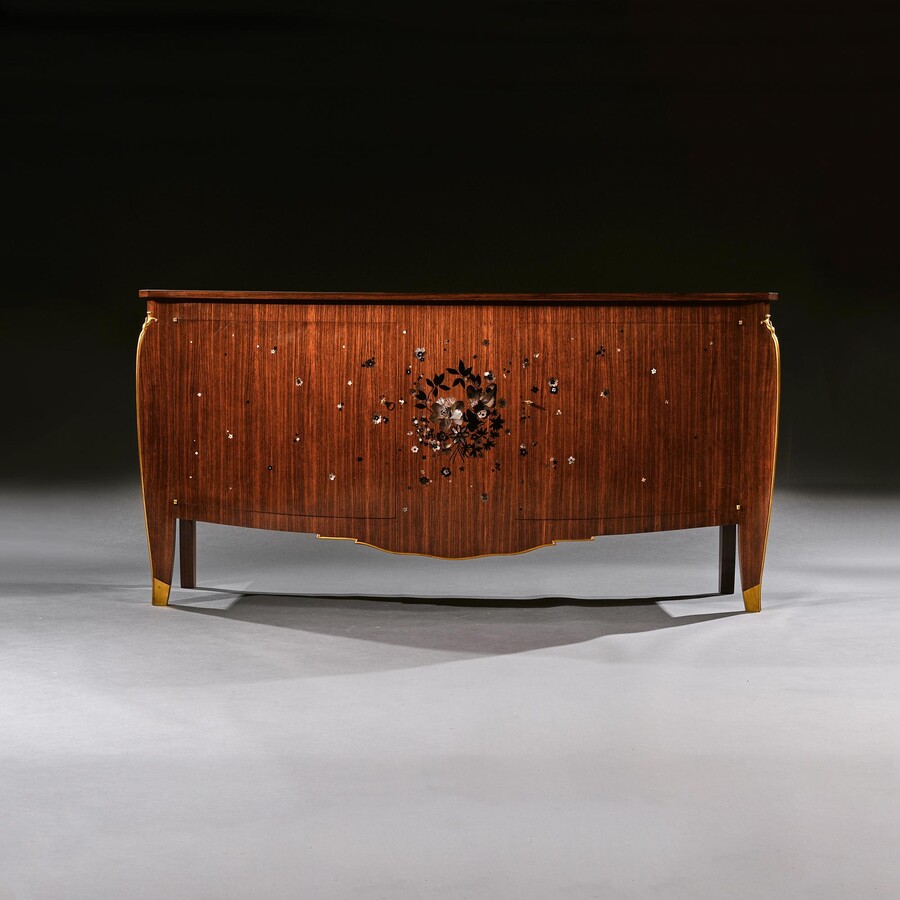 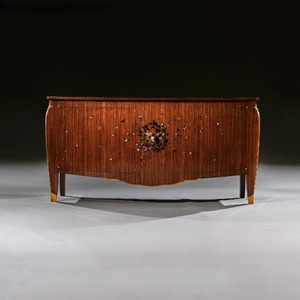 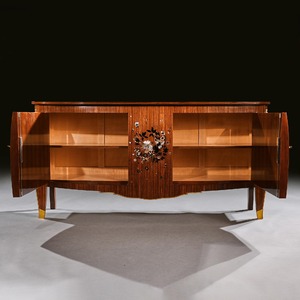 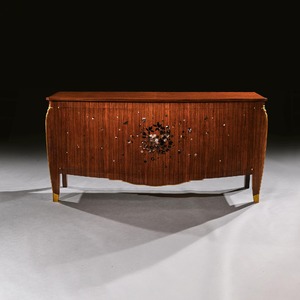 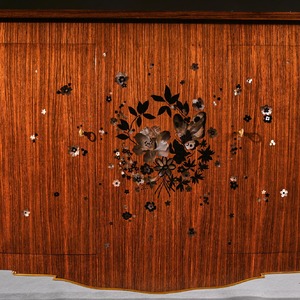 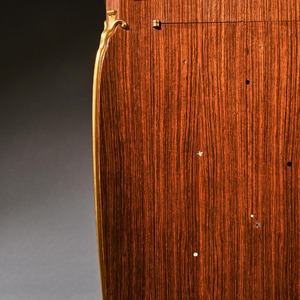 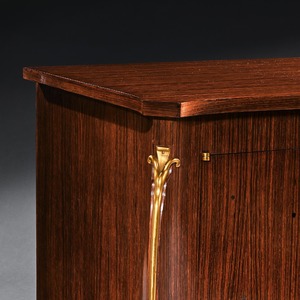 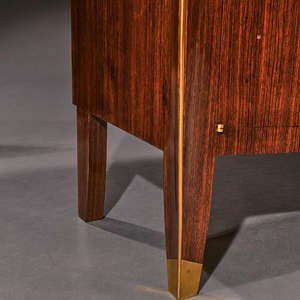 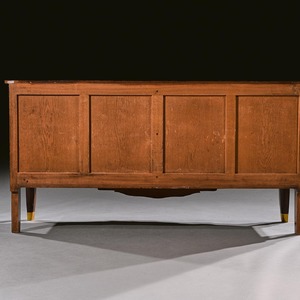 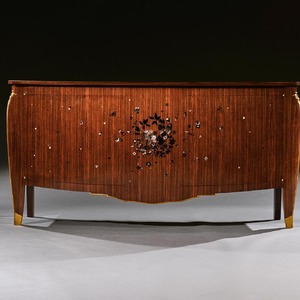 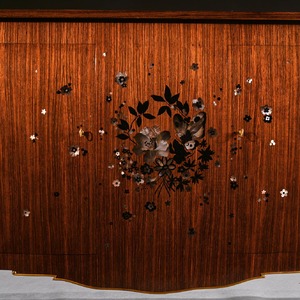 A masterpiece of design and craftsmanship by the renowned Art Deco designer and influencer Jules Leleu. The shaped top over twin bowed and convex doors centre by a marquetry butterfly and floral spray of ebony veneers and mother of pearl inlay by Messager). Each door opening to reveal a sycamore lined interior and an adjustable shelve with its edge veneered in palisander, above a gilt bronze outlined apron, raised on shaped end supports clad with gilt bronze mounts and sabots.

In excellent condition and of wonderful colour retaining both of the original steel and bronze keys, an extremely rare piece by one of the key designers in beginning the Art Deco movement Jules Leleu, very reminiscence of his famous ‘Feu d’artifice’ commode - fireworks commode.

His family firm of Maison Leleu had existed since the eighteenth-century and he helped to guide it through much of the twentieth century.

Leleu is celebrated for his conception of refined furniture forms and precision craftsmanship. His furniture is generally spare and sleek. He made significant use of opulent materials that were a keynote of haute Art Deco design and favoured the use of woods with warm tones, such as amboyna, Macassar ebony and palisander all of which imparted richness and elegance. He had his own distinctive and sophisticated style, often sober and reflective of traditional French furniture design, but also modern in line and use of materials and always in excellent taste.

This beautiful haute Art Deco piece would make a stunning statement piece in any contemporary home.

The highlight of Jules Leleu sales has to be the Grande Commode, constructed in shagreen, mahogany and gilt bronze which realised 198,750 Euros at Sotheby’s Paris, 24 November 2010.