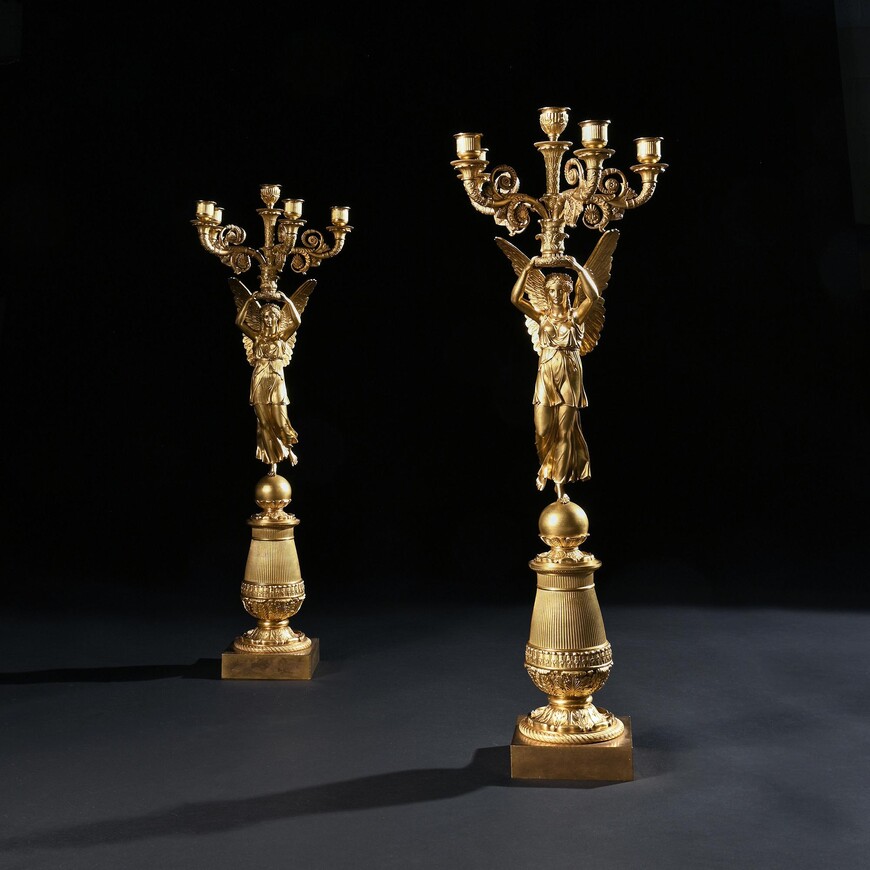 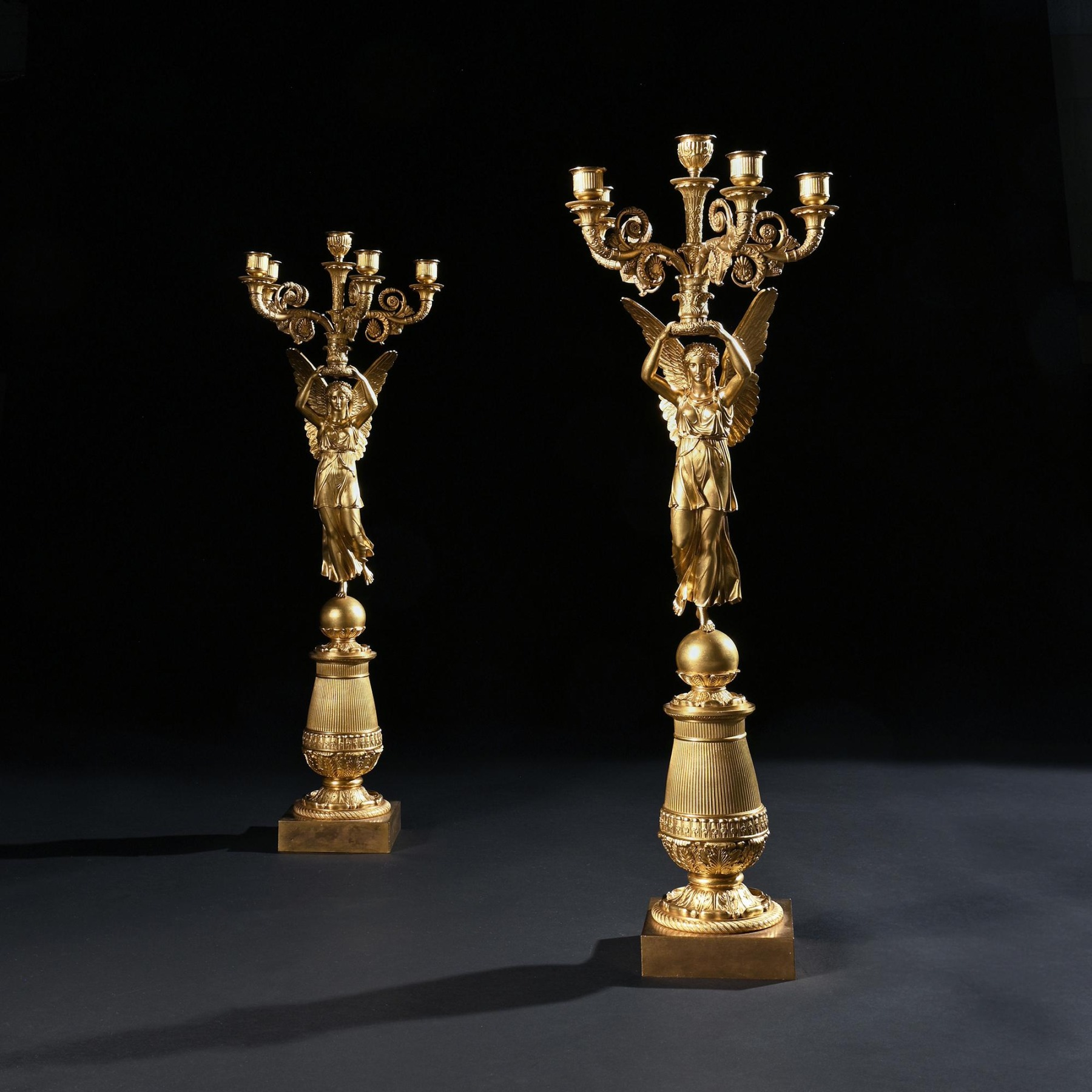 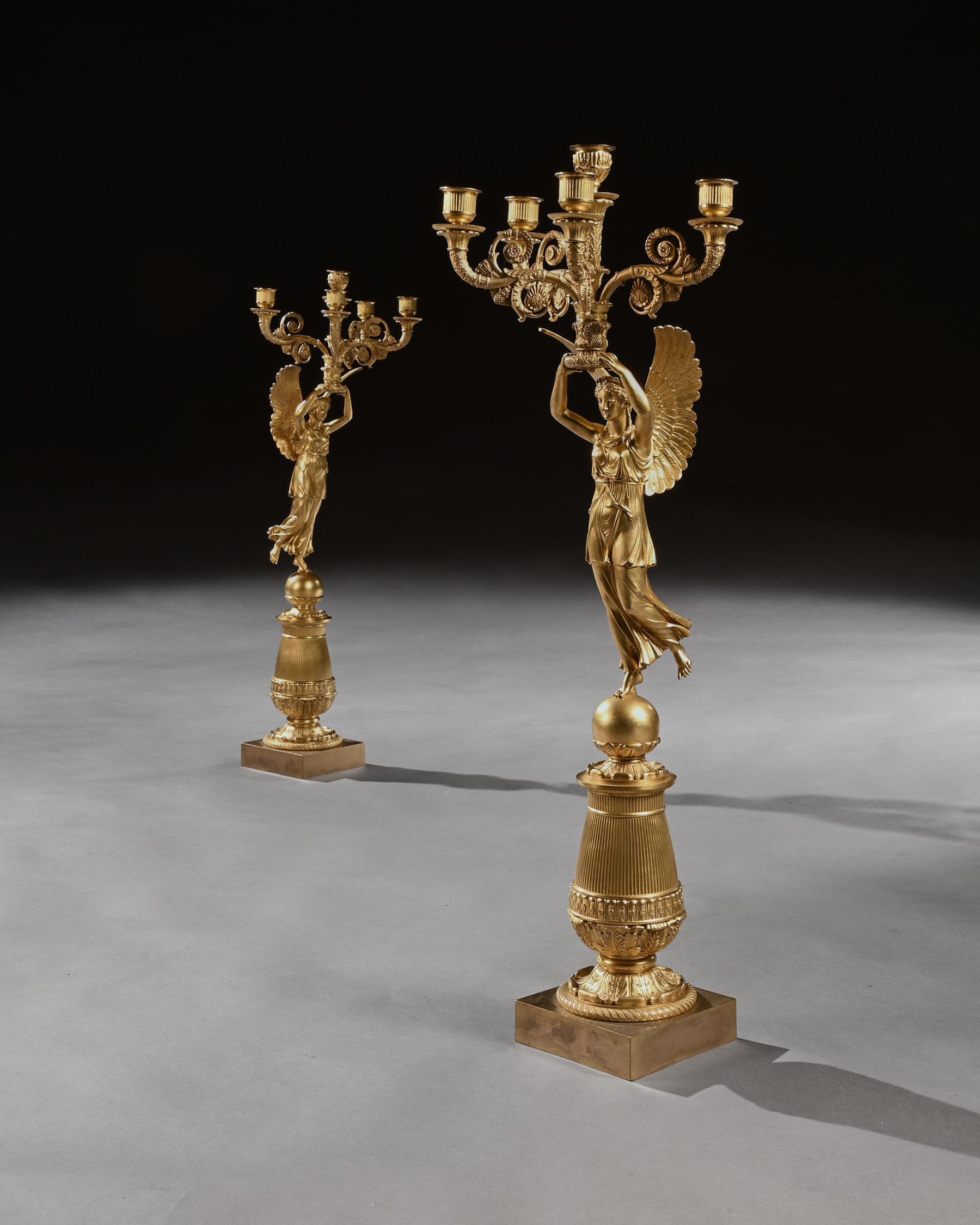 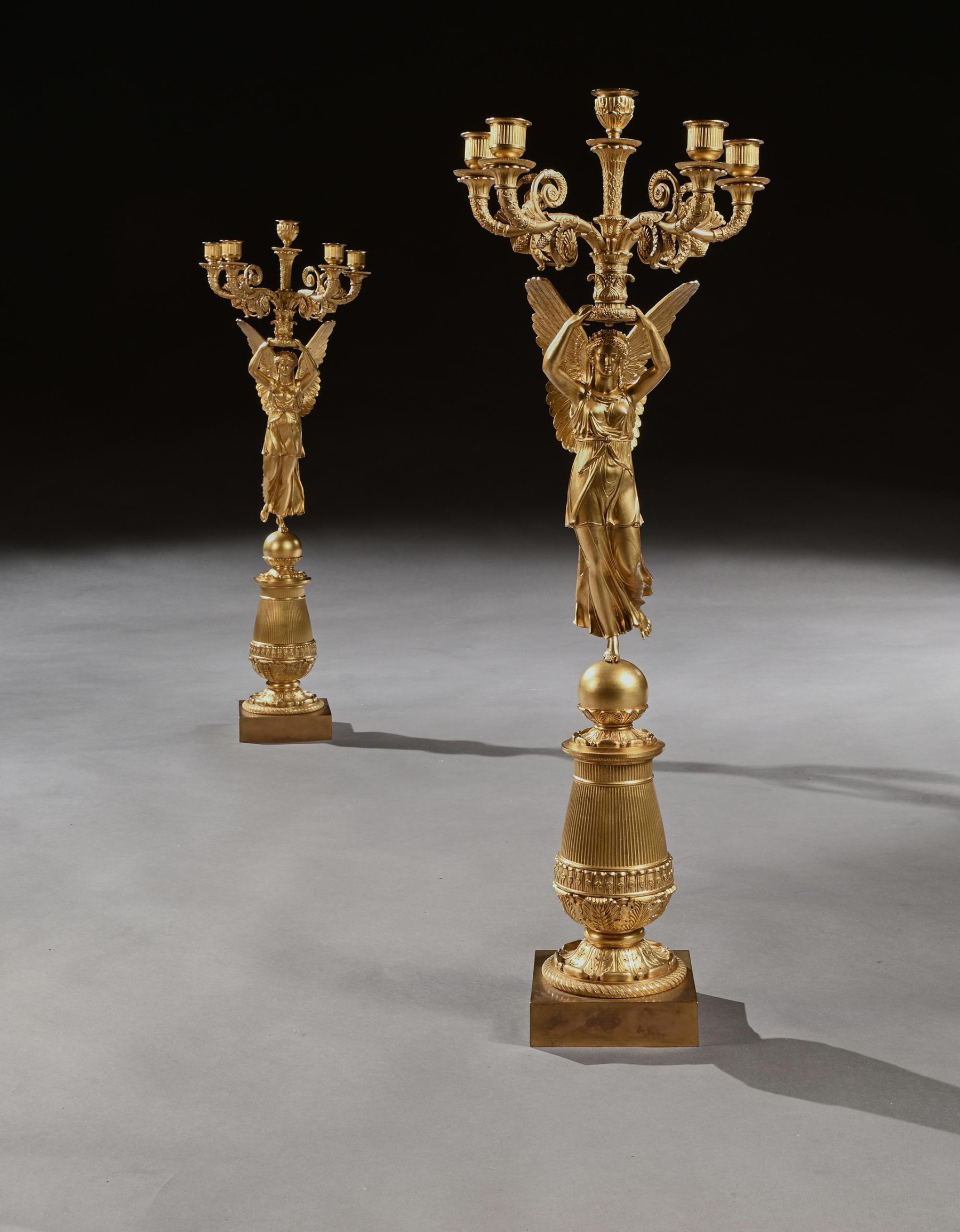 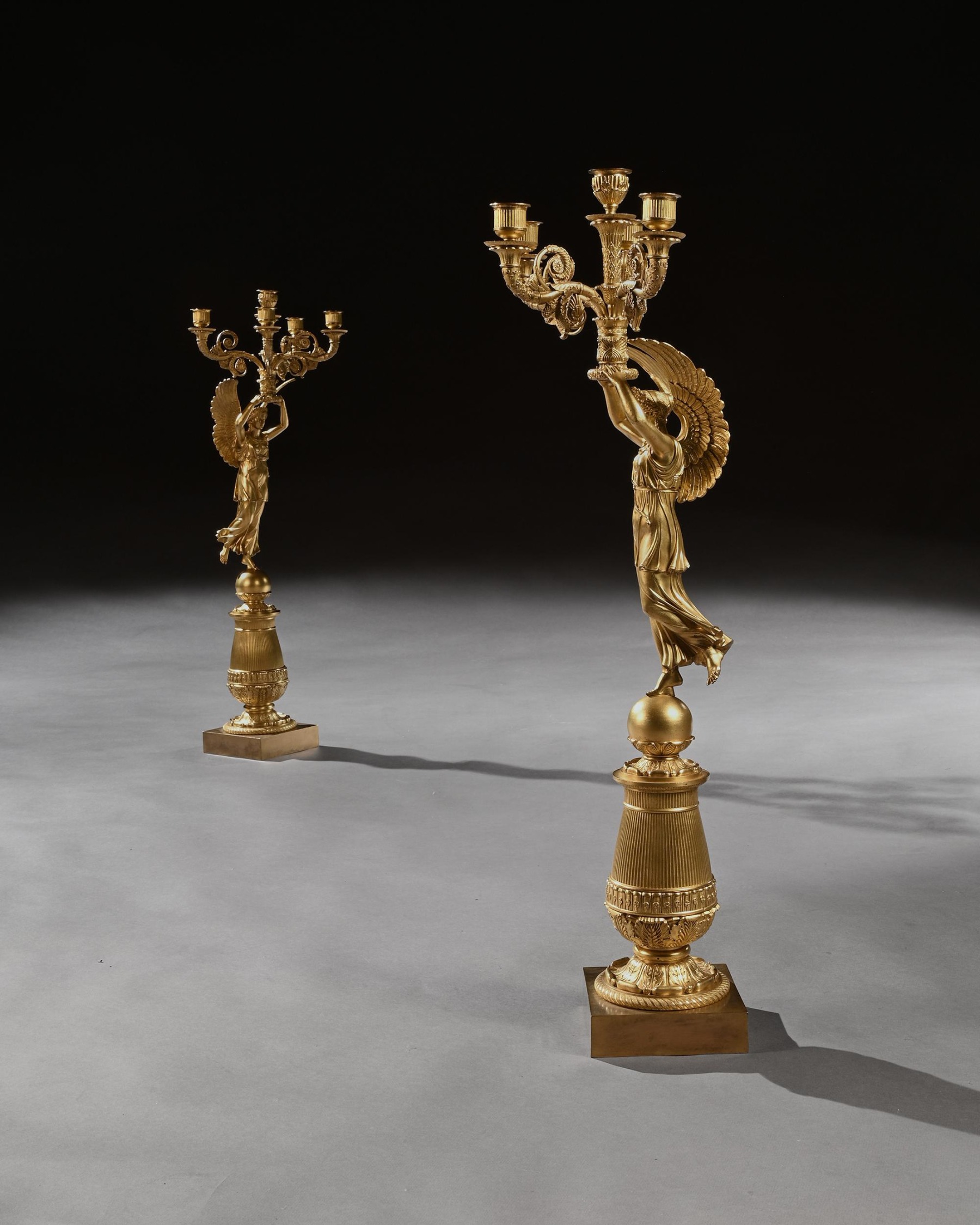 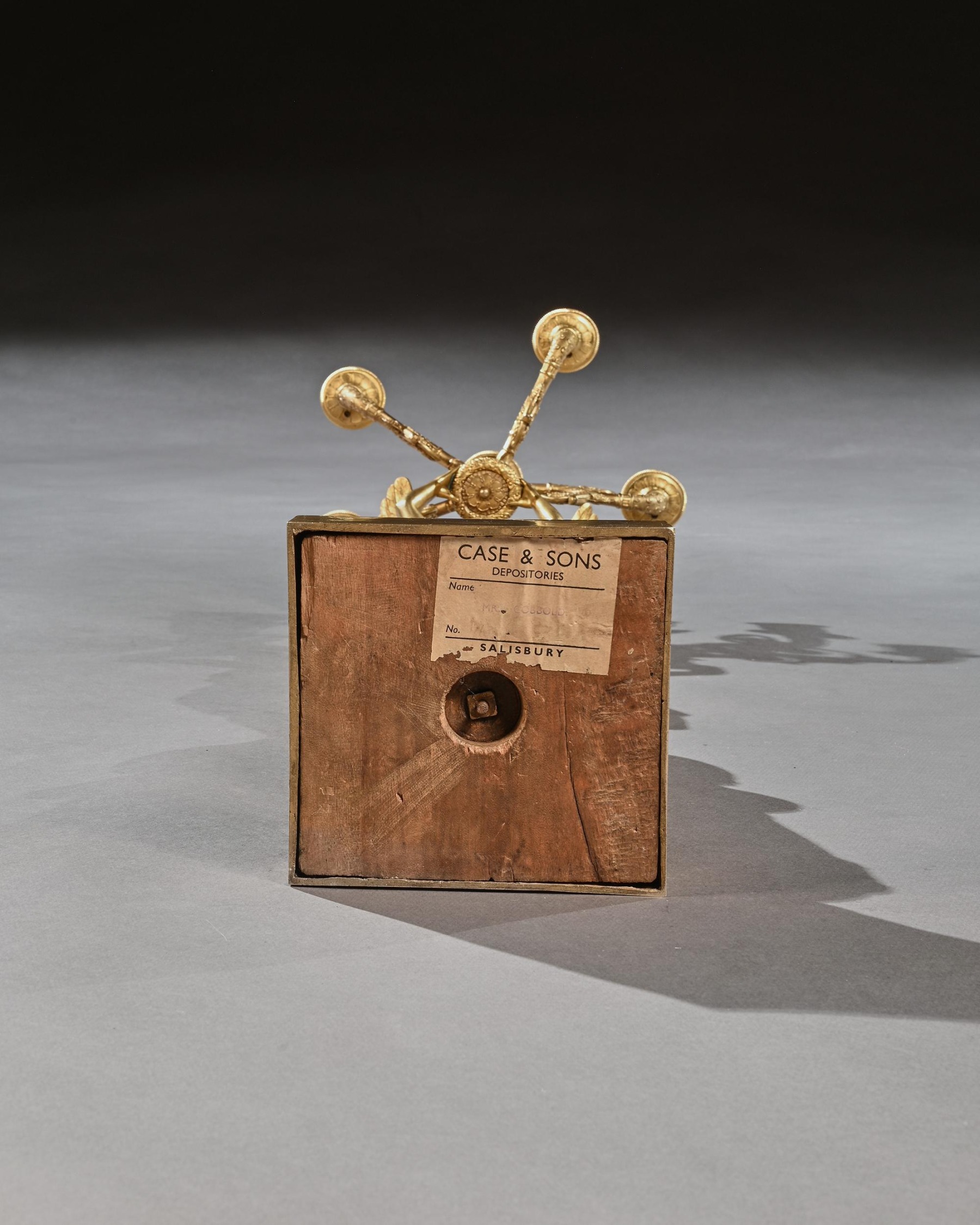 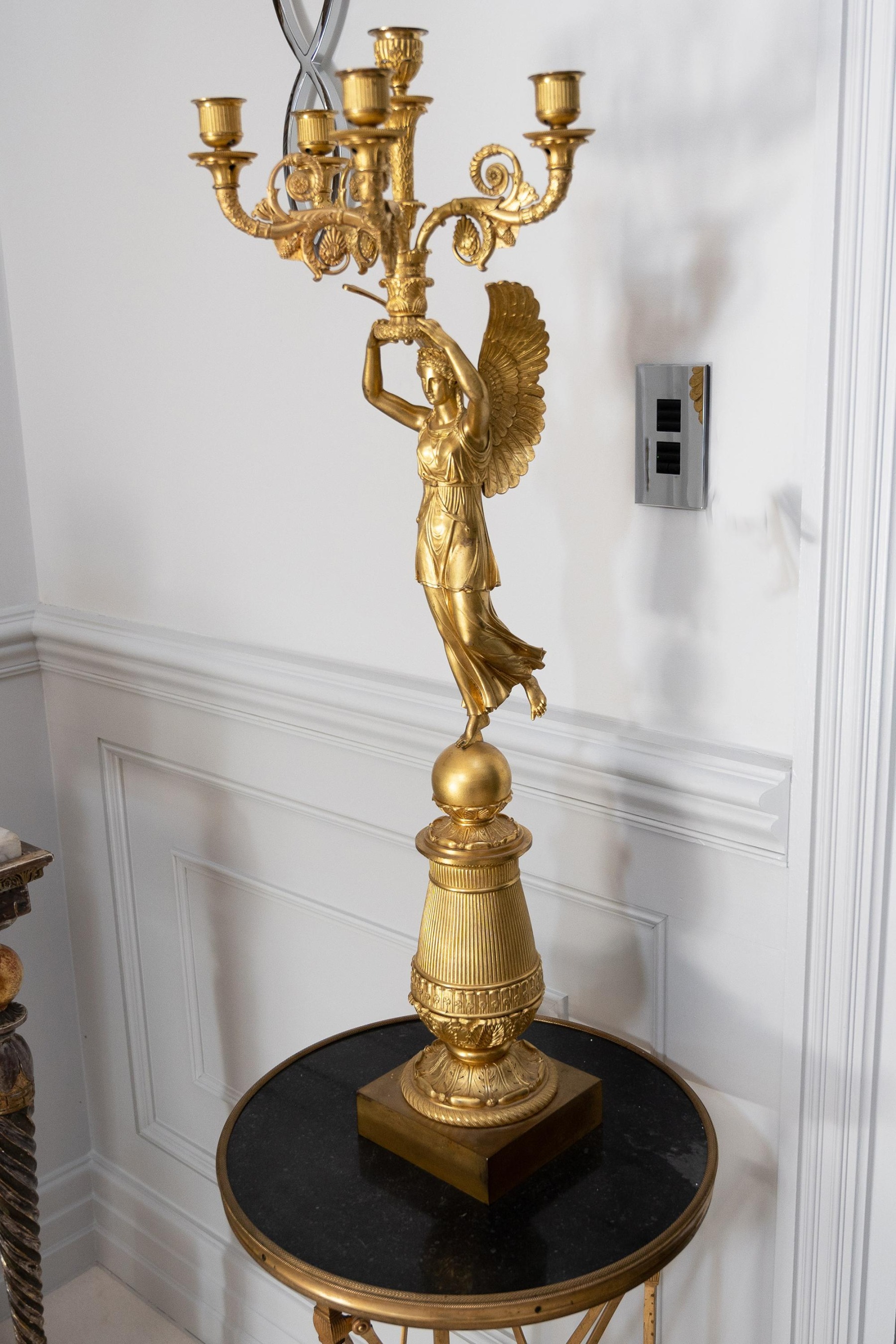 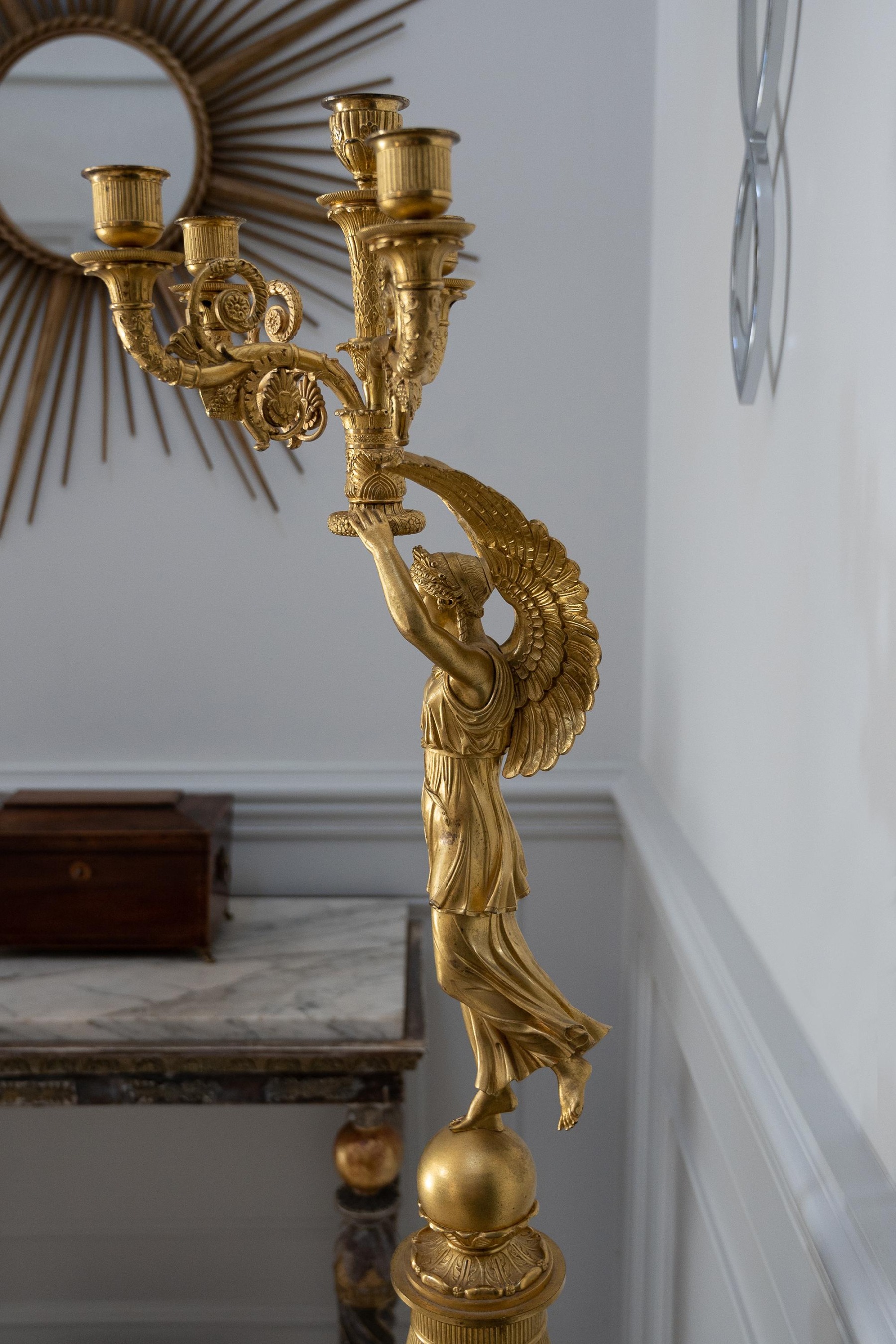 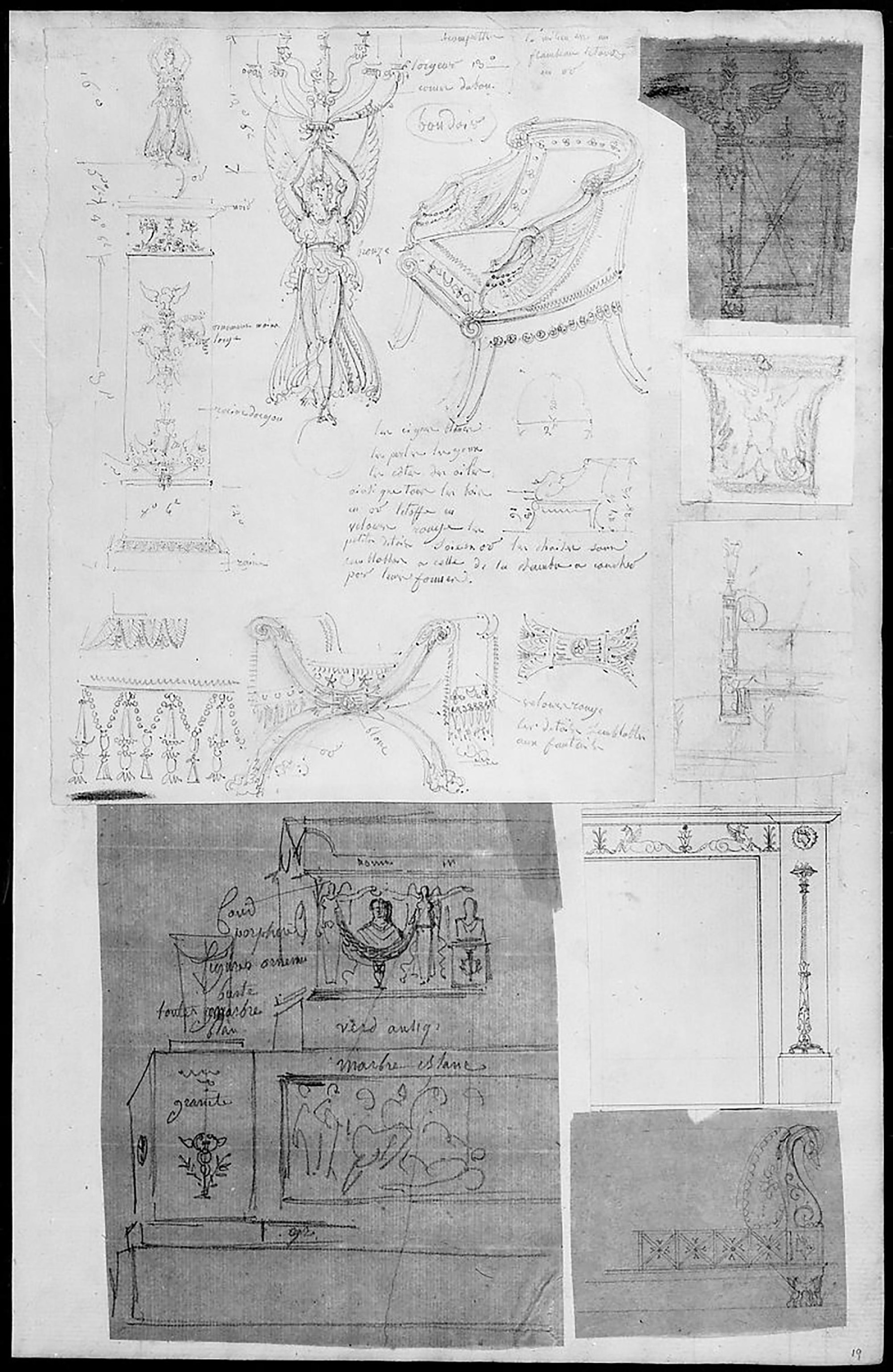 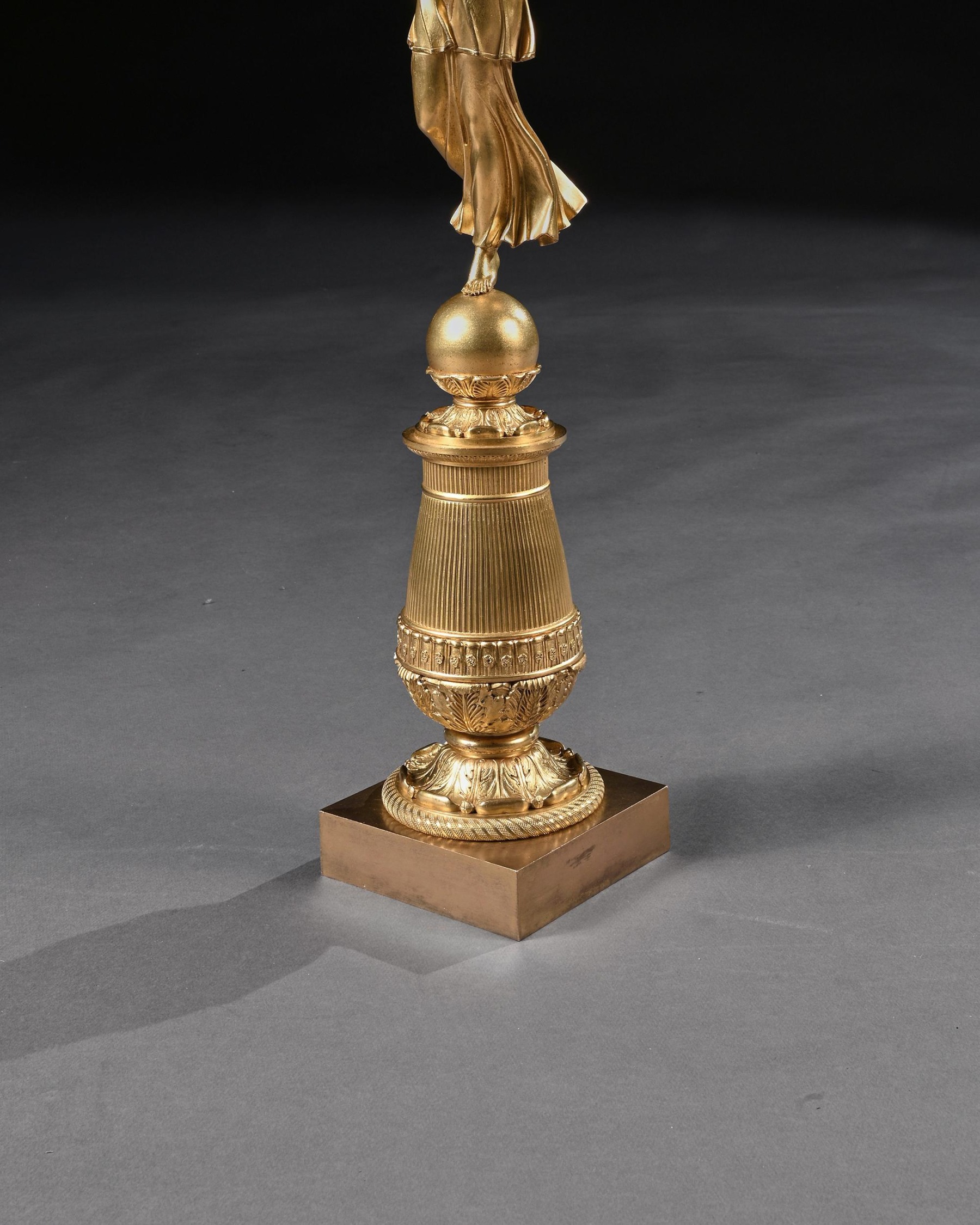 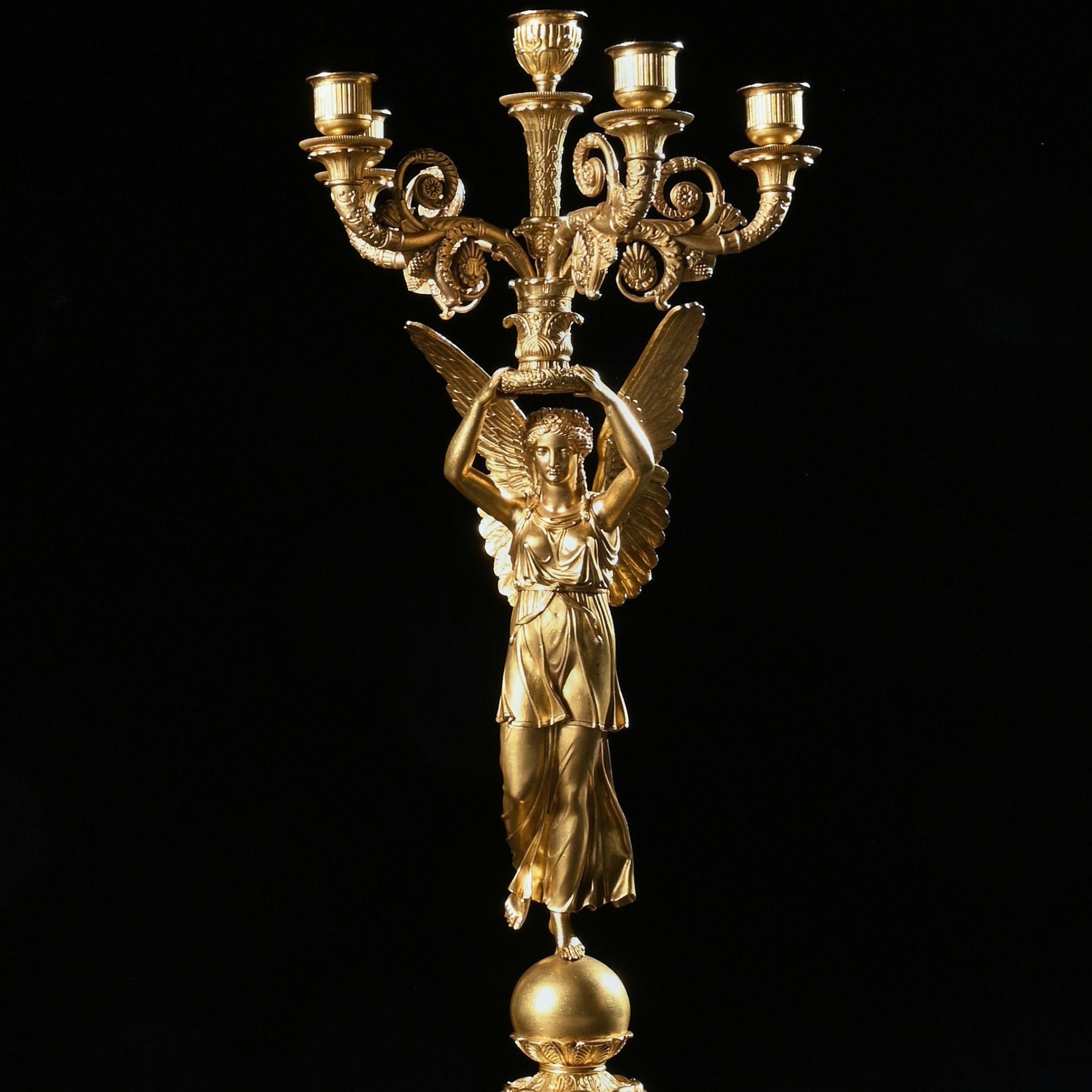 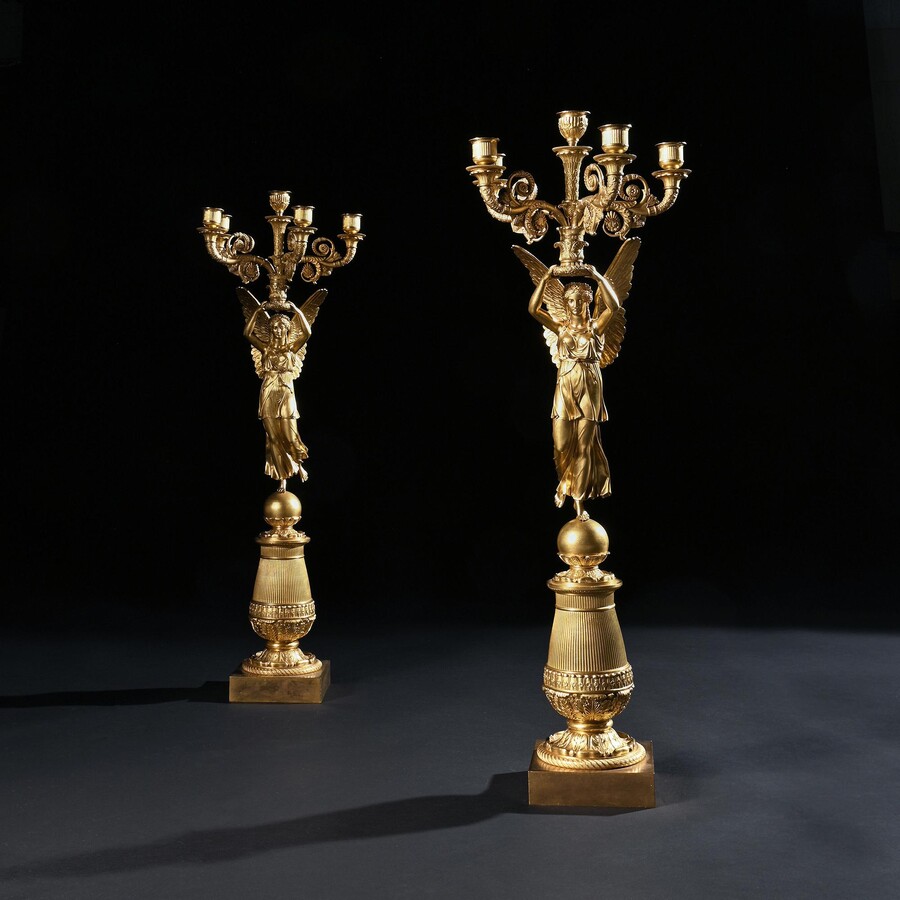 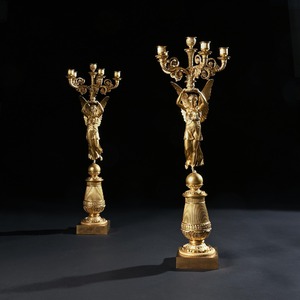 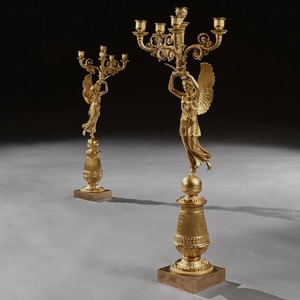 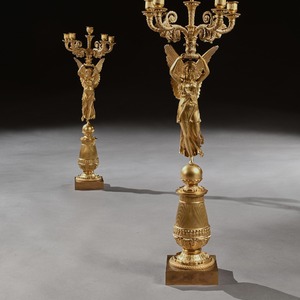 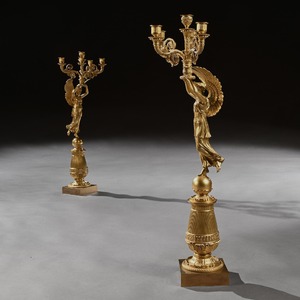 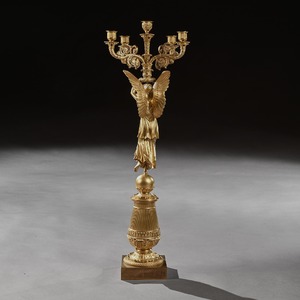 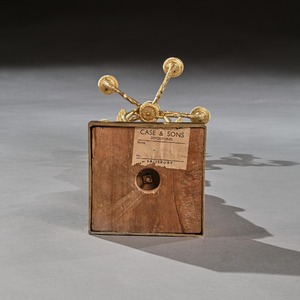 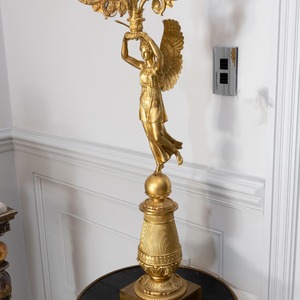 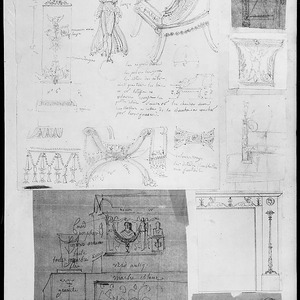 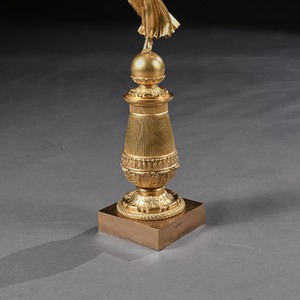 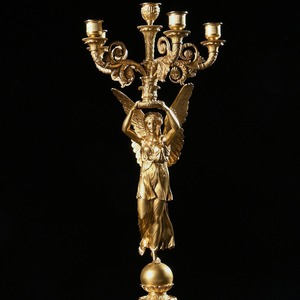 A pair of exceptionally elegant and important late Empire five-light figural candelabra ‘A la Victoire’ in gilt-bronze, attributed to Pierre-Philippe Thomire, after a design by Charles Percier. Imposing size at 81cm in height.

Superbly cast, in the Neo-Classical style, the five scrolling foliate candle branches enclosing central sconces issuing from a circular wreath supported by the winged figure of Victory (Nike), wearing diaphanous robes gathered by a sash above a long underskirt splaying out from above her ankles, with beautifully feathered wings flowing behind her as she looks straight ahead. Each figure standing on one foot, the other bent, resting on a plain sphere over a reeded palmette-cast baluster pedestal raised on square plinth. Wonderful colour and patina, pierced for electricity, old inventory label to the underside.

We are delighted to have been able to acquire these important candelabra as rarely does one get the opportunity to purchase items by P P Thomire, who was the leading Parisian gilt metal manufacturer and gilder of the early 19th century. As noted below candelabra of this caliber are often found in museums and important private & Royal collections.

These came from a private Swiss collection which had been in the family since the early 20th Century.

The present candelabra were certainly made after, or at least inspired by, designs by the architects Charles Percier (1764–1838) and Pierre-François-Léonard Fontaine (1762–1853) who were the two most influential figures in the field of Empire decoration and furnishing. Official architects to the court of Napoleon, their main responsibility was the renovation of the various royal residences. Their Recueil des décorations intérieures (1812) was an essential handbook of the Empire style. The personification of Victory as a winged figure became an integral element within Empire design as a symbol of military triumph through the intervention of Percier and Fontaine. The design for the present pair of candelabra is believed to have derived from a design by Charles Percier’s workshop in his drawings for Empress Josephine’s boudoir at Saint Cloud (*at the Metropolitan Museum in New York). This depicts the winged figure of Victory balanced on one foot supporting candelabra. The design was successfully exploited by Thomire (1751-1843) as well as his contemporary Claude Galle (1759-1815).

Pierre-Philippe Thomire was almost unrivalled as a bronzeur in this period. Thomire, who was born in Paris, followed his father's profession as a fondeur-ciseleur. His career was advanced when he studied under the great fondeur-doreur, Pierre Gouthière, from whom he acquired the most refined skills in chasing and gilding, in particular matt gilding 'dorure au matt', to produce a subtle grainy satin-like finish. By the late eighteenth century Thomire had achieved considerable renown, having enjoyed the patronage of Louis XVI. His name occurs often in the accounts of the Royal Furniture Repository between 1784-1789, in the ledgers of Louis XVI and in those of the manufactory of Sevres. After the French Revolution he returned to making decorative bronzes and thereafter enjoyed the patronage of Napoleon and subsequently the restored Bourbon monarchy, as well as foreign royalty and aristocracy.

Appointed a maître-fondeur in 1772, he set up his own business in 1776 following a collaboration with Jean-Louis Prieur in the decoration of Louis XVI's coronation coach. Other royal commissions followed, for instance he supplied gilt bronze chenets with flaming urns and sphinxes for the Louvre in 1786. Having assisted in the making of the mounts for the Sèvres Grands Vases (Musée du Louvre, Paris and Pitti Palace Florence), in 1783 he succeeded Jean-Claude-Thomas Duplessis as chief supplier of mounts for Sèvres, which was an important post and assured Thomire's future. From 1804 he ran the leading bronze manufactory in Paris. In 1806 Thomire became the first bronzier to be awarded a gold medal at the Exposition des Produits de l'Industrie. He won another gold in 1809, in which year he was also appointed ciseleur de l'Empereur. 1823 saw Thomire winning a gold medal for sculpture in Paris as well as his retirement from the firm though he continued to produce sculptures and regularly exhibited at the Paris Salon until 1834. His business was continued by his two sons-in-law up until 1852 although Thomire's legacy has continued for much longer.

His work has often been confused with that of his contemporary Claude Galle with whom he sometimes collaborated. Today Thomire's work can be found in the world's finest collections including numerous former royal and imperial French châteaux, the Musée du Louvre in Paris, the Hermitage Museum in Saint Petersburg, the Metropolitan Museum, New York, the J. Paul Getty Museum, California, as well as the Victoria & Albert Museum, London and the British Royal Collections.

Hans Ottomeyer and Peter Pröschel, "Vergoldete Bronzen", 1986, p. 328, pl. 5.2.2, note that a related drawing of candelabra appears in Thomire's album of 1817, now in the Stockholm Nationalmuseum. And p. 392, pl. 5.17.9, illustrating a candelabrum by Thomire of 1832 in the Grand Trianon, Versailles with Victory wearing a very similar dress and closely related hairstyle and crown.

A signed pair of candelabra of similar design depicting Winged Victory by Thomire can be found in the Metropolitan Museum of New York (Acc.No. 26.256.2.3) which is also clearly based on Piercier’s design above https://www.metmuseum.org/art/collection/search/195519

A set of four bronze, five-light candelabra, each in the form of patinated winged Victory holding, with outstretched arms, a gilt laurel wreath by Thomire, Paris (c.1810-12). Again, Victory is balanced on one foot, here on a starred sphere and a square plinth. Acquired by the Prince Regent for Brighton Pavilion. http://www.rct.uk/collection/search/14/collection/11853/set-of-candelabra