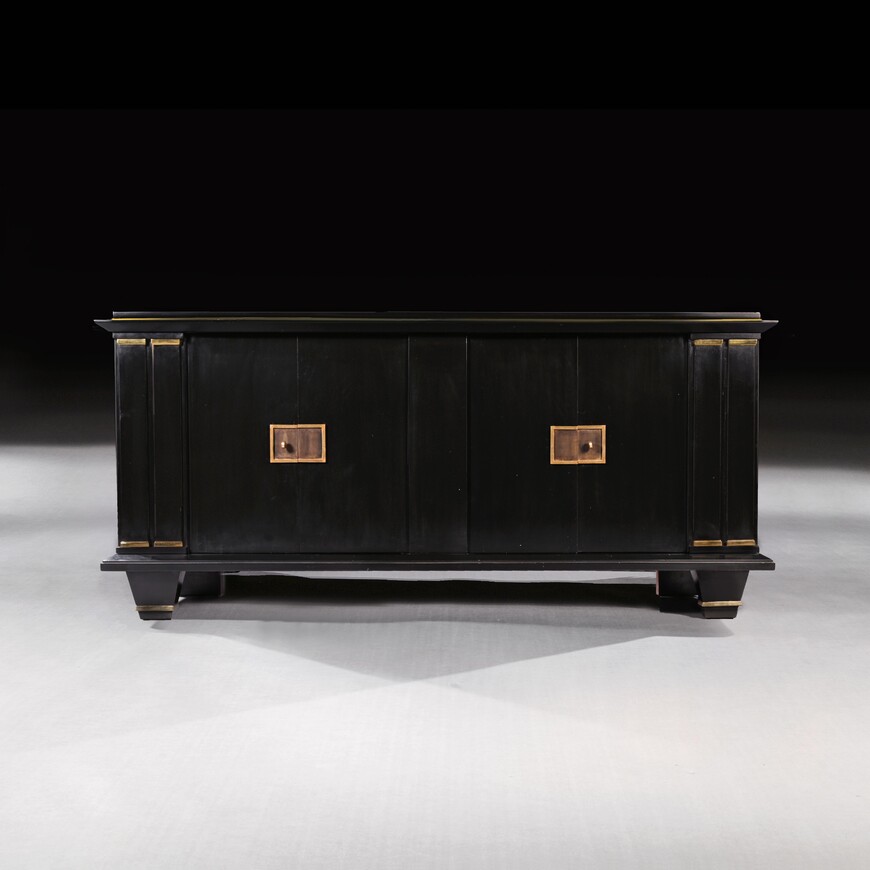 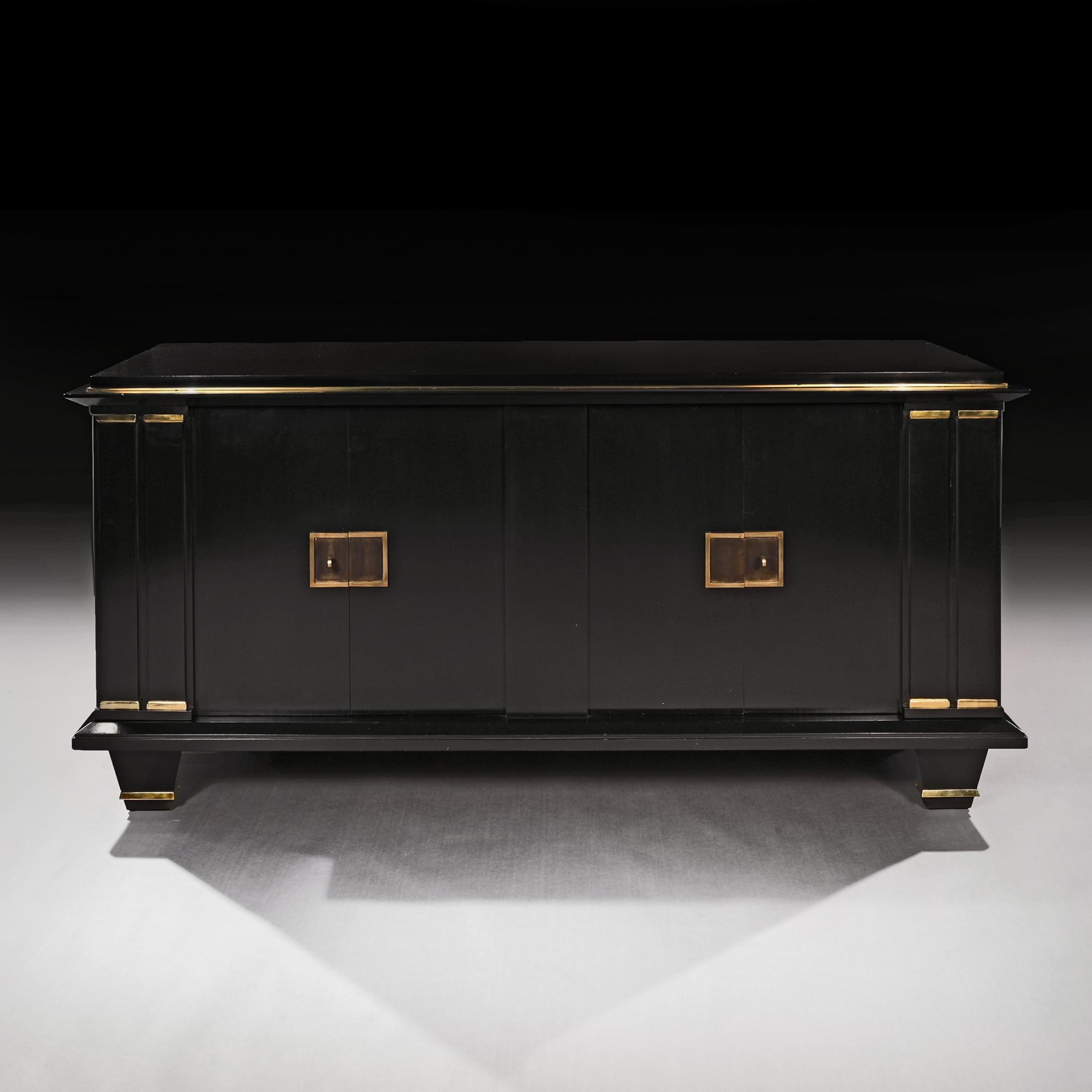 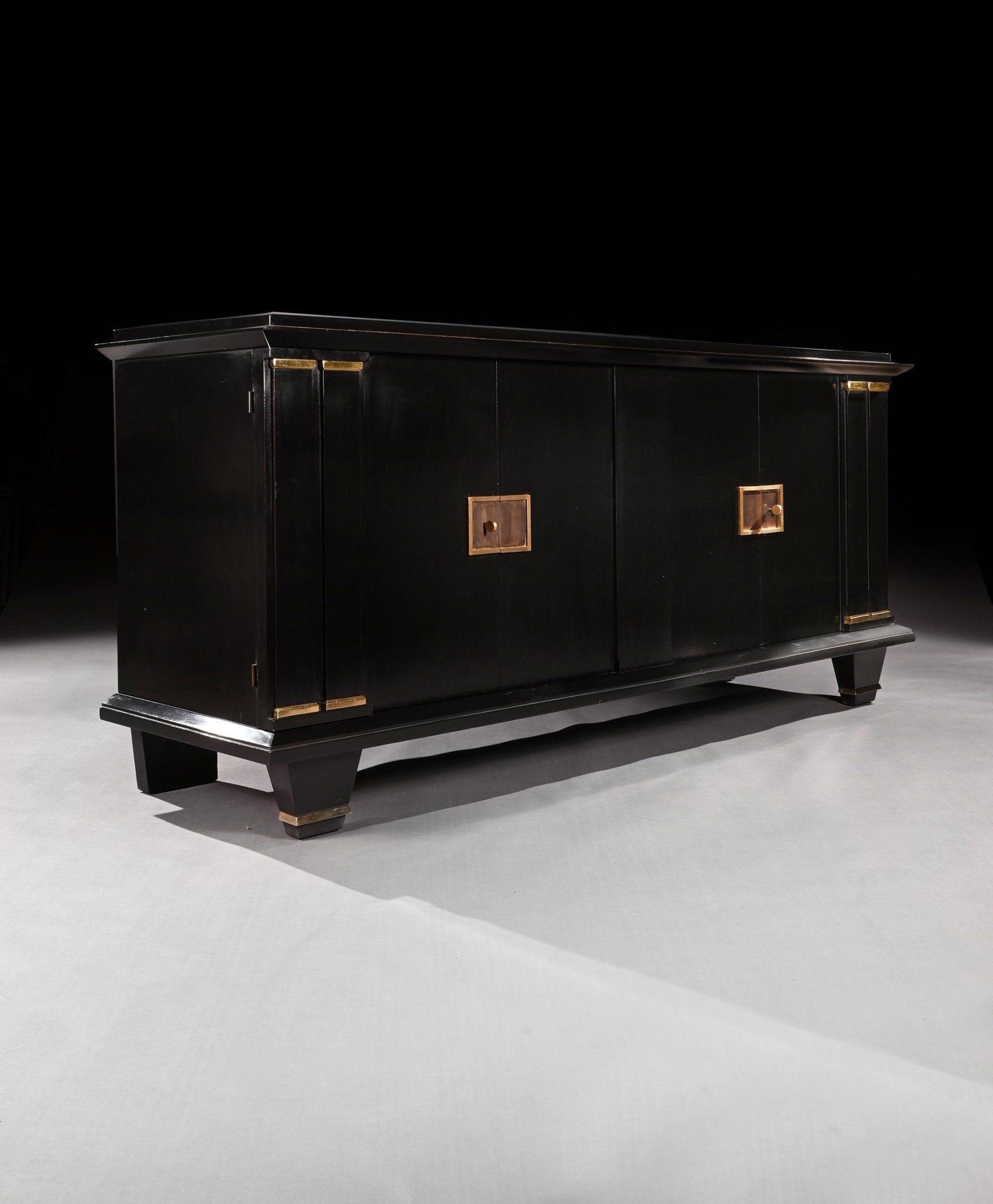 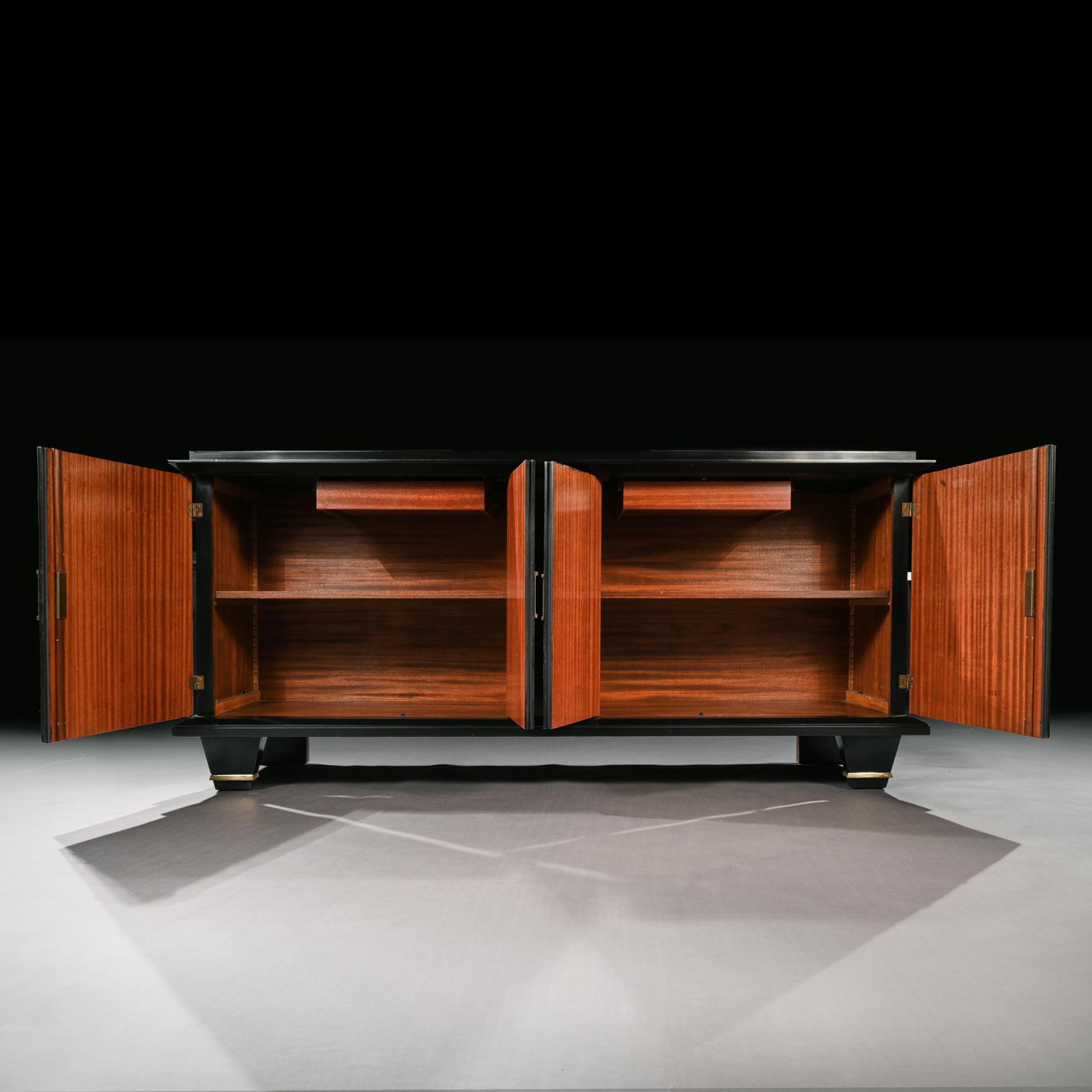 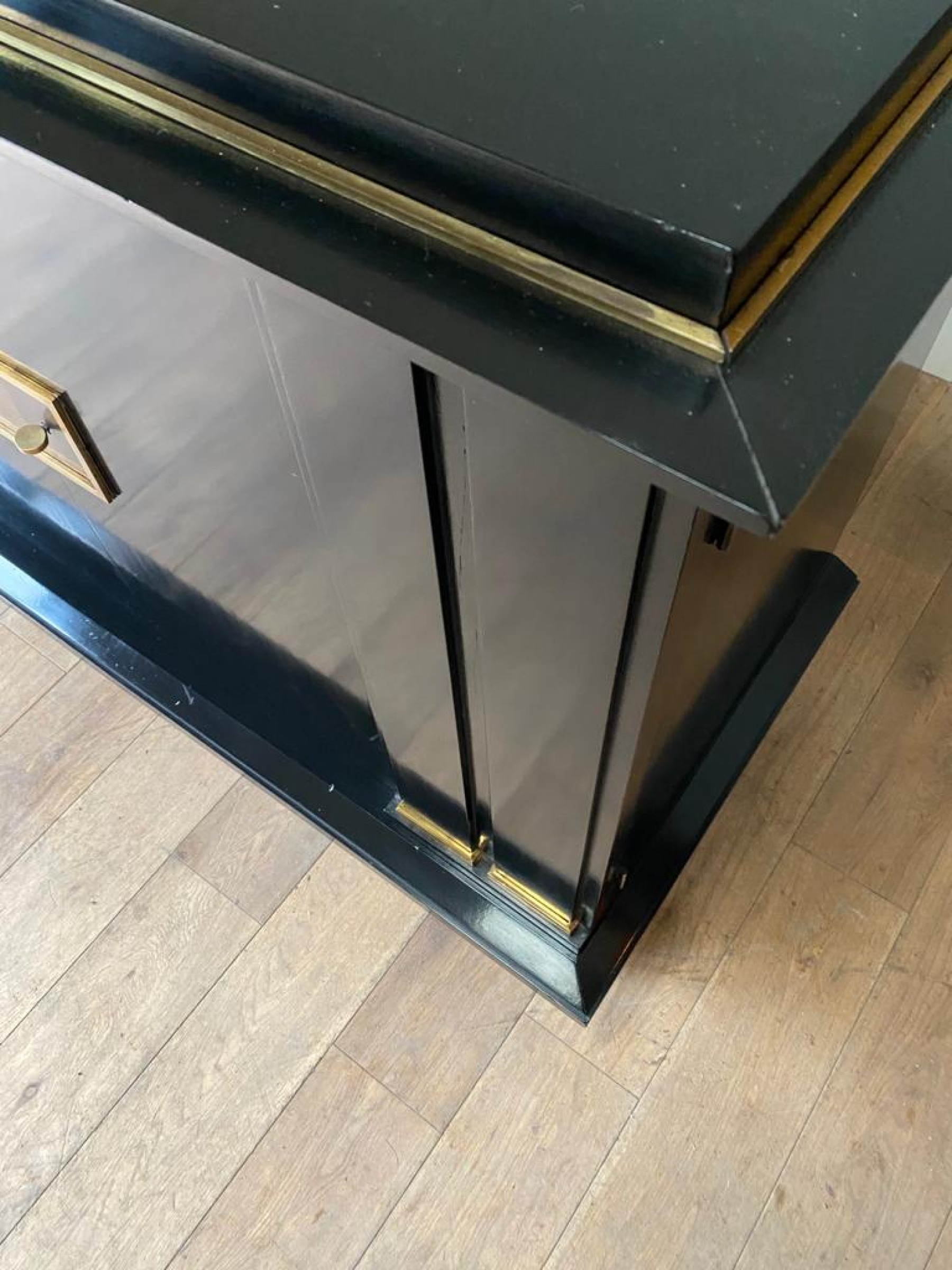 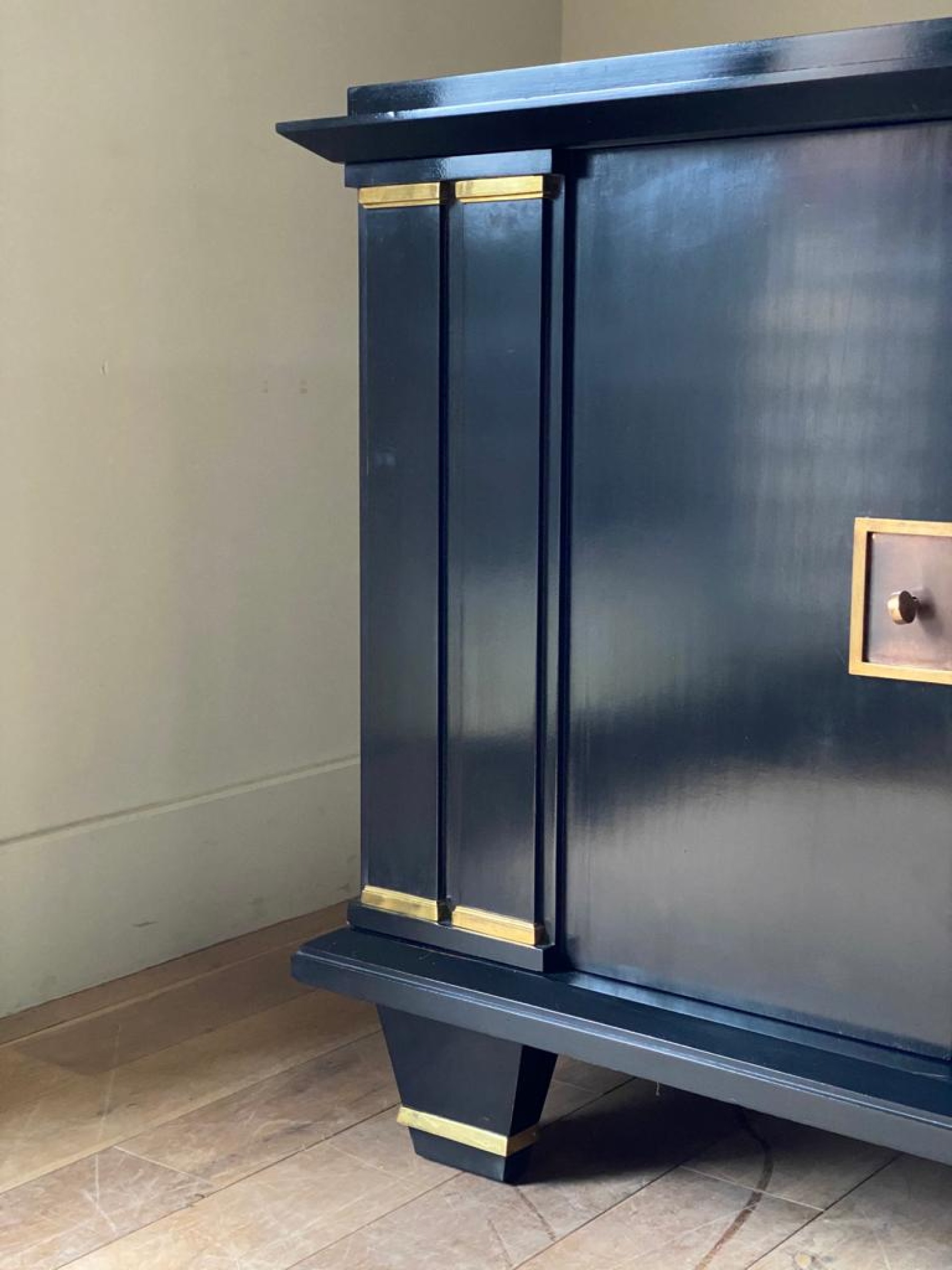 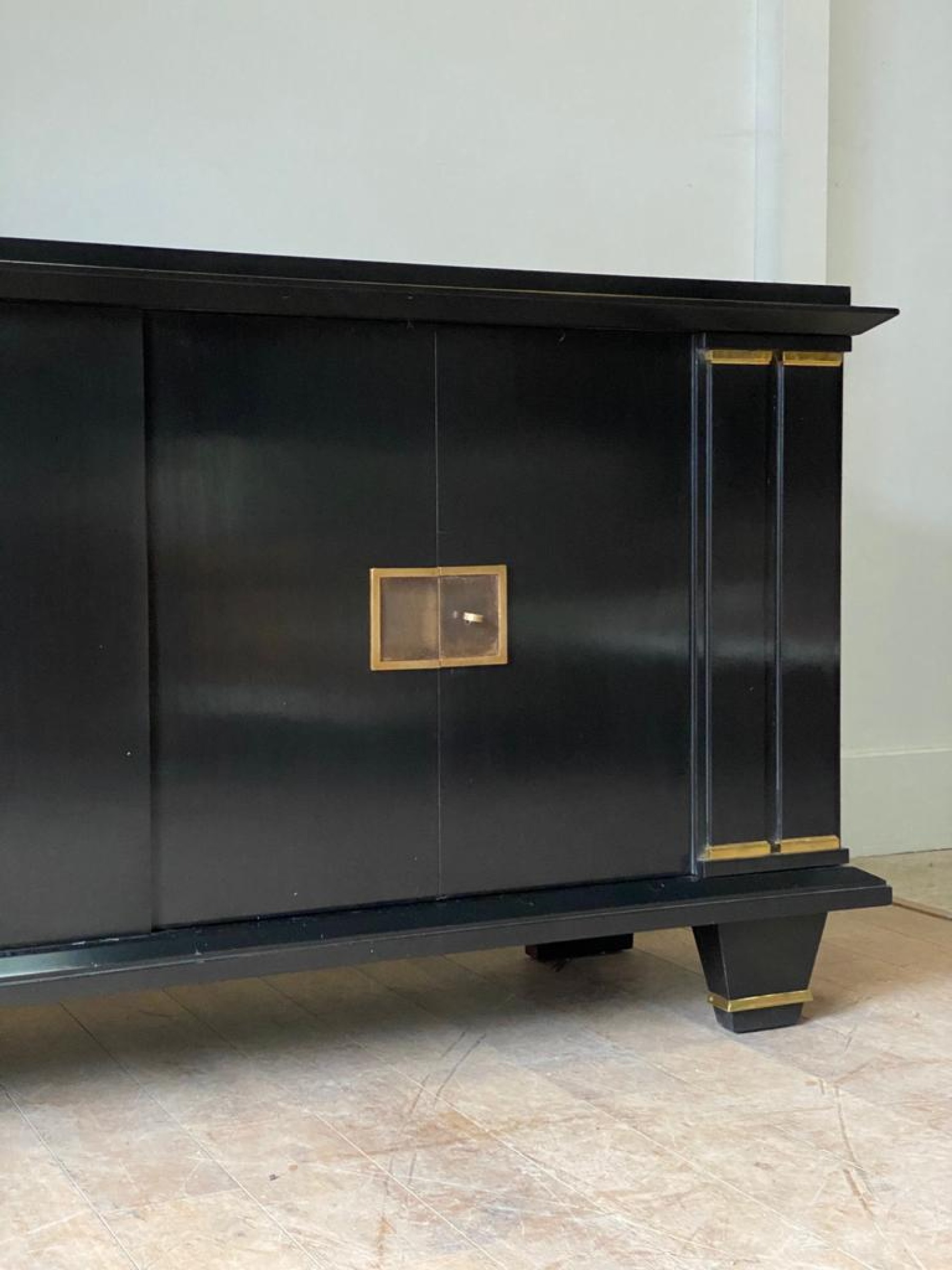 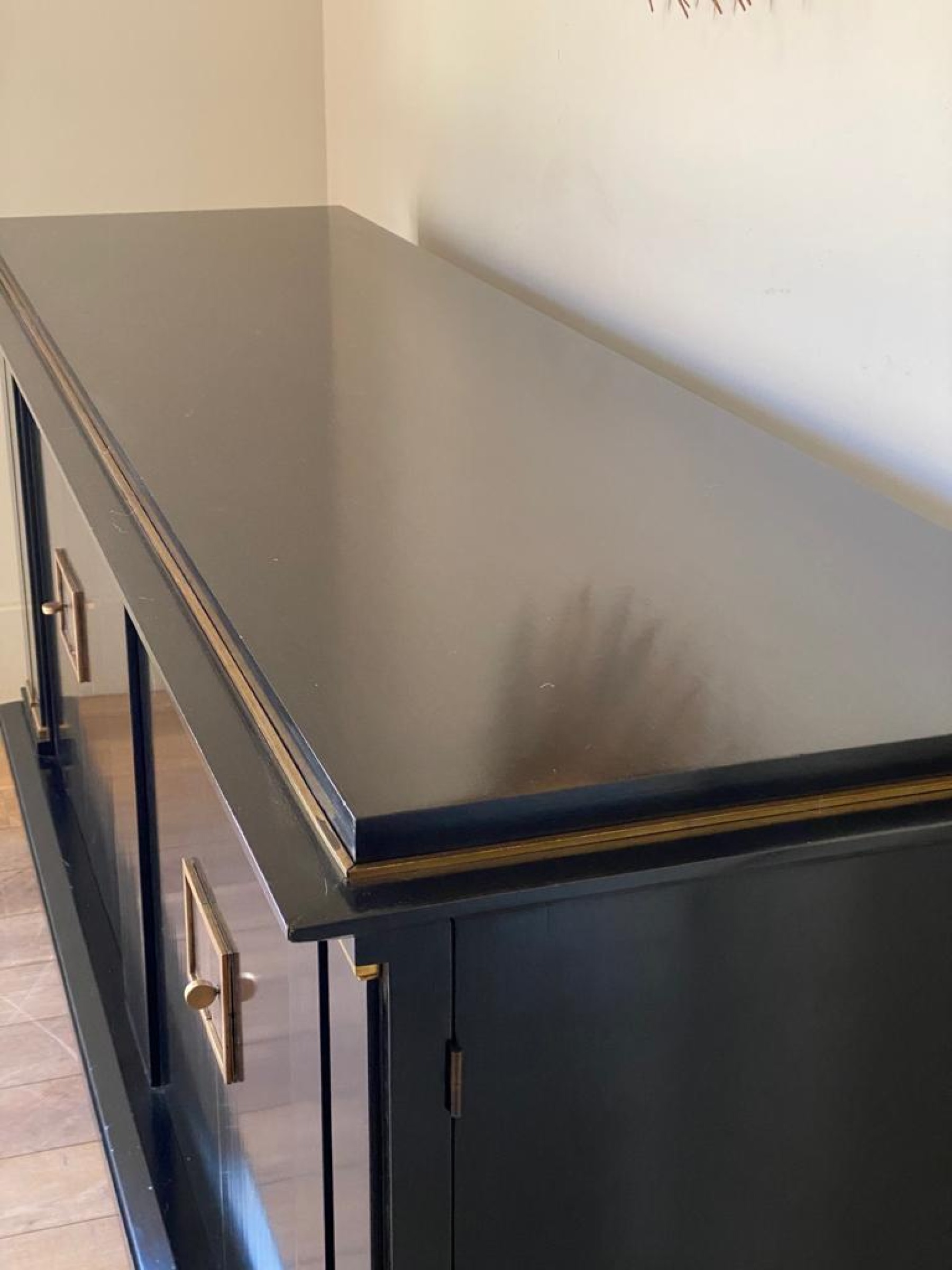 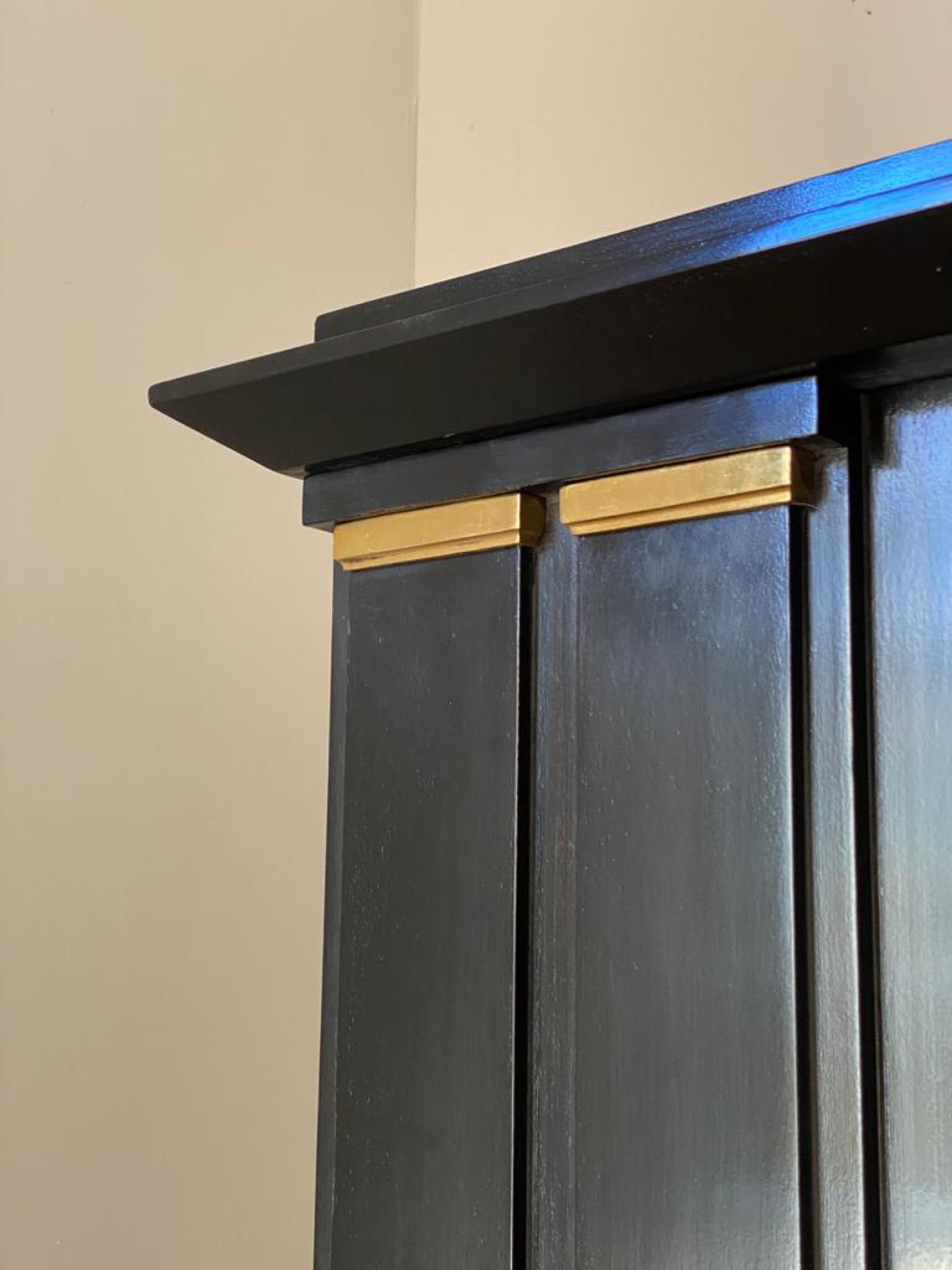 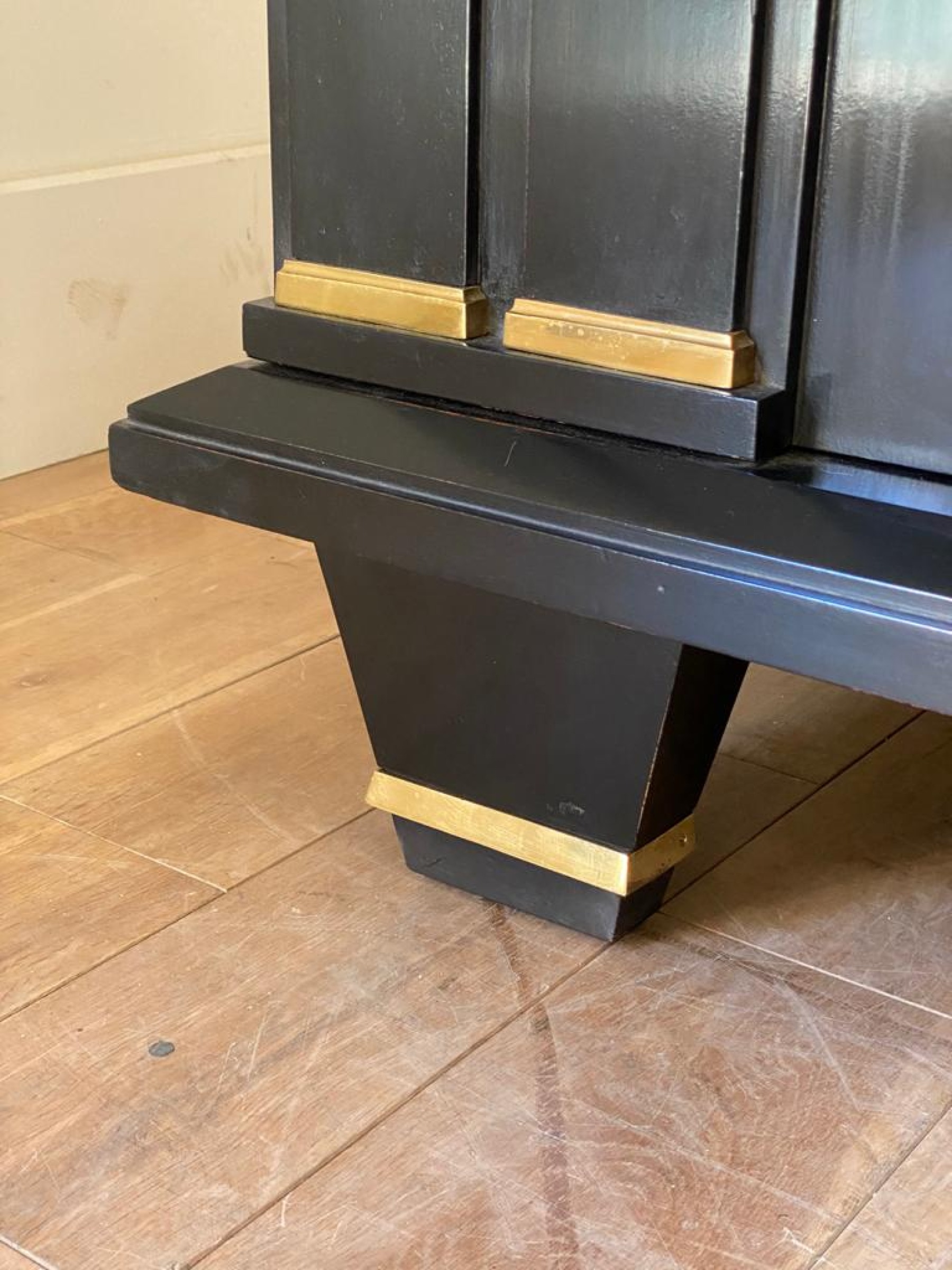 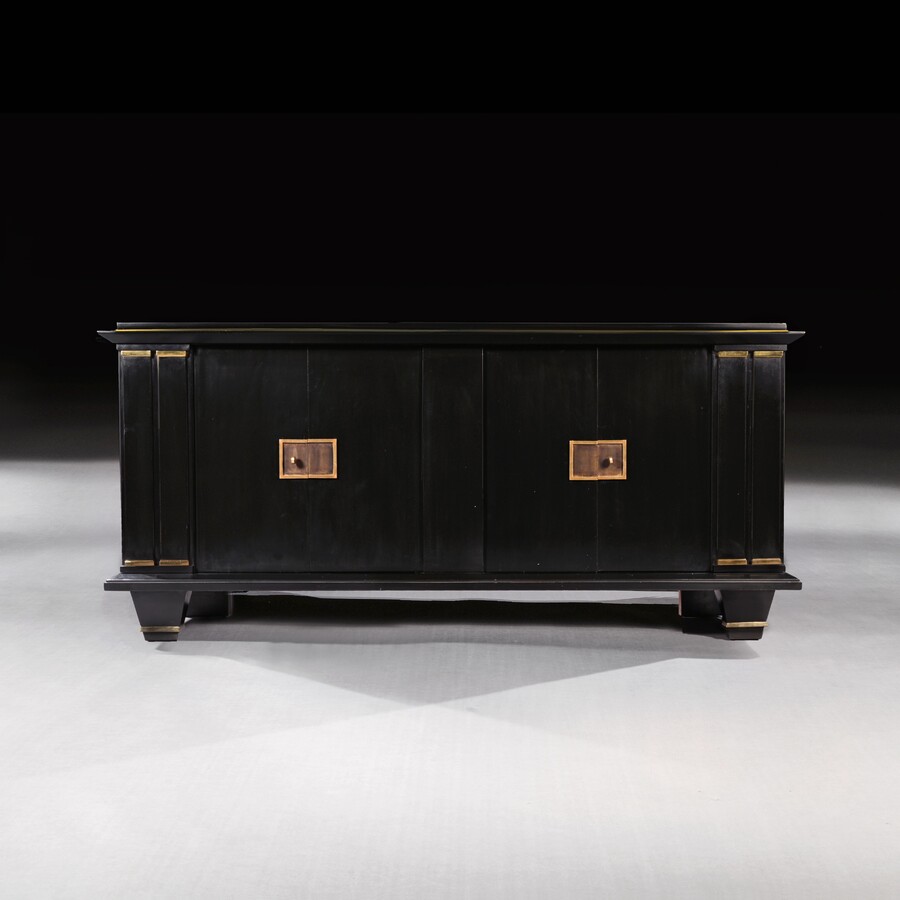 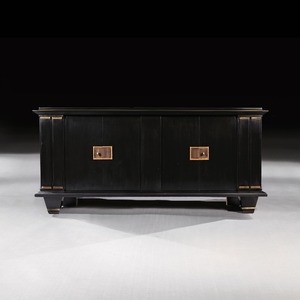 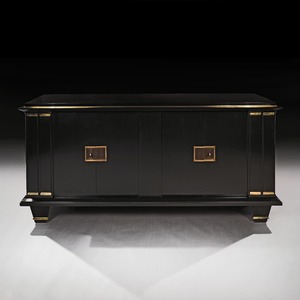 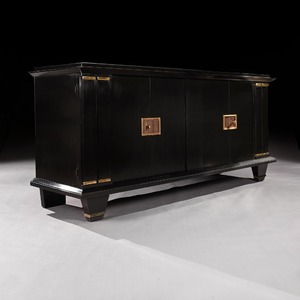 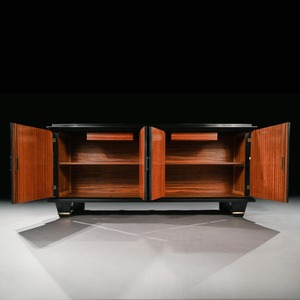 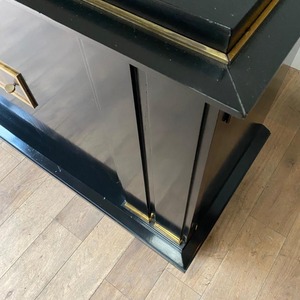 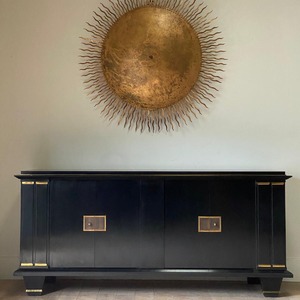 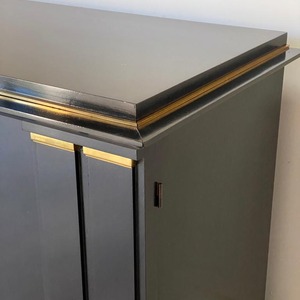 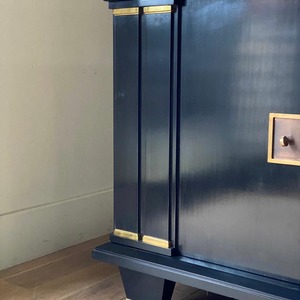 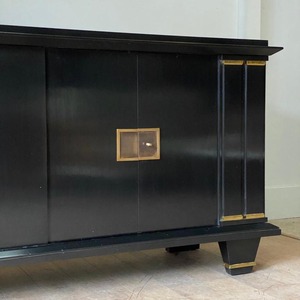 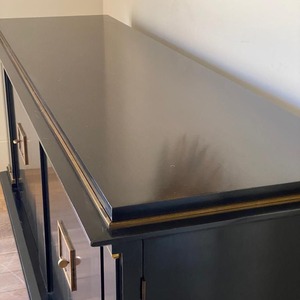 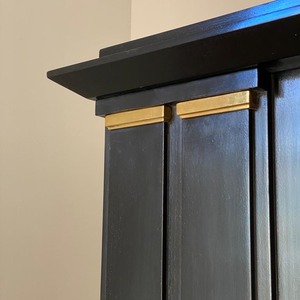 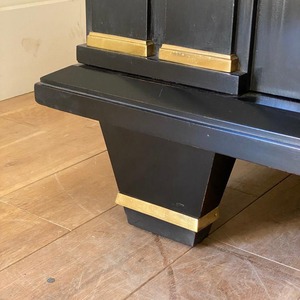 A chic French Modernist ebonised four door sideboard from the Art Deco period, gilt bronze mounted, very much in the manner which could be attributable to Jacque Adnet (1900-1984).

Of superb construction and extremely well drawn, this sideboard / enfilade evokes all the characteristics of the renowned French Art Deco modernist designer, architect and interior designer Jacques Adnet. Adnet embraced modern materials with a minimalism, yet retained the principles of classic style and superb craftsmanship as can be seen in this sideboard, elegant and modern in style yet with a traditional neoclassical undertone.

In excellent condition with original working keys, the sideboard will break down if needed for transport. The quality is similar to the Jules Leleu sideboard we also have in stock.

A identical matching two version of this enfilade is also in stock and to be listed on the website shortly.

An icon of luxurious French Modernism, Jacques Adnet grew up with the 20th Century attending the Municipal School of Design in Auxerre and the École des Beaux-Arts Paris.

He believed in the functional aspect of furniture combined with geometrical simplicity and was inspired by pre-classical styles and was well acquainted with traditional furniture.

Until the age of 28, Jacques lived and worked hand in hand with his twin brother Jean at the Studio La Maitrise, where they met the Art Déco designer Maurice Dufrene. From 1928 to 1960, he directed La Compagnie des Arts Francais. His team of decorators included Francois Jourdain, Charlotte Perriand and Georges Jouve. Adnet presided over the Salon des Artistes Decorateurs from 1947 to 1949.