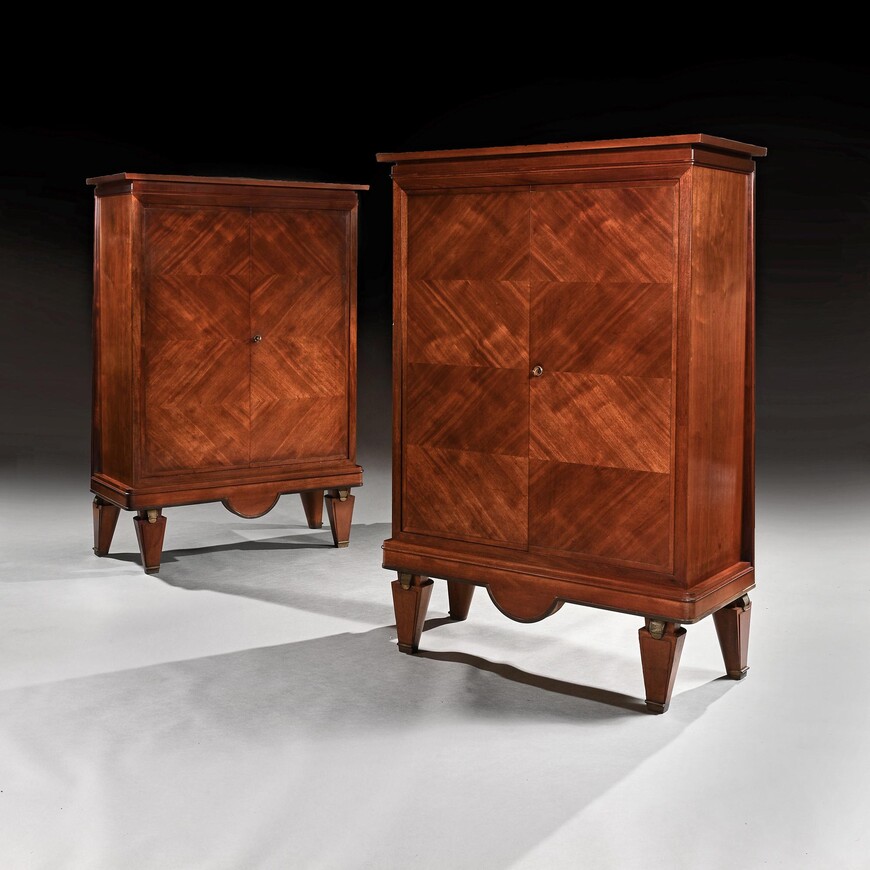 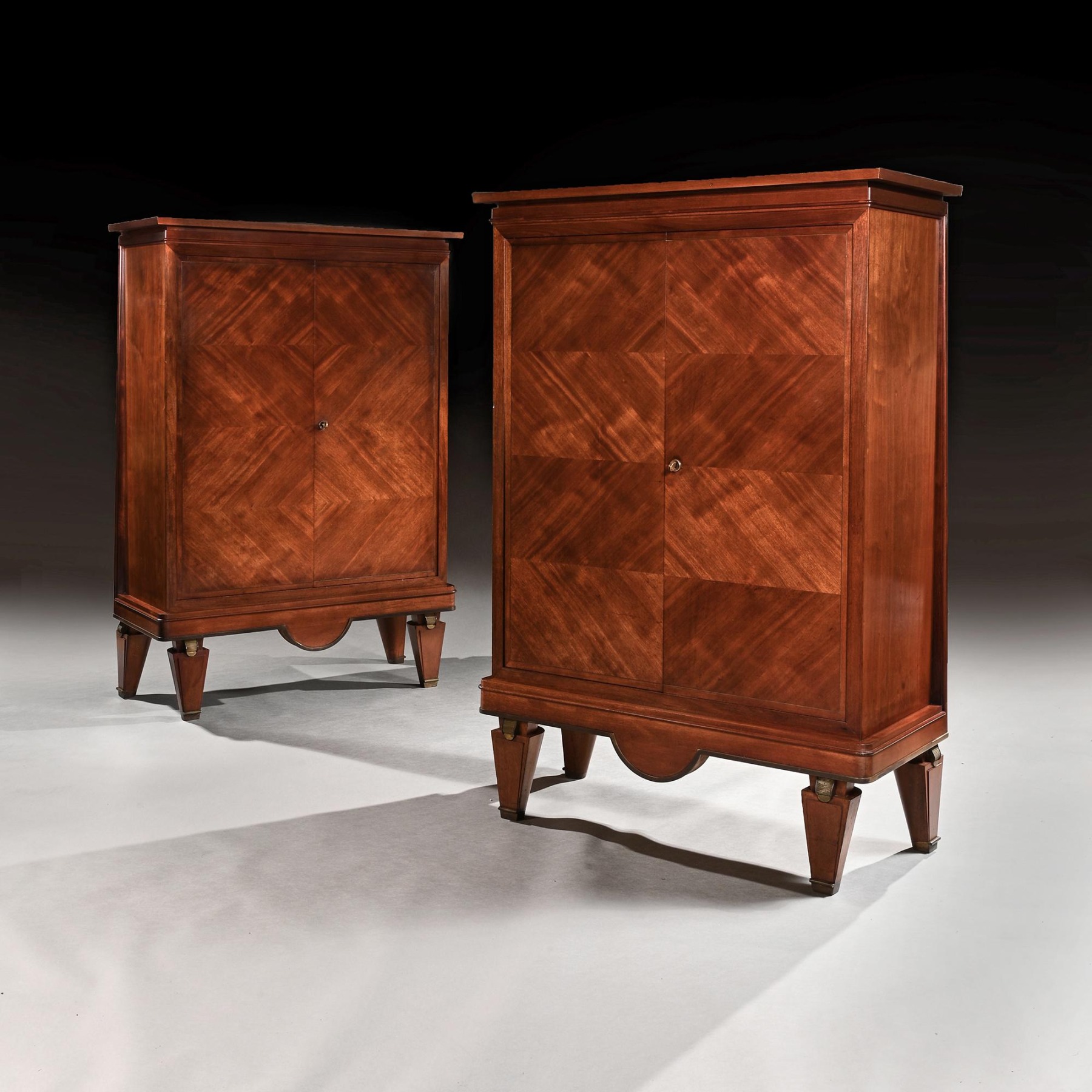 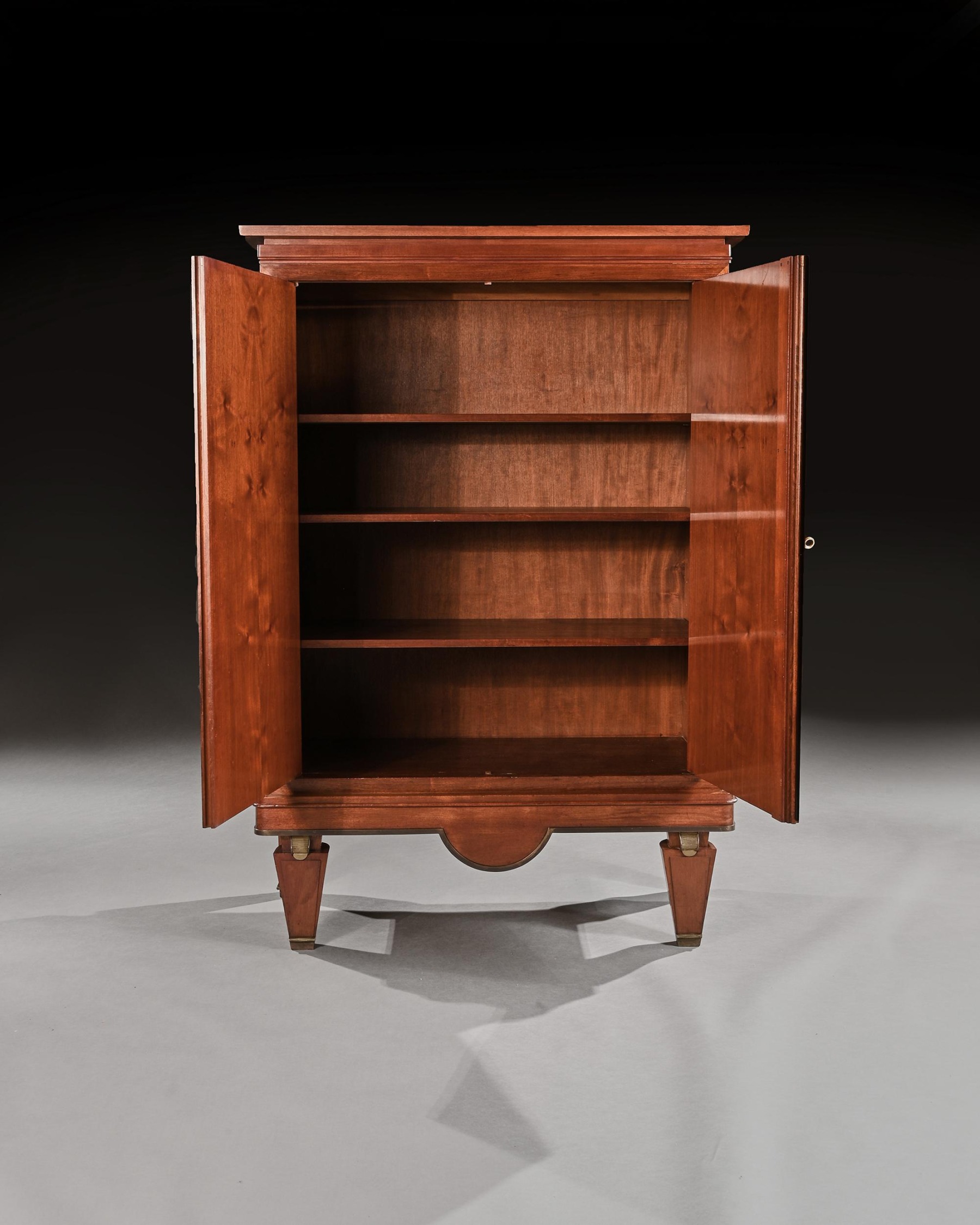 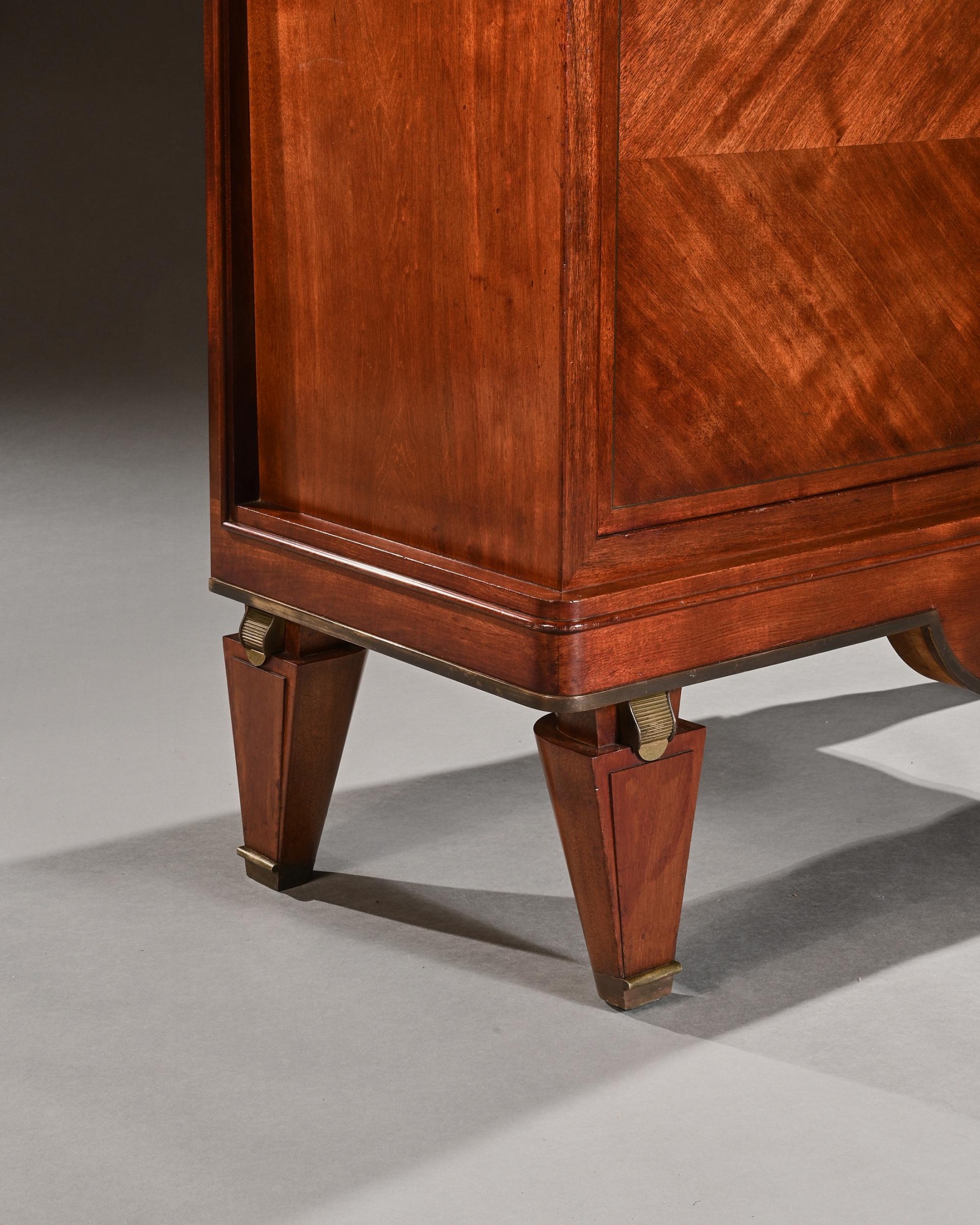 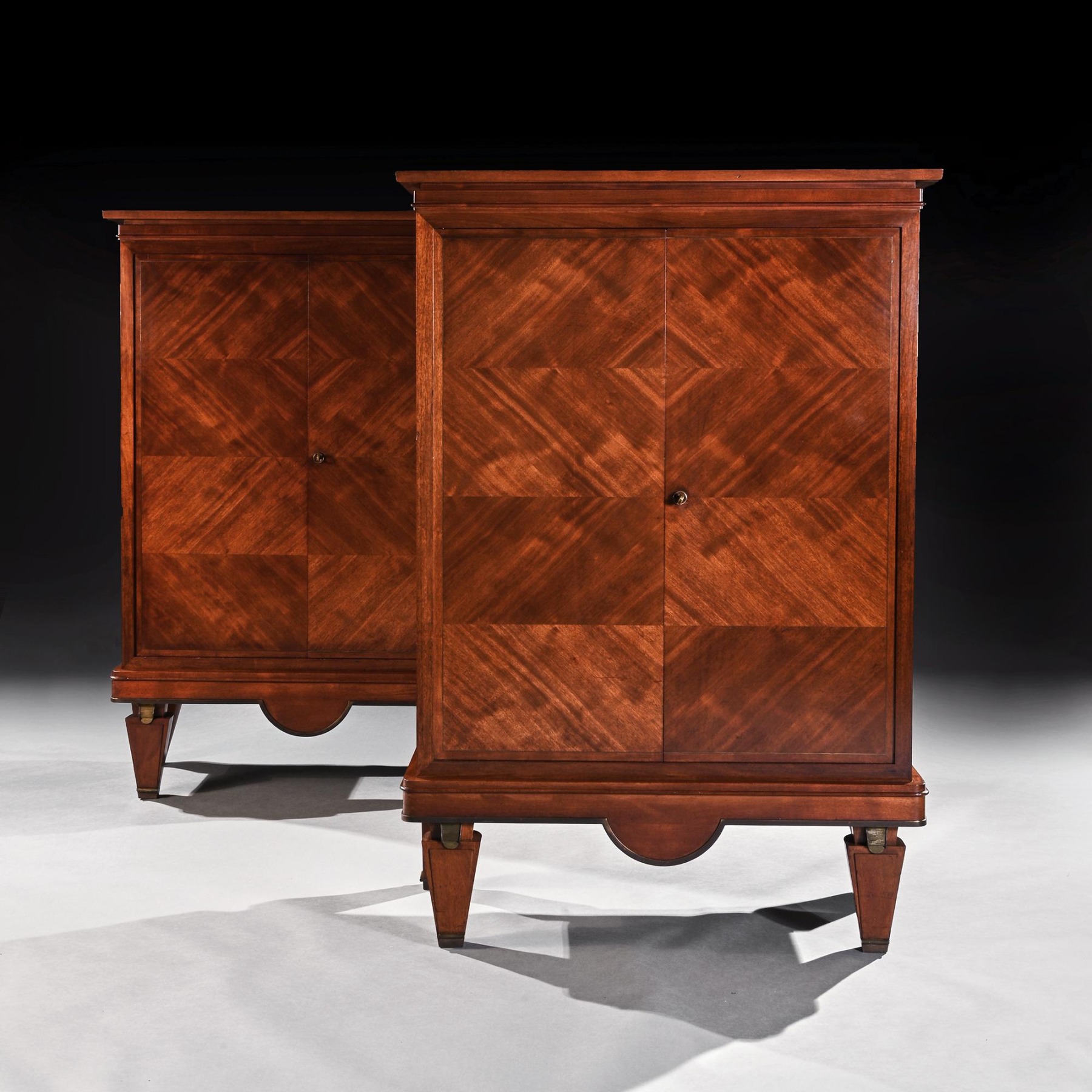 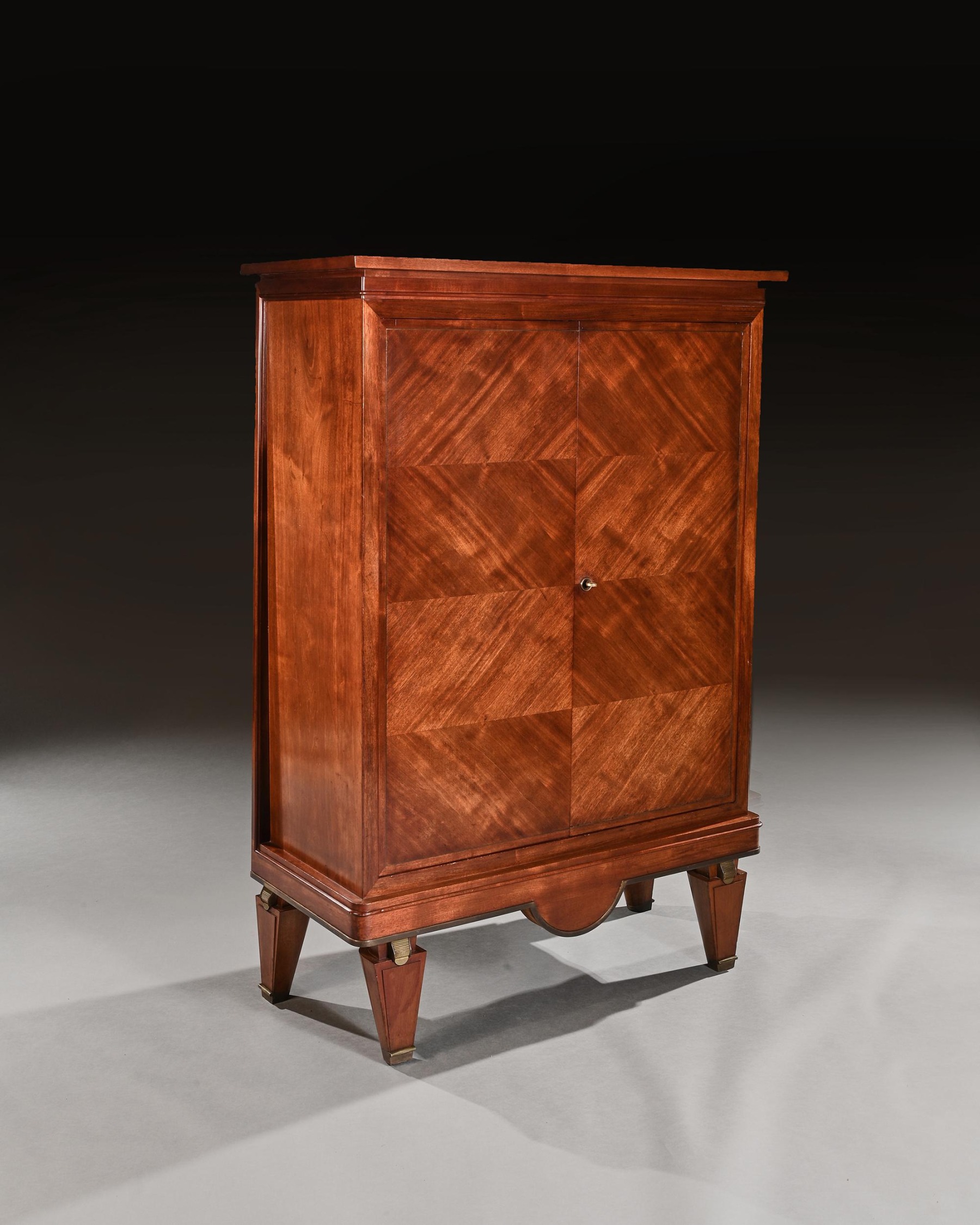 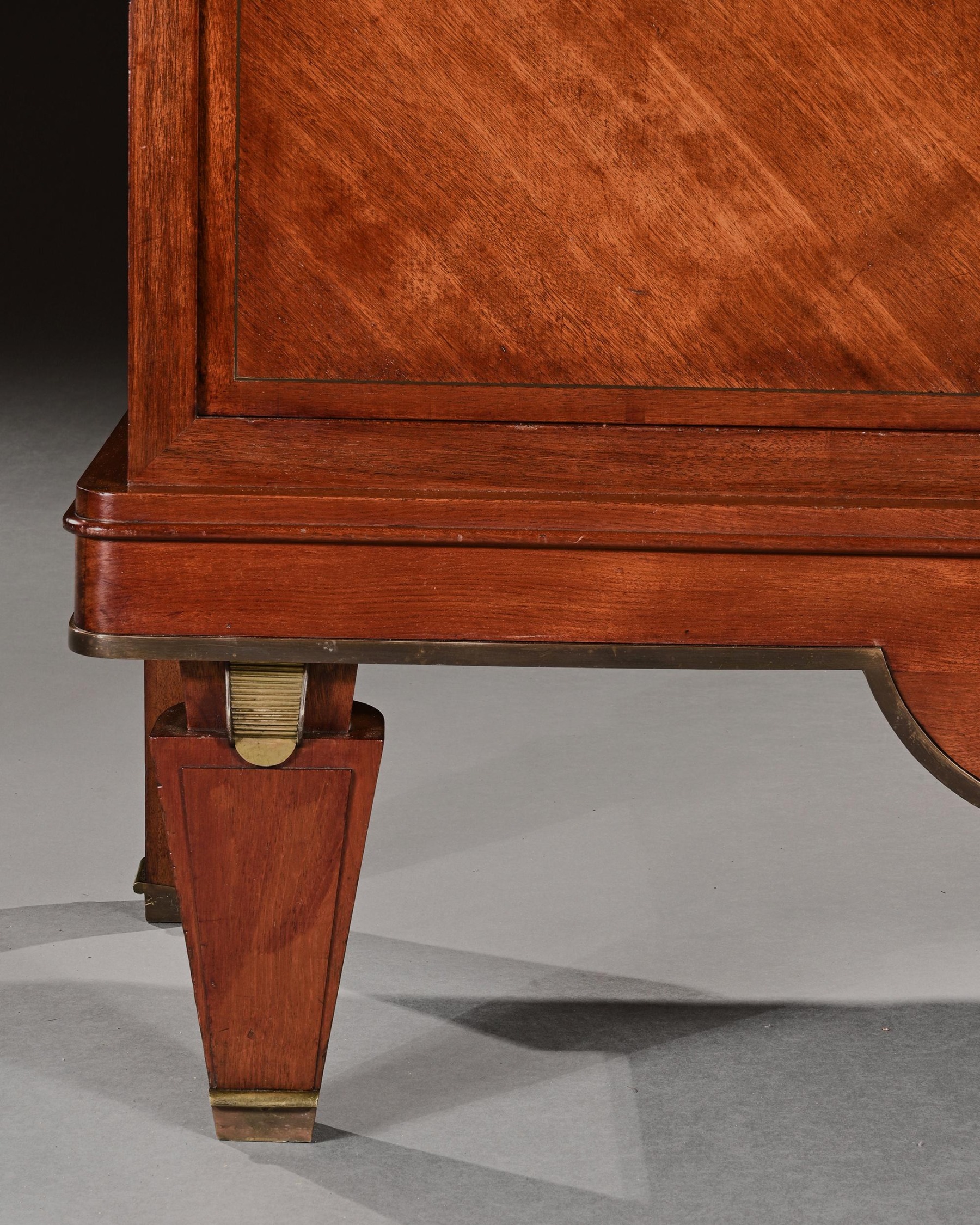 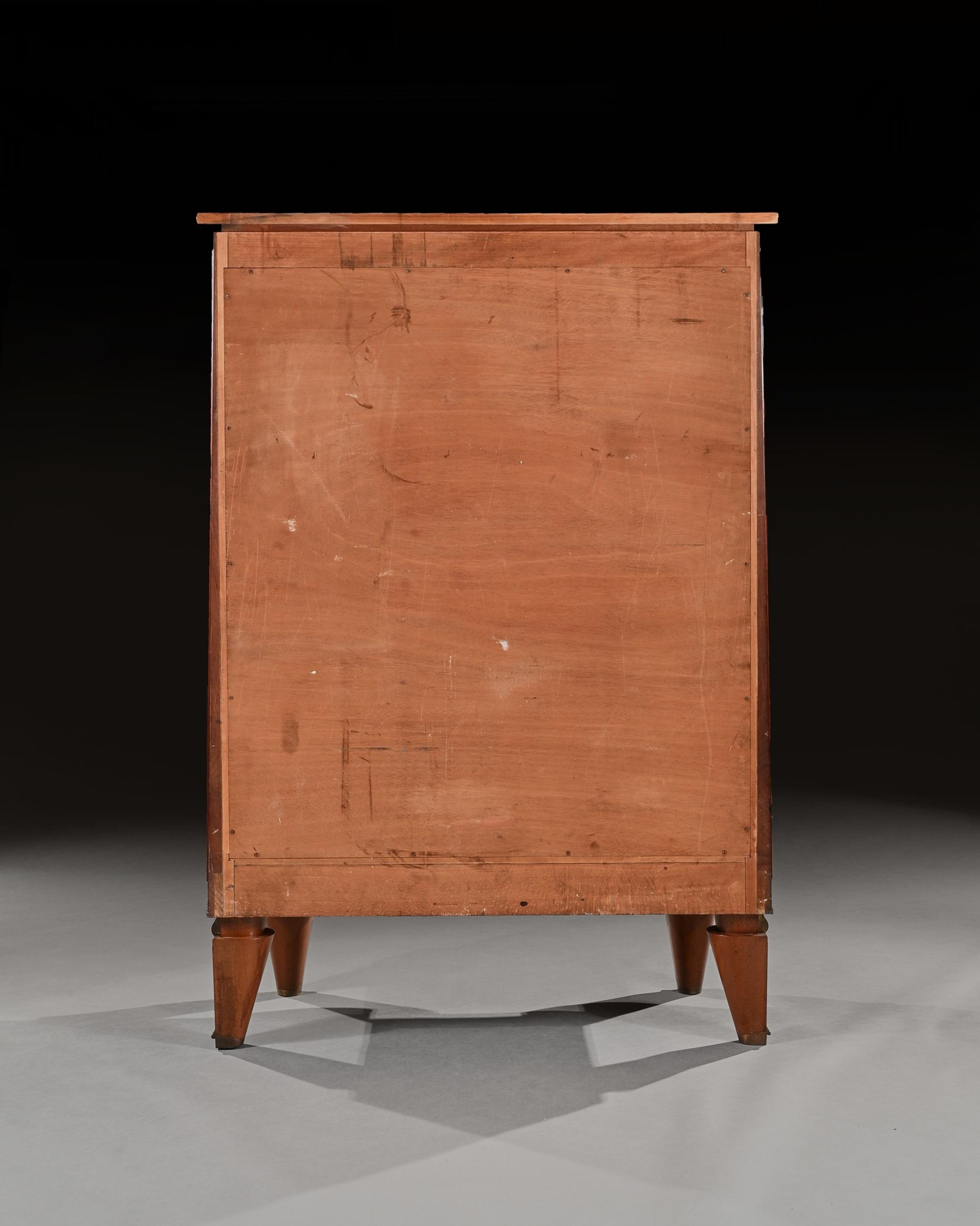 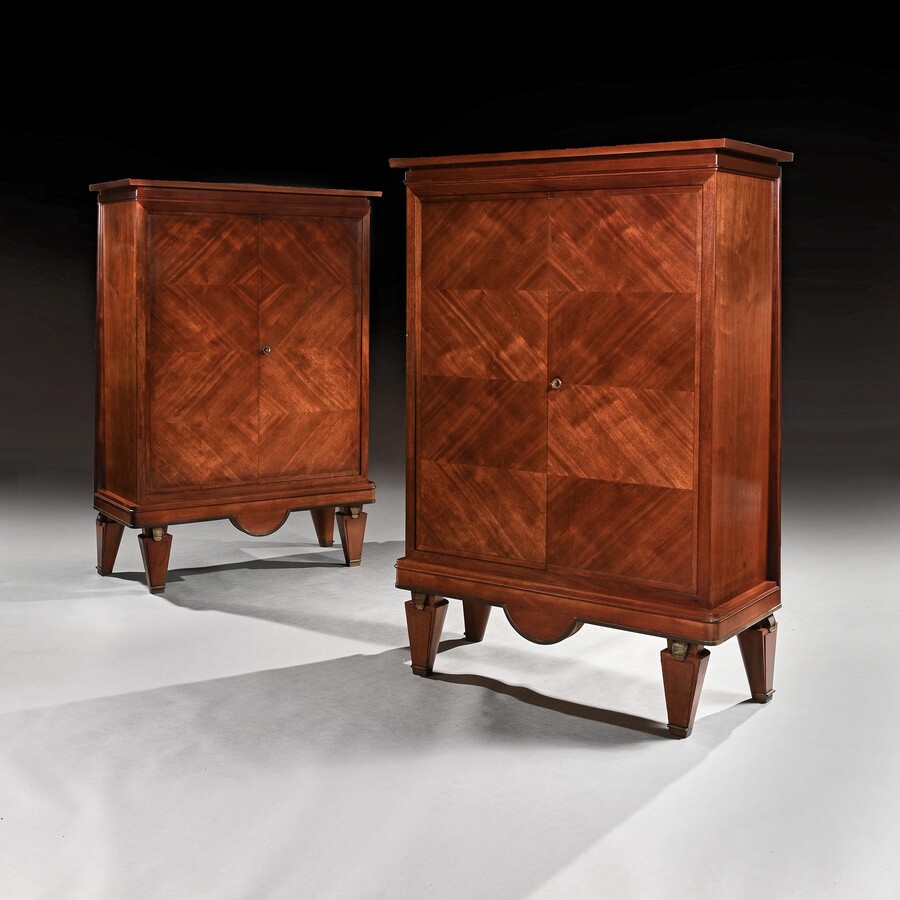 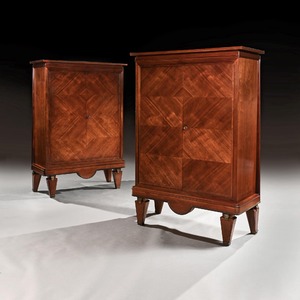 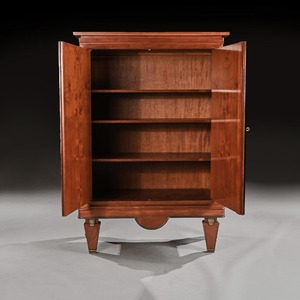 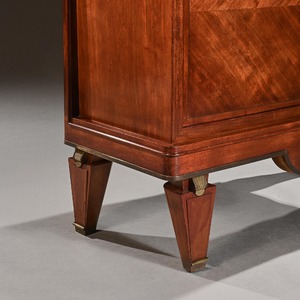 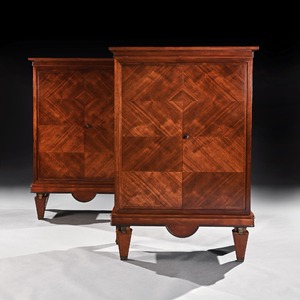 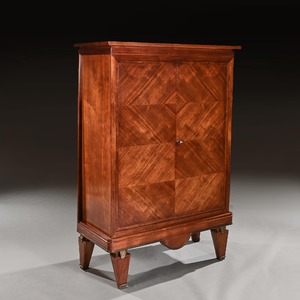 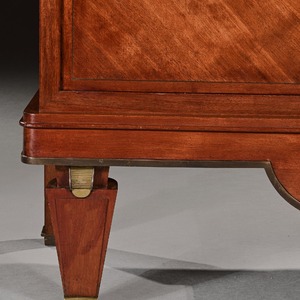 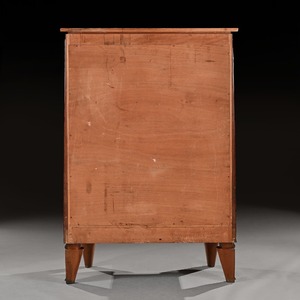 A rare and impressive pair of 1940’s French mahogany and brass mounted Architectural twin door cabinets in the manner of Andre Arbus.

Each cabinet having boarded tops, above a pair of crossbanded doors with rectangular segmented and matched veneers, with inlaid brass stringing. Each right hand door having a raised mould to the edge with conforming mirrored groove to the left door enabling the doors to close securely flush when locked. When opened each cabinet reveals an interior storage space with three later adjustable shelves. Raised on a shaped and moulded apron with a brass clad moulding and tapering legs, the knopped surmounts with clasp shaped reeded mounts and terminating on brass feet.

These cabinets would have most defiantly been commission made as are seemingly a one off. Of superior quality and design the cabinets share many elements found in the work of Andre Arbus.

With research it is has not been possible to find a close matching comparative but examples are rare to the market and rarer still in a pair. Without provenance it is hard to include a firm attribution to Arbus but the many design details and superior all quality point to Andre Arbus’s work, possibly a collaboration with a fellow maker….research continues.

As noted above it is extremely rare to find a pair of cabinets of this design and quality.

André Arbus was a decorator, furniture designer, architect and sculptor. Born in 1903 in Toulouse, France, he went on to work in his father’s cabinet-making firm after graduating from the prestigious Ecole des Beaux Arts.

While Arbus was not himself a cabinet maker, he was interested in form and in good design. He believed in designing furniture that was comfortable and a perfect fit for the human form. His work changed the direction of his father’s firm, as André designed furniture that was in opposition to the firm’s preferred style, which was very traditional and derivative of 18th century France. André’s furniture was inspired by the Classicism of the French Empire, but his pieces are of much stronger and more dramatic proportions. Like many of his contemporaries, he also favoured luxurious materials, such as fine and rare wood veneers, lacquer, parchment, and vellum.

André showed his work for the first time at the 1926 Paris Salons, and shortly after, was asked by the Parisian gallery L’Epoque to exhibit his work with them. In 1932, Arbus left Toulouse for Paris. The opening of his own gallery, in 1935, was a major milestone in the designer’s career. The gallery, located on the prestigious Avenue Matignon, drew many wealthy and influential people who soon became his faithful clients. They admired his luxurious and distinctive but under-stated designs. During this time, he also collaborated with numerous artists. Perhaps the most important was the Russian immigré Vadim Androussov (1895-1975), a gifted sculptpr, whose sculpted decoration in wood, gesso, and bronze added drama and elegance to Arbus’s already beautiful designs. These collaborations would lead to the creation of furniture which was elevated to the status of art.

Arbus made a name for himself during the late1930’s and through the 1940’s, decades that provided us with some of the most impressive talents in the French decorative arts, such as Leleu, Adnet, Poillerat, and Dupre-Lafon, to name just a few. Félix Marcilhac, a well-known expert in Paris in the field of early 20th century decorative arts, referred to Arbus as "one of the most inventive interior designers of the period." This period is defined by a renewed interest in the Neo- classical style seen through the eyes of modern masters, of whom Arbus was the leader. The fondness for French Neo-Classical design during the war is not surprising - people wanted something fresh, but also something comforting and familiar.

Throughout his illustrious career, Arbus won numerous awards. One of his first awards was the Premier Prix Blumenthal in 1934. This was a very prestigious prize, named after Florence Meyer Blumenthal (through the Franco-American Florence Blumenthal Foundation), which awarded young French artists with a monetary stipend. Other artists who received this award were Edouard Vuillard, Aristide Maillol, Paul Signac, and Auguste Perret. This was an important honour for a young artist in the beginning of his career.

Like his colleagues, Arbus lent a hand to the decors of luxury ocean liners. Both the Jean-Laborder and the Provence, cruise ships, were outfitted with his furniture. Amongst his commissions, there is one in particular that deserves special notice. In 1950, he built a jewel cabinet for the then Princess Elizabeth of England. One of his last projects was for the Chapelle Saint-Augustin d’Eguilles, a chapel in Provence completed in in1964.

André Arbus participated in the 1939 World’s Fair in the US, designing the French sections at the Expo in New York and in San Francisco. A recipient of numerous industry awards, he was also chosen as the head of the École Nationale Supérieure des Arts Décoratifs in 1951. Many of his pieces were chosen by the French government to be in the Mobilier National. The designer remained active until his death in 1969.