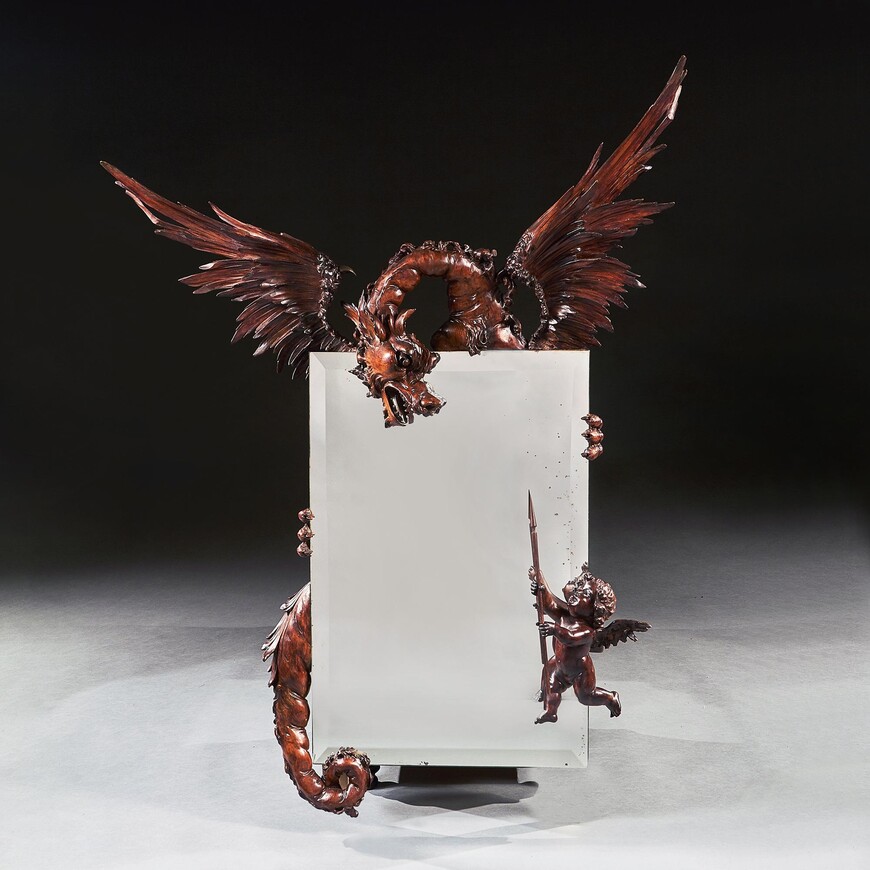 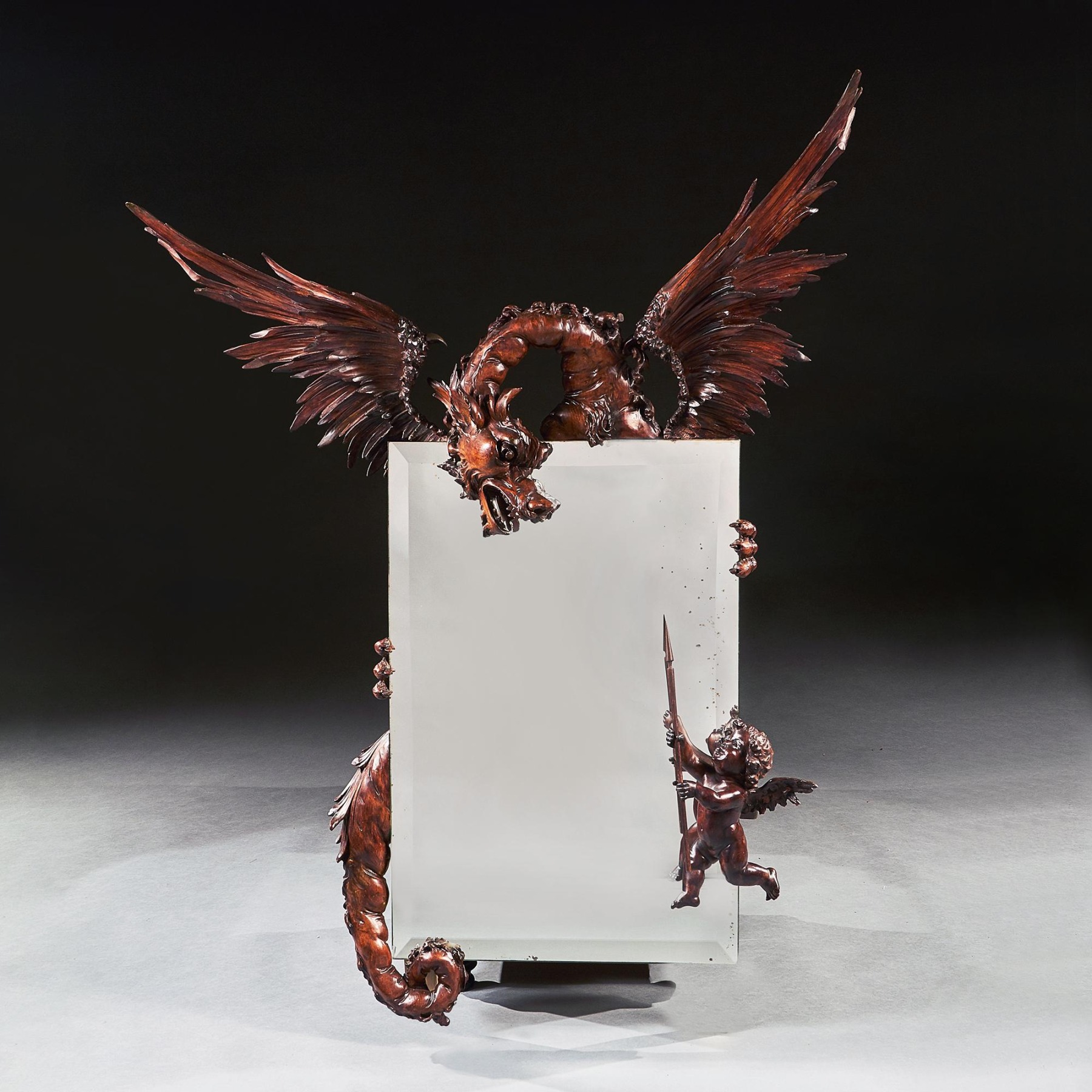 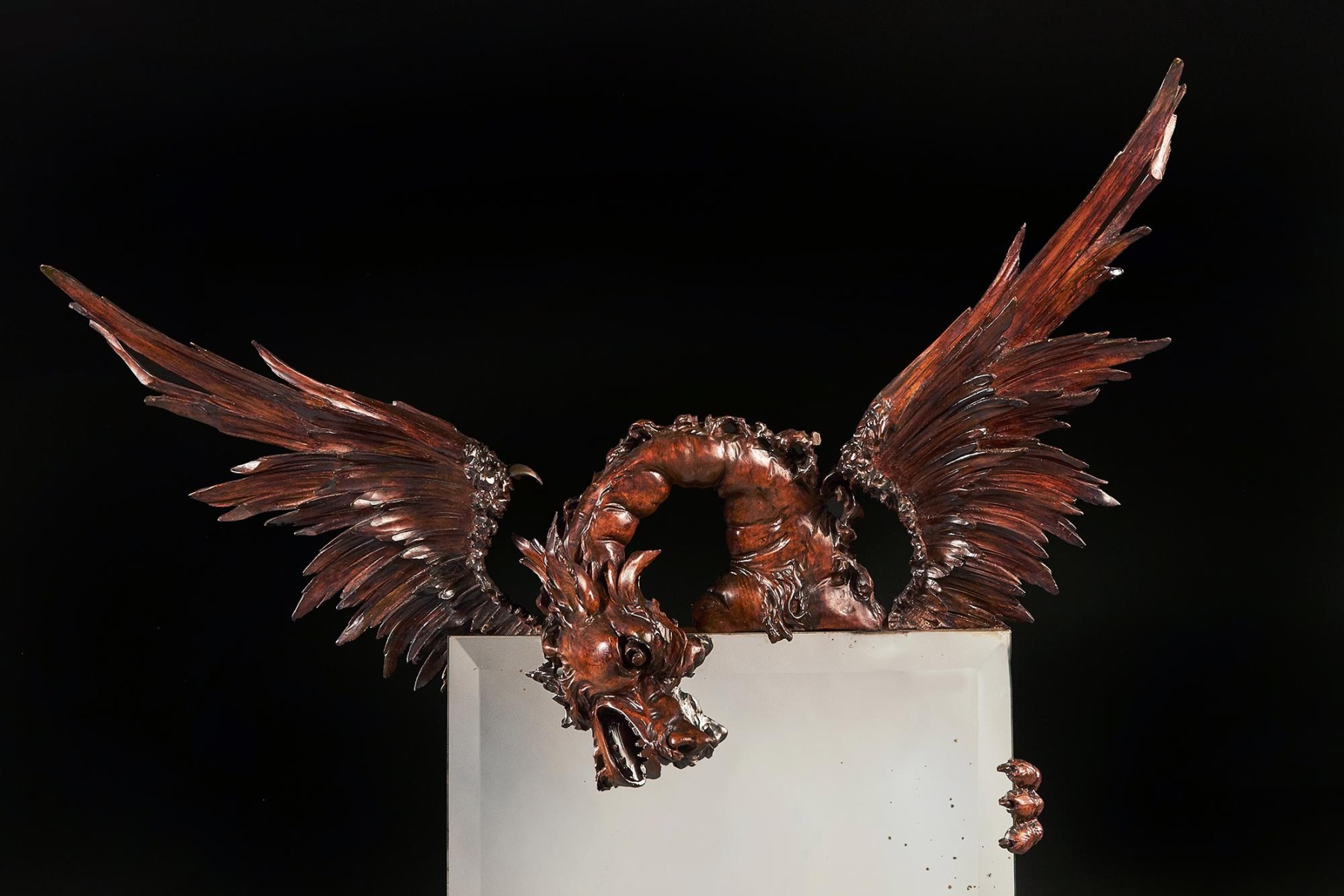 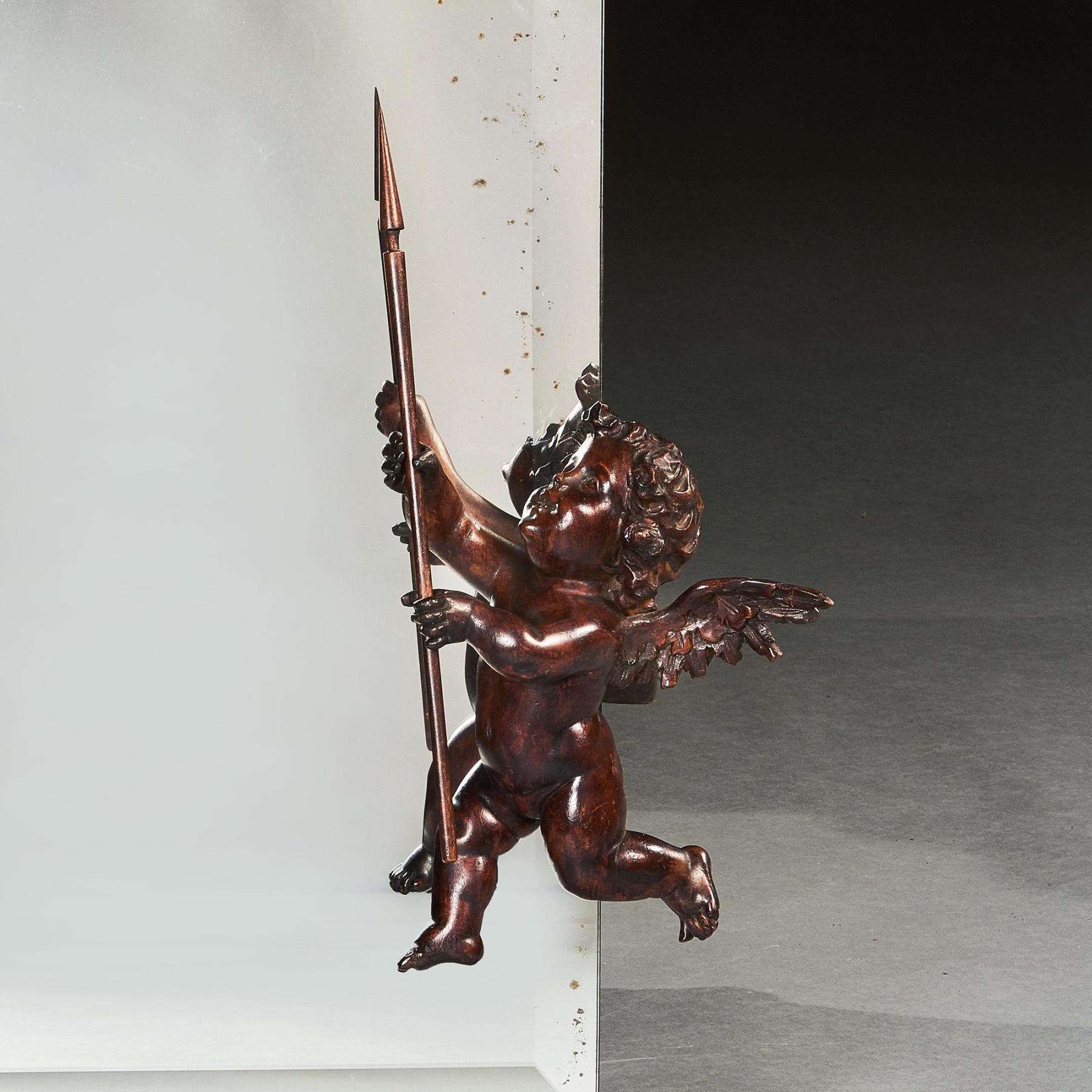 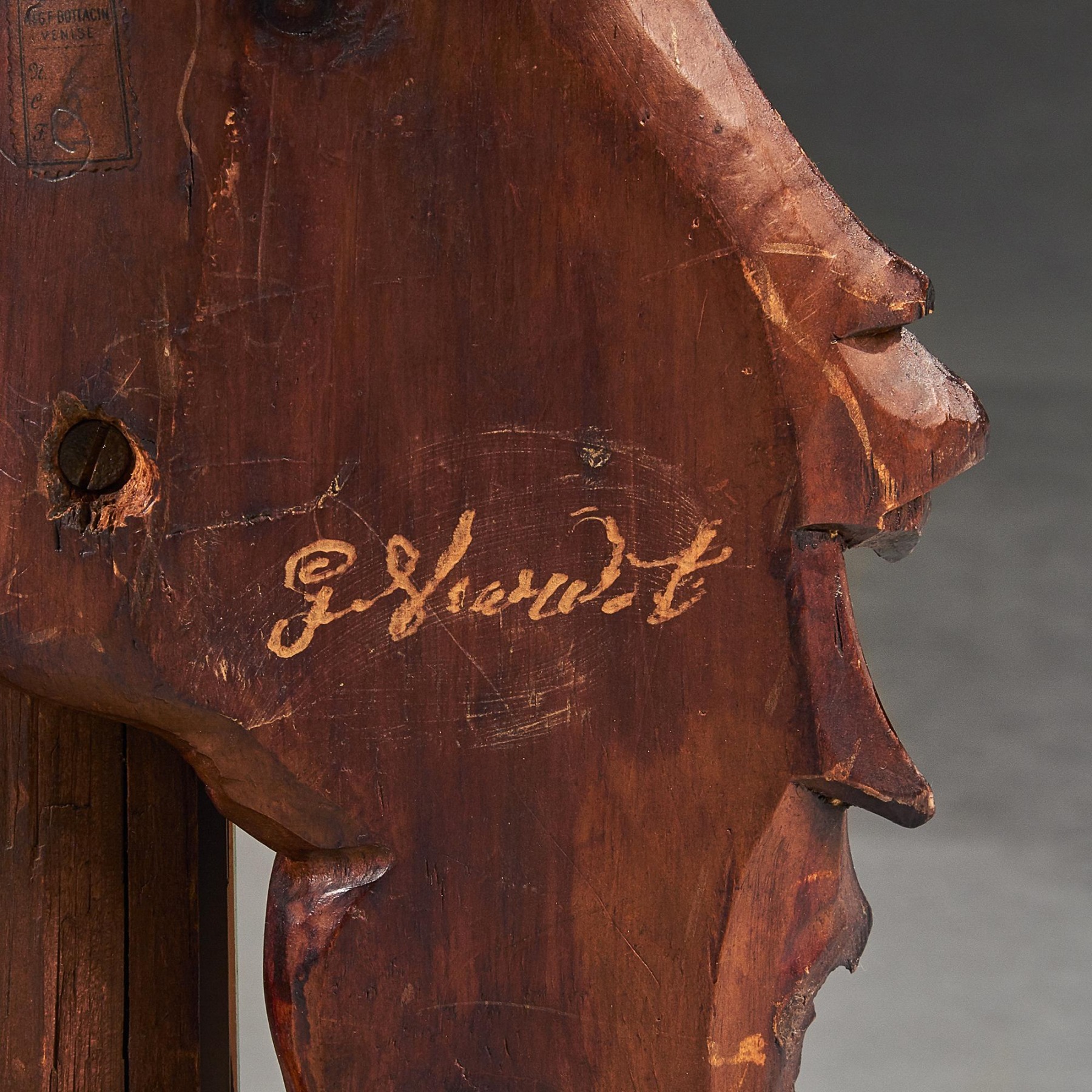 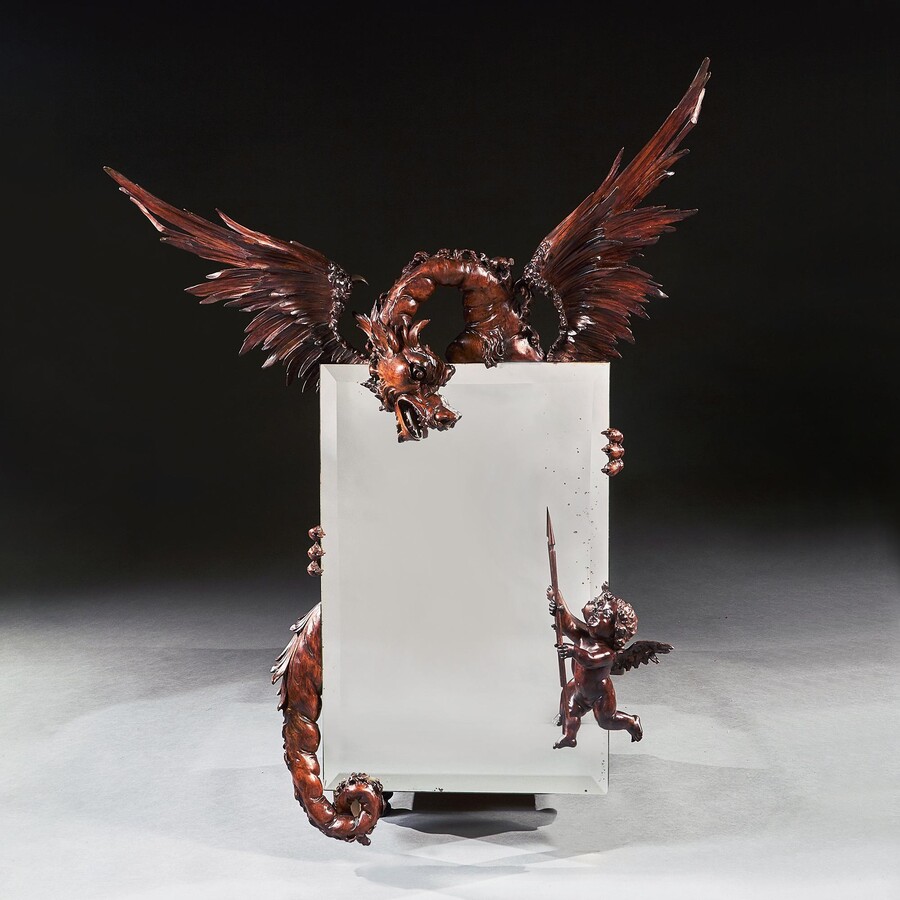 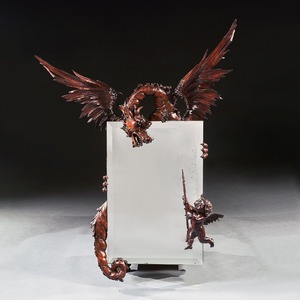 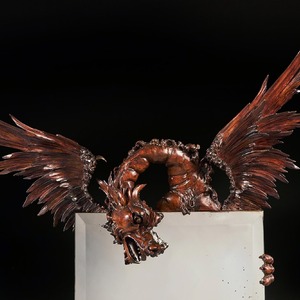 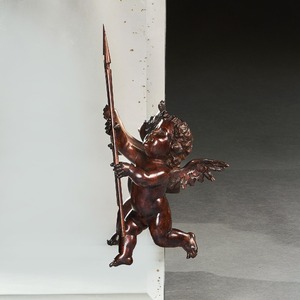 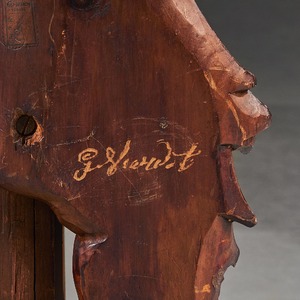 In excellent original condition having a warm natural colour, the original glass plate having a small amount of tarnishing which can be seen in the image against a grey background but not noticeable or prominent when in situ.

This mirror by Gabriel Viardot is signed to the verso and has to be one of the best examples I have seen along with the imposing scale and carving on this piece being exceptional. The signature to the verso is definitely in Viardot style but hard to authenticate and could possibly be later.

What looks to be old inventory label is also visible to the rear showing this was possibly hung in a Hotel in Venice, Hotel Bottacin Venise.

Japonisme is a French term coined in the late nineteenth century to describe the craze for Japanese art and design in the West, Gabriel Viardot was at the forefront of this movement.

Gabriel Viardot career began as a wood carver and succeeded his fathers business in 1861.

He produced small furniture with sculpturally carved naturalistic motifs and animals which where well received in the 1855 Exposition Universelle in Paris. Soon however the increasing importation of similar pieces produced by the Swiss and German found less demand for his goods.

Being an innovator Viardot decided to change his fathers business model and in around 1870 turned to producing “Meubles genre Chinois et Japonais” - Furniture of Chinese and Japanese Style.

Now Chinese style had been widely in vogue in Europe for several centuries, but Viardot looked even farther East—to Japan, to be precise. After its forced opening, the archipelago poured shiploads of creations into the West which developed a passion for them.

The Universal Exhibitions of the second half of the 19th century played their part as well. The term was even invented and took root: Japonism. Many were the collectors, writers, dandies, critics and artists who adopted it with delight with Vairdot being the Leader of this movement.

Success crowned every appearance, and in 1887, the Revue des Arts Décoratifs praised his work as follows: "Mr. G. Viardot, having swept up every possible award, continues to elicit acclaim. The pieces he exhibits are of a finish and craftsmanship that readily account for their widespread success." And now he is coming to seek a triumph at auction. And surely the carved dragon he summoned—a mythical being of good omen in Asia—will bring him yet another victory.