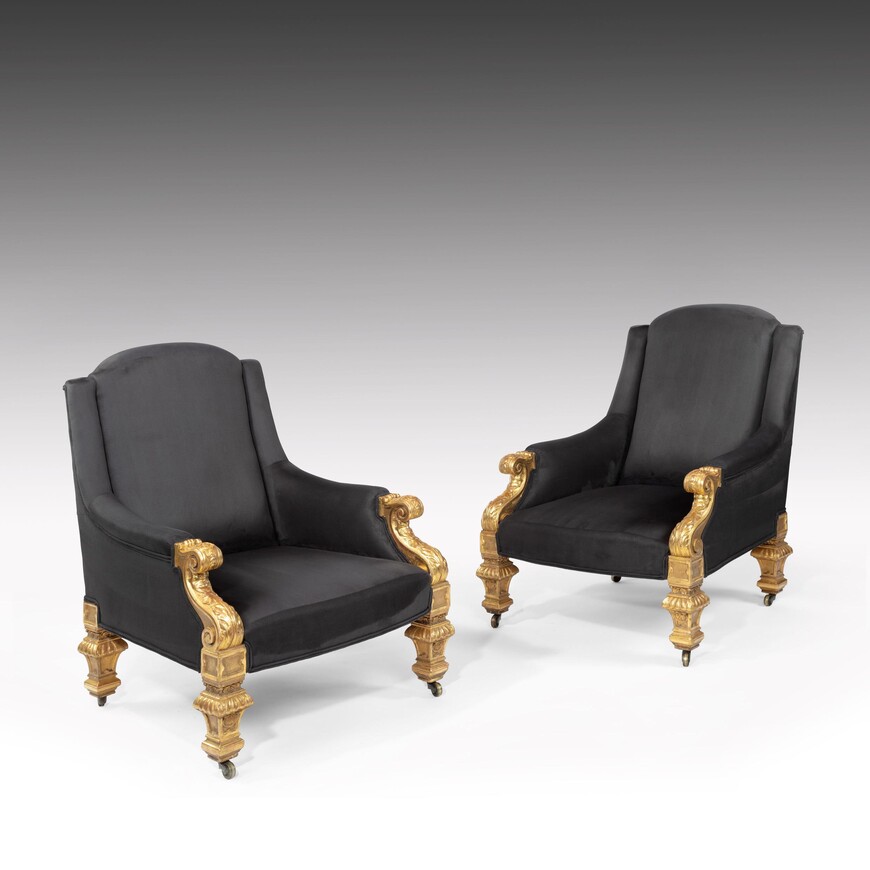 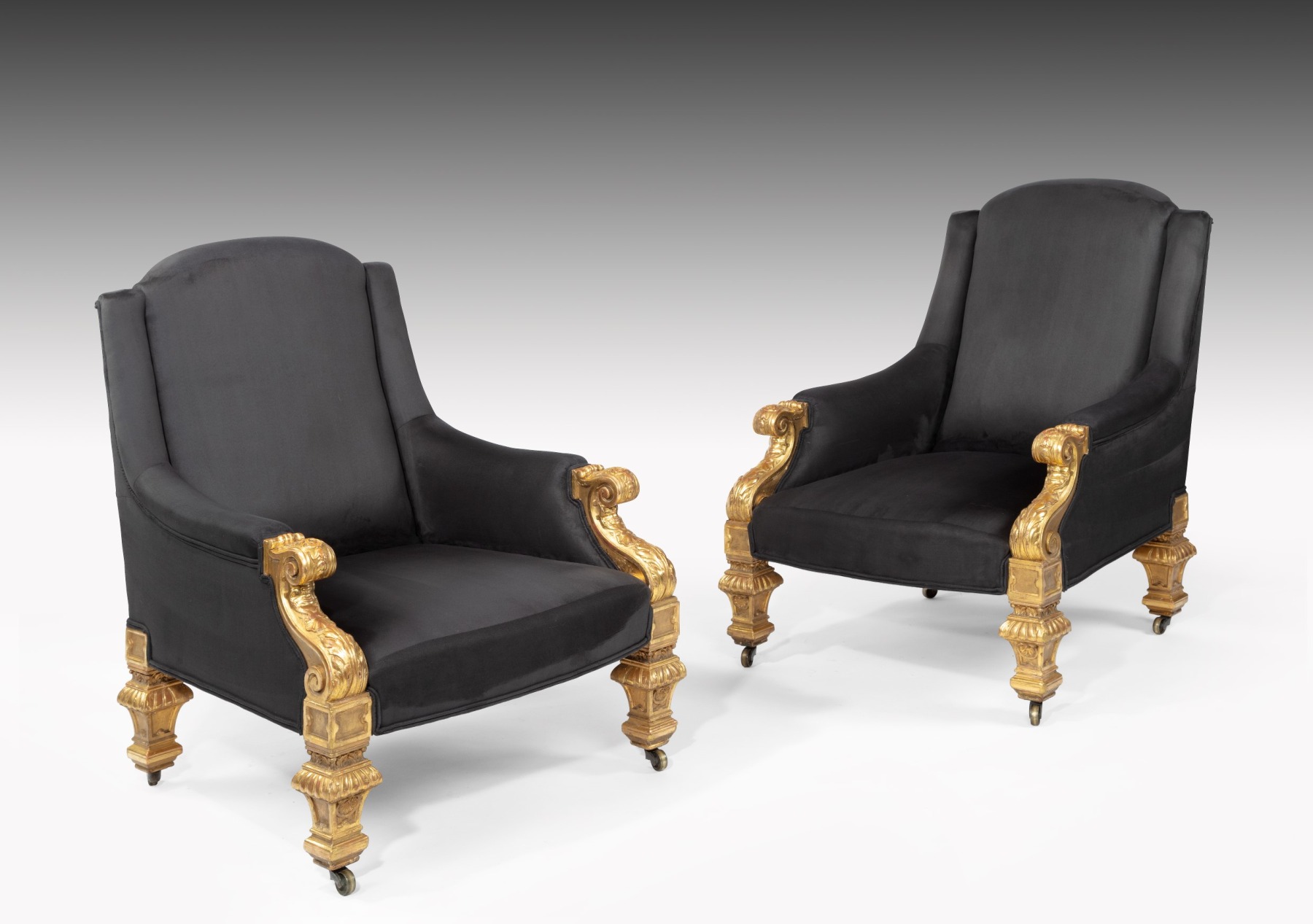 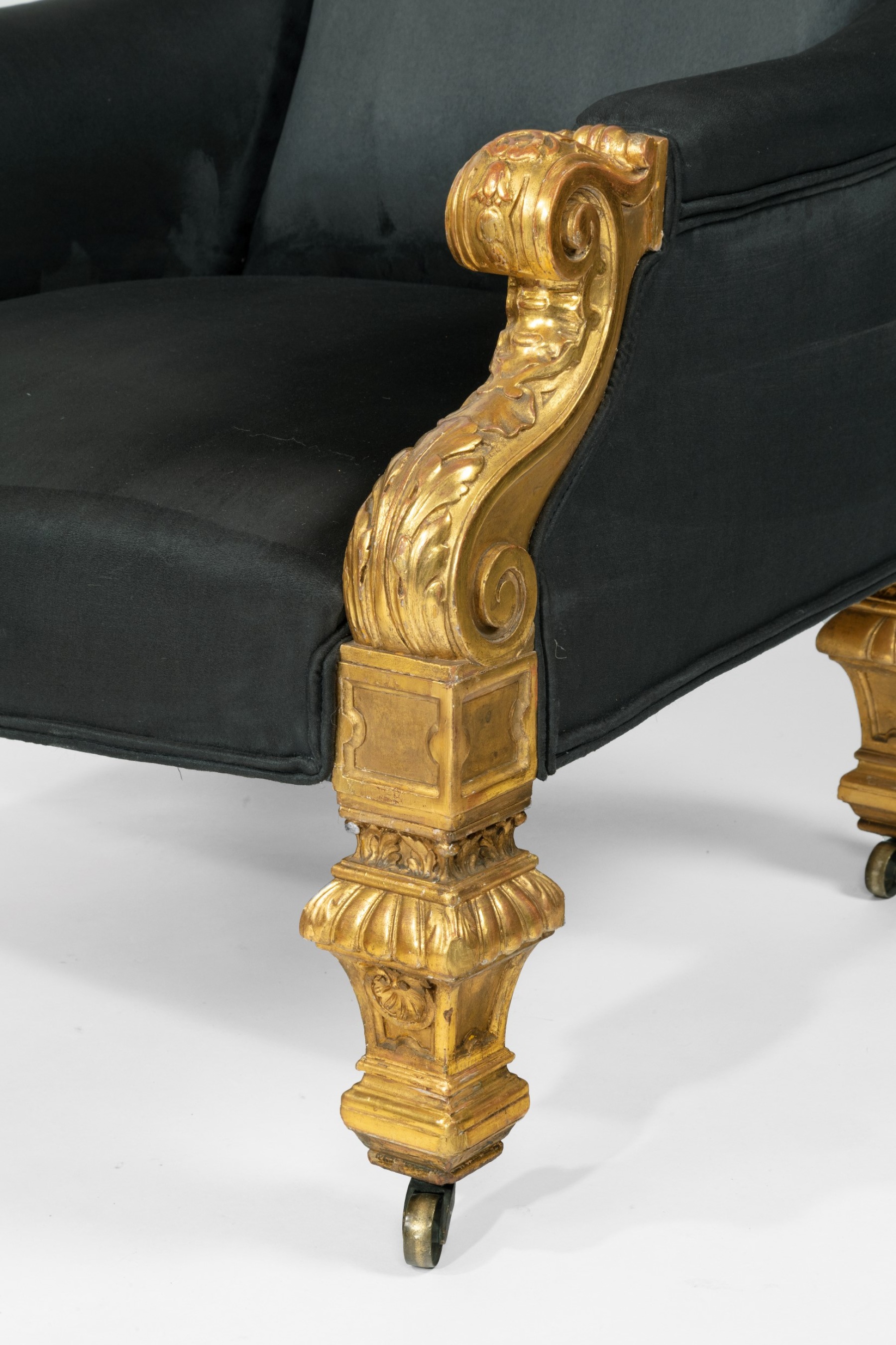 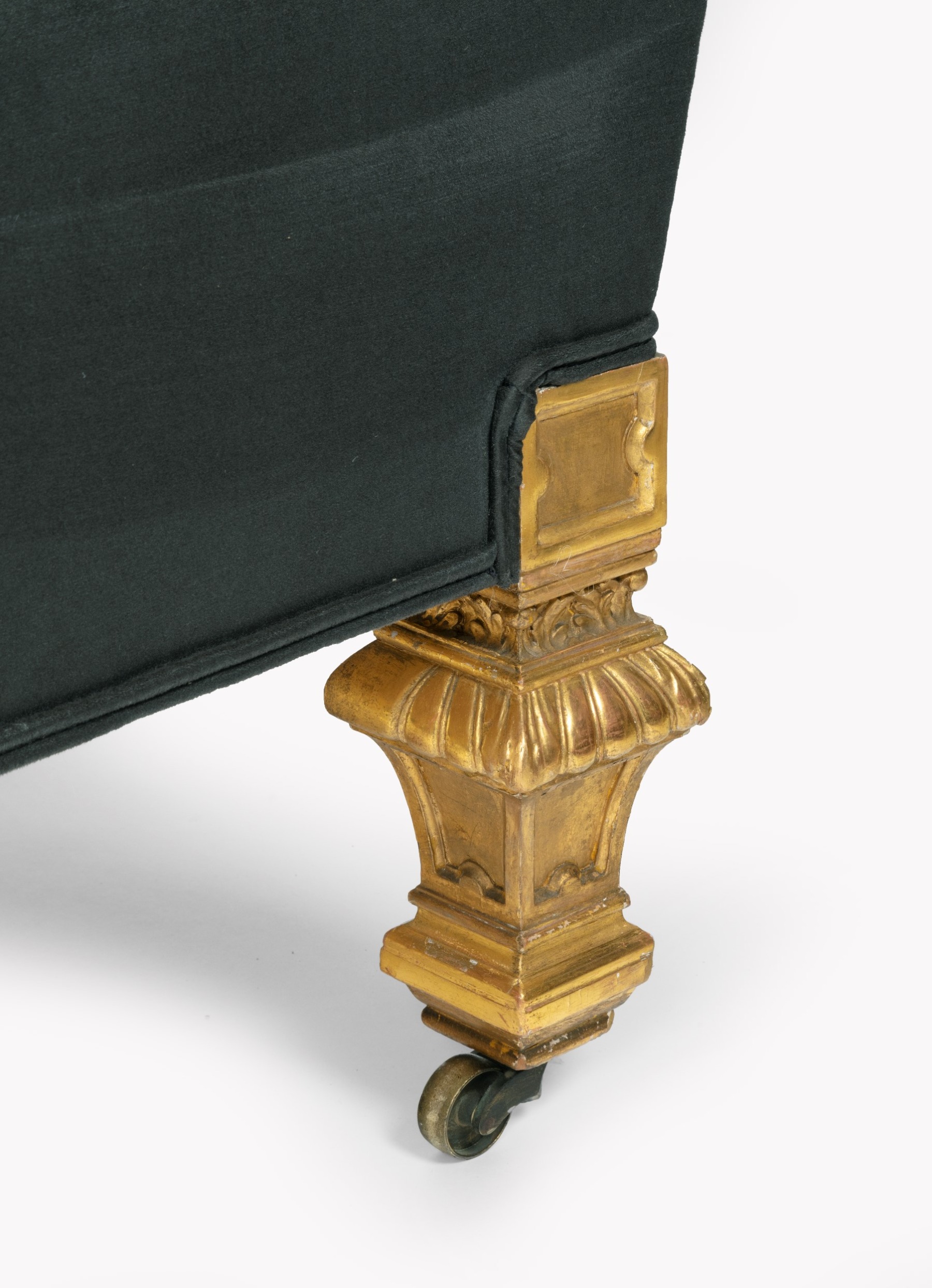 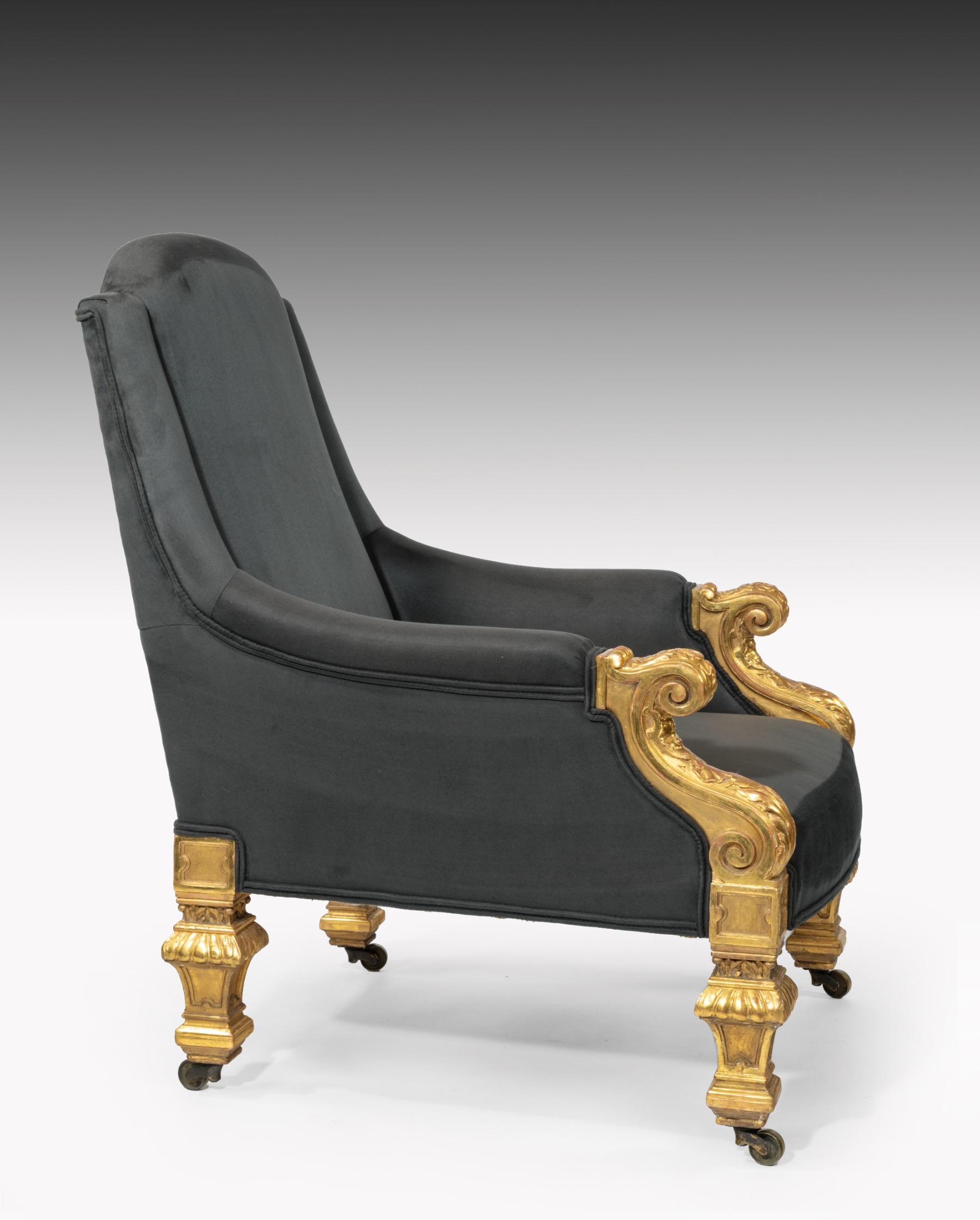 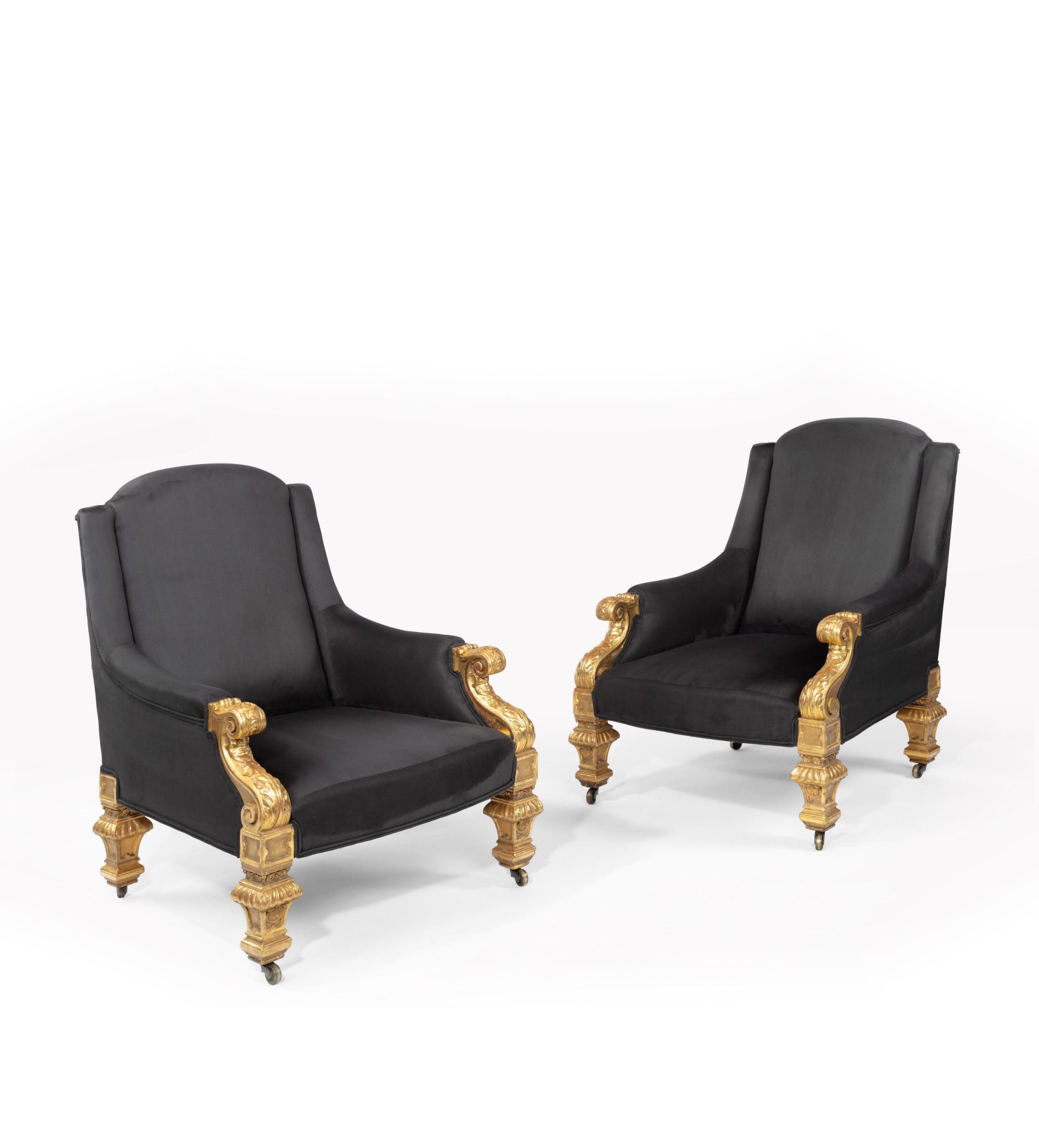 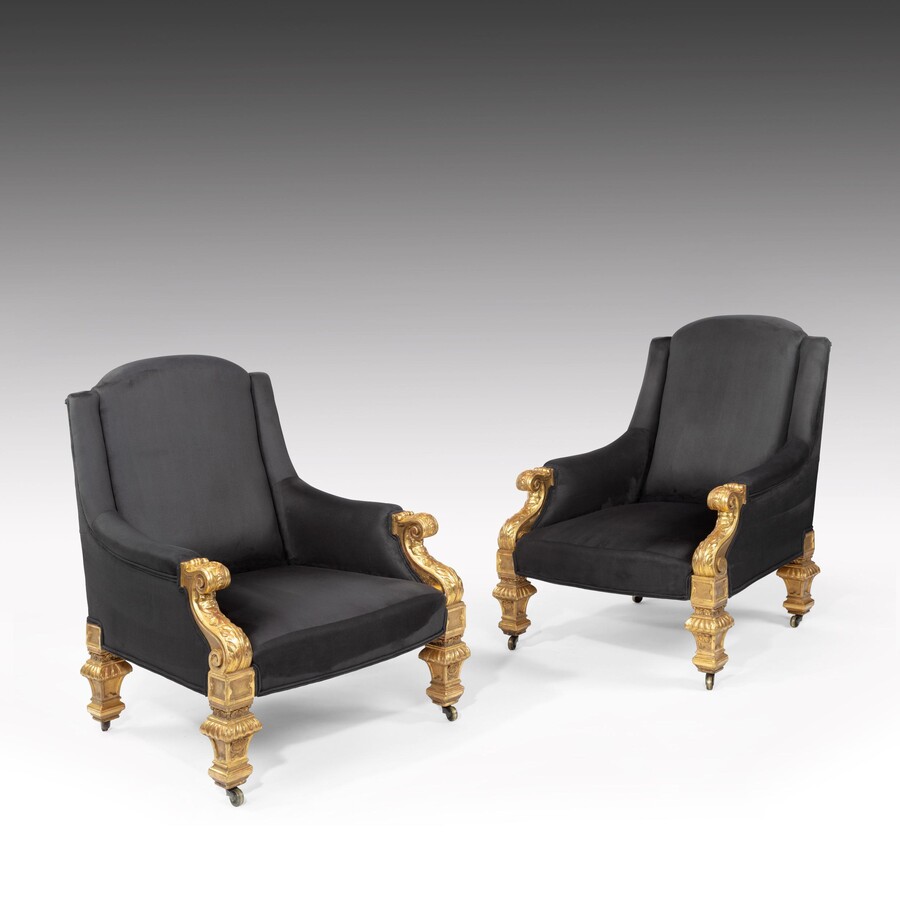 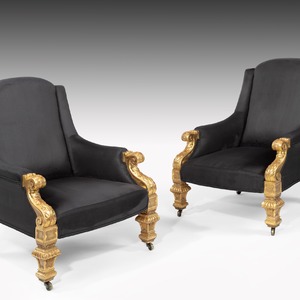 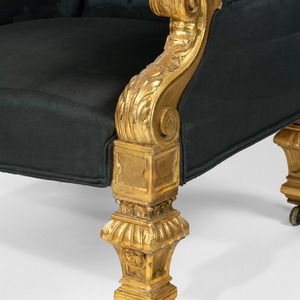 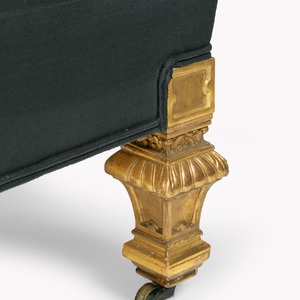 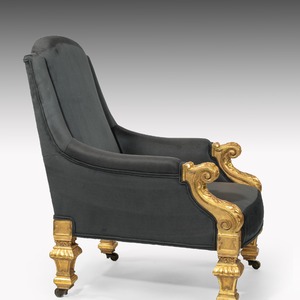 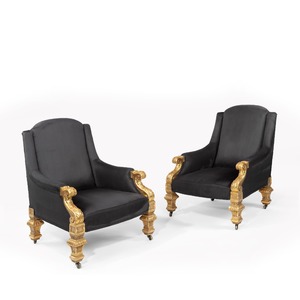 A Pair of Holland and Sons 19th Century Giltwood Armchairs #2651

The arched rectangular shaped back above a sprung seat and rising padded armrests, each having carved scrolled terminals to the front with strapwork and acanthus leaf decoration finishing on lappet terminals. Supported by four recessed panelled square sections above a foliate carved and guilloche decorated square tapering legs, terminating on the original brass castors.

Offered in excellent condition and retaining what we believe is their original gesso and giltwork, these chairs have been newly recovered in a black/slate nubuck fabric.

We strongly believe these chairs to have been made by the famous Royal cabinet makers Holland & Sons.

There are stylistic affinities with examples designed by the Victorian artist and sculptor Alfred Stevens (1817-1875). He produced a suite which was manufactured by the royal furniture-makers Holland & Sons for the Dining Room at Dorchester House in London, one of the grandest and most lavishly furnished houses of mid-19th century London, commissioned by the great Victorian patron of the arts, Robert Staynor Holford.

Recently a set of 8 dining chairs sold at Sothebys London 23 May 2017, lot 322 of very similar form attributed to Holland & Sons.

These are a superb pair of rare and decorative giltwood chairs of very elegant design by a one of the leading cabinet makers of the 19th Century, making these desirable to any interior designer, collectors or private individual with a discerning eye.

Provenance: Part of the collection of late Ronnie Kirkwood and George Dixon.

Holland and Sons were founded in 1803 by Stephen Taprell and William Holland, a relation of the architect Henry Holland, they soon became one of the largest and most successful furniture making companies in the 19th Century.

They worked extensively for the Royal Family, being granted the Royal Warrant early in the reign of Queen Victoria, hence taking a leading part in the decoration and furnishing of Osborne House, Sandringham, Balmoral, Windsor Castle and the apartments of the Prince and Princess of Wales at Marlborough House.

Holland and Sons also worked extensively for the British Government, for whom they executed over three hundred separate commissions, including the Palace of Westminster, the Victoria and Albert Museum, and oversaw the State funeral of the Duke of Wellington. Among their private commissions the firm produced a celebrated suite of bedroom furniture for the late Sir Harold Wernher at Luton Hoo.

Always at the forefront of fashion, Holland & Sons employed some of England’s leading designers and participated in all of the International Exhibitions of 1851, 1855, 1862, 1867, 1872 and 1878. On 22 January 1986, a cabinet by Holland and Sons was sold at Christie's for £81,000, the highest price paid until then for an item of Victorian furniture. The cabinet had originally been exhibited in the Paris Exhibition of 1867 and the designer was Bruce Talbert. Holland and Sons were the first London firm to employ Talbert and the cabinet is regarded as one of Holland's most important works