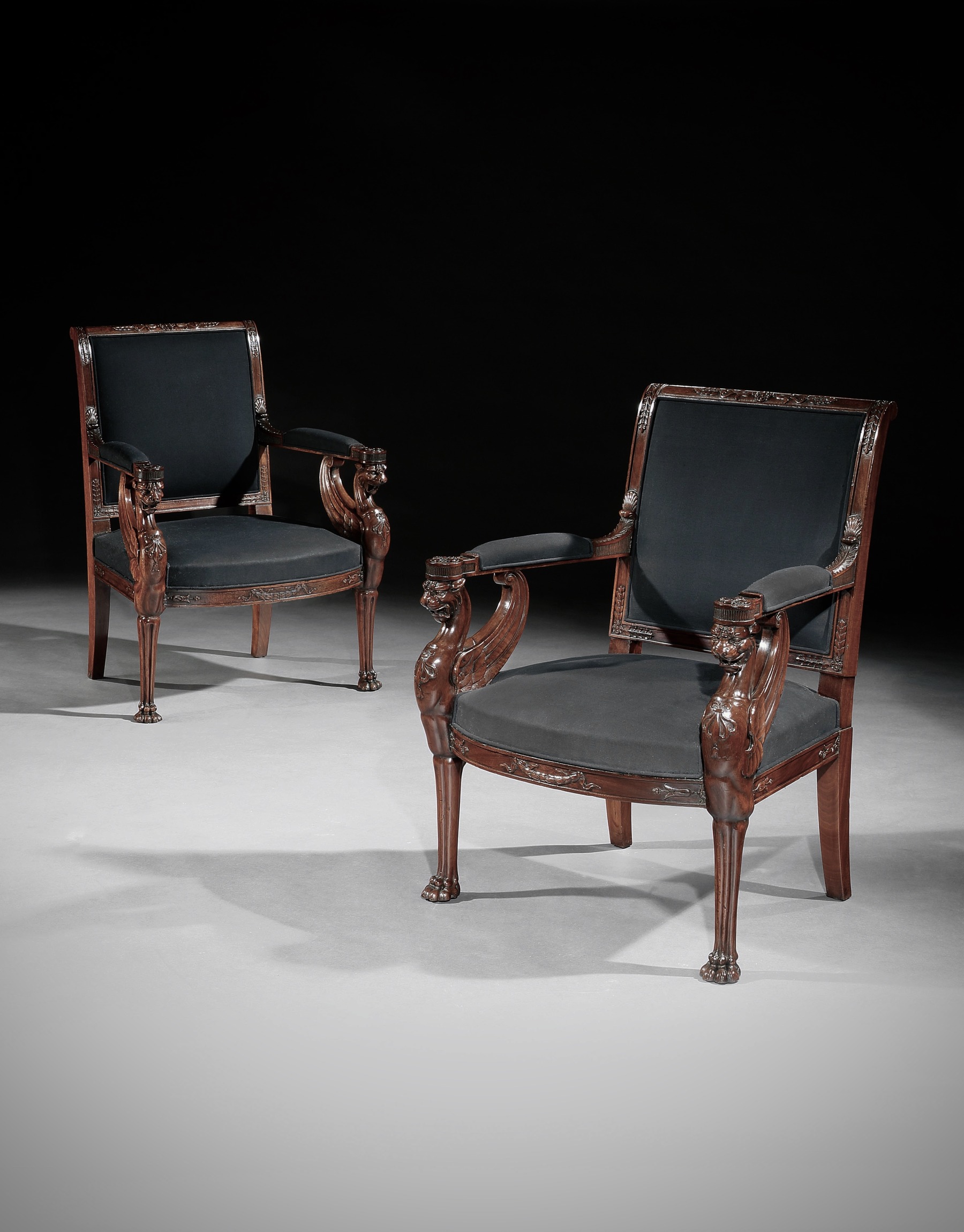 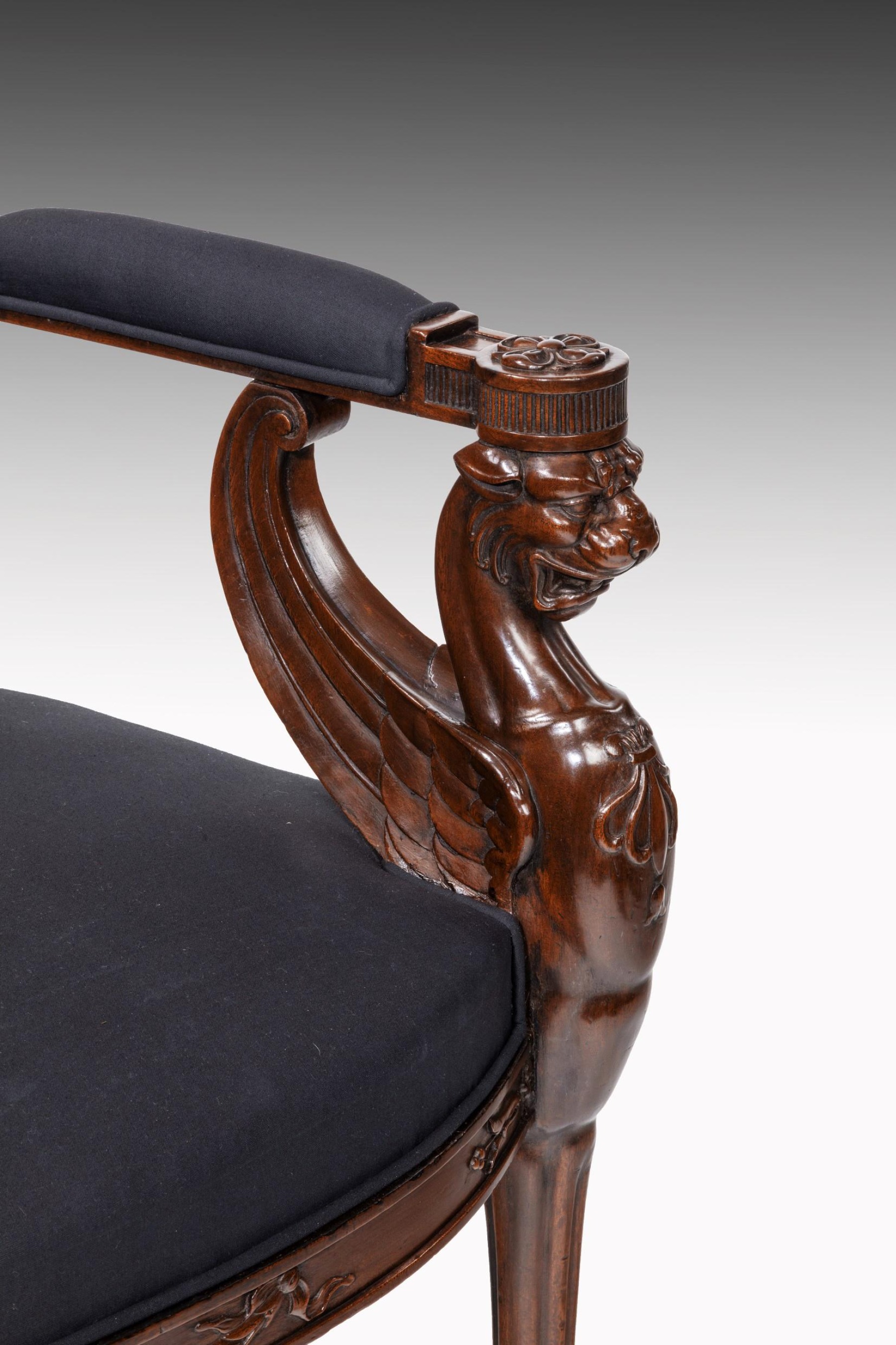 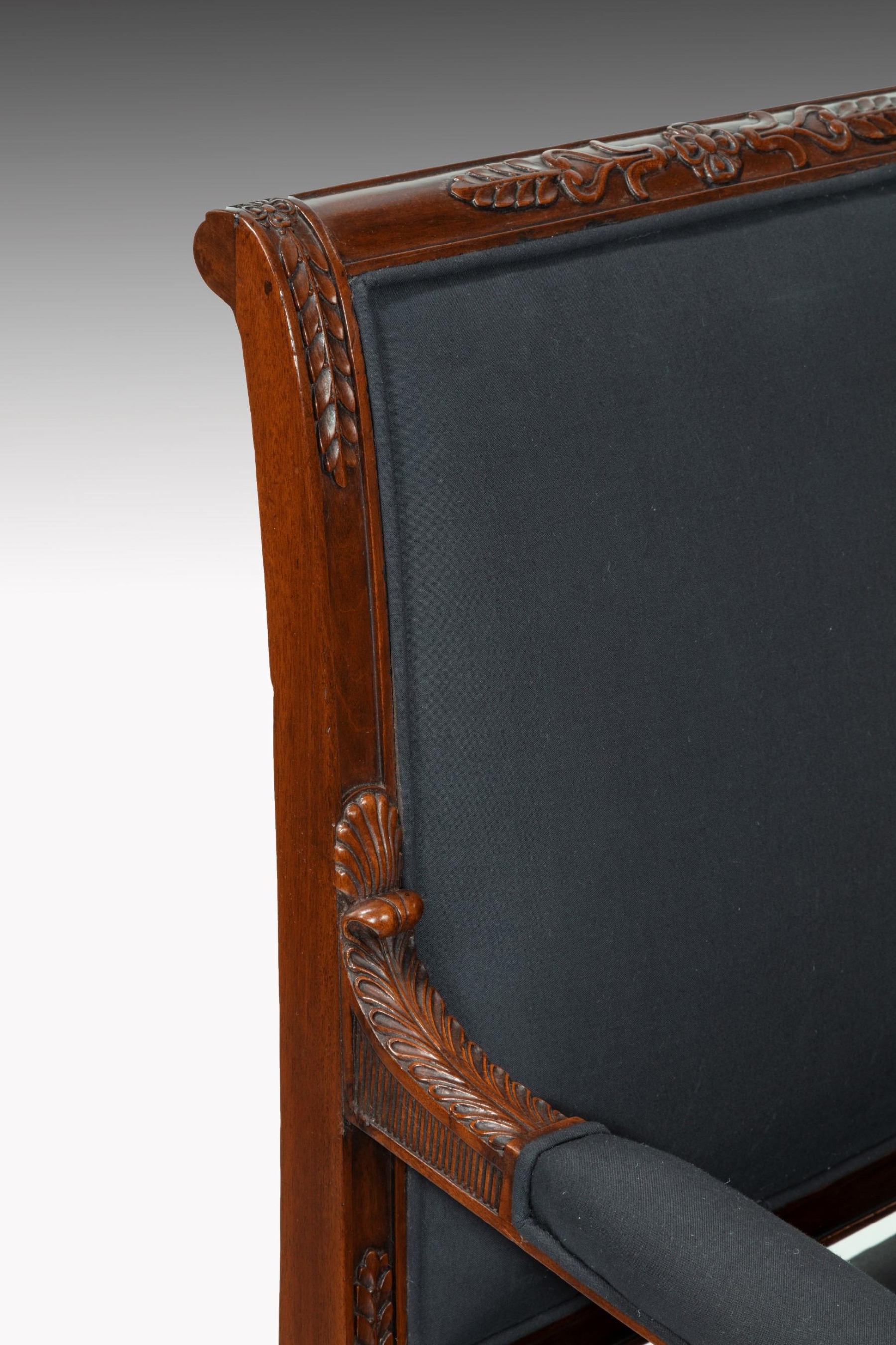 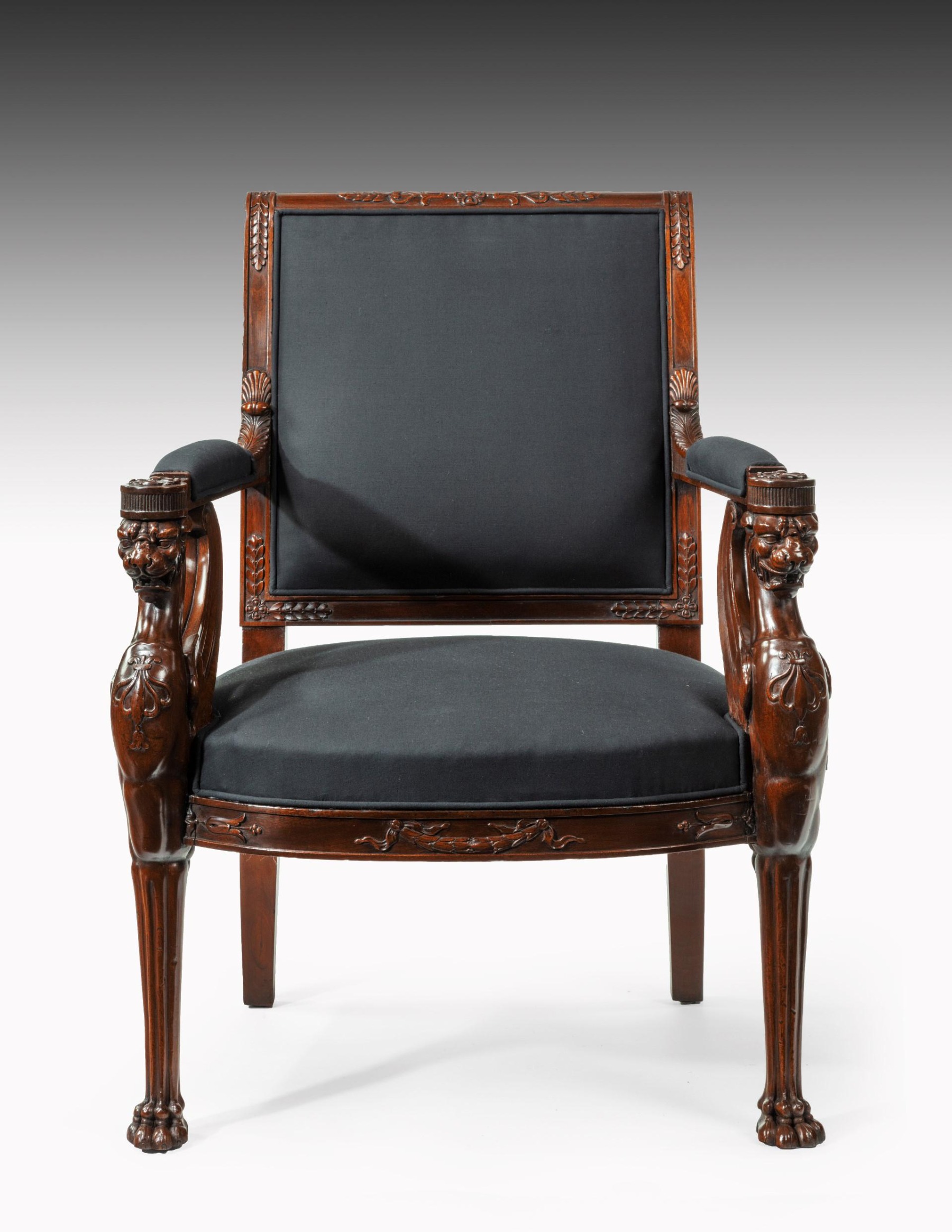 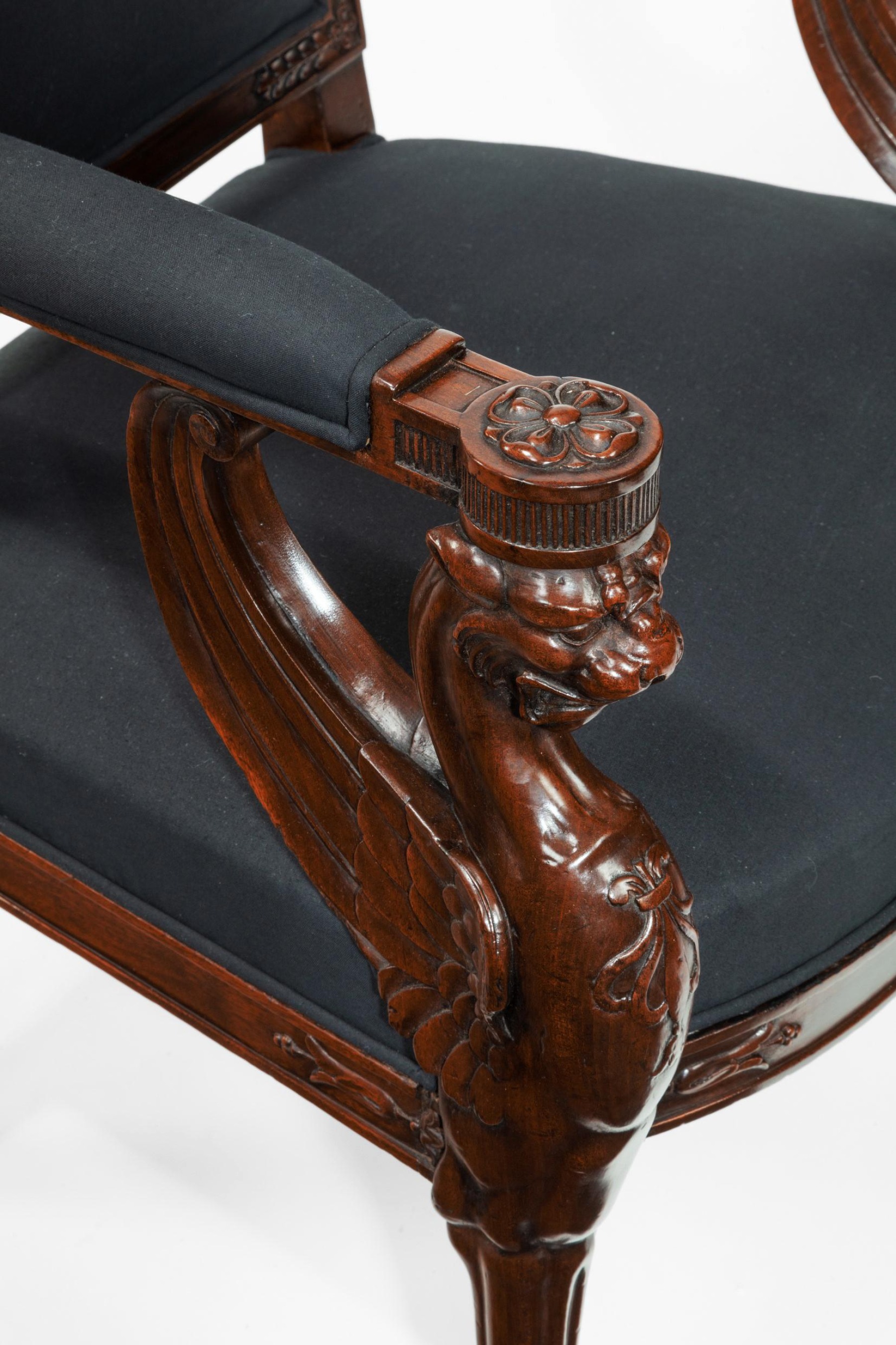 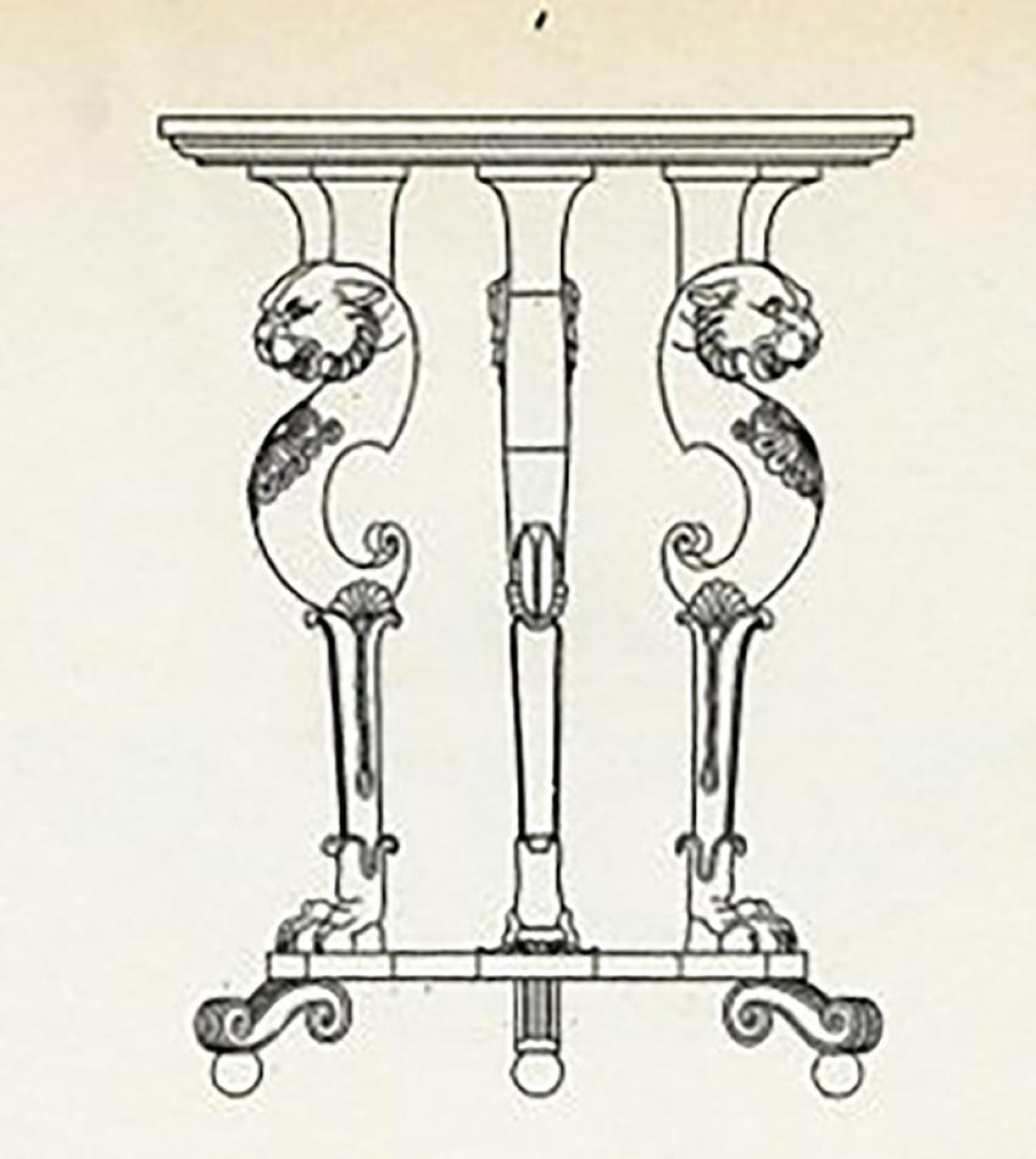 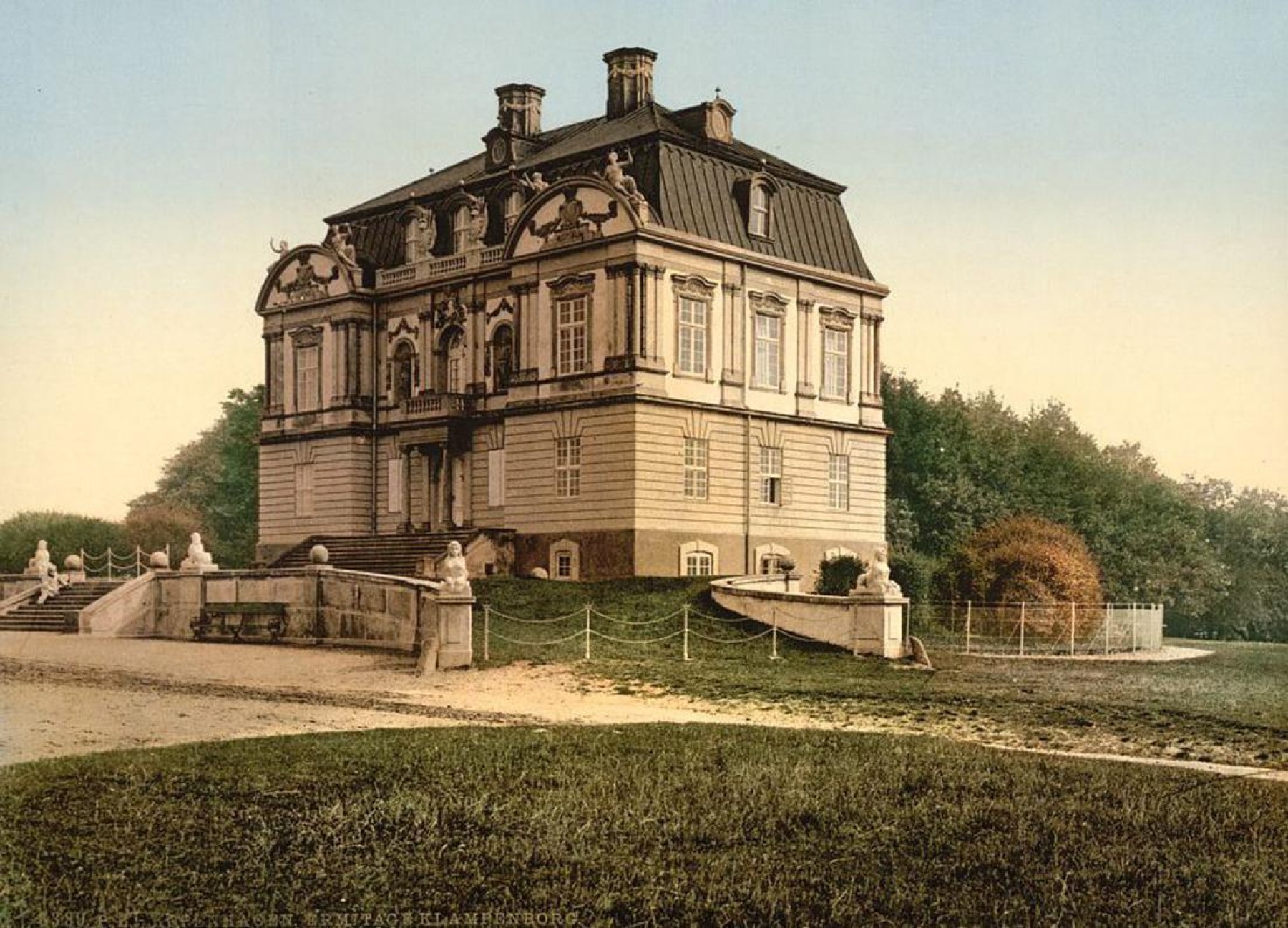 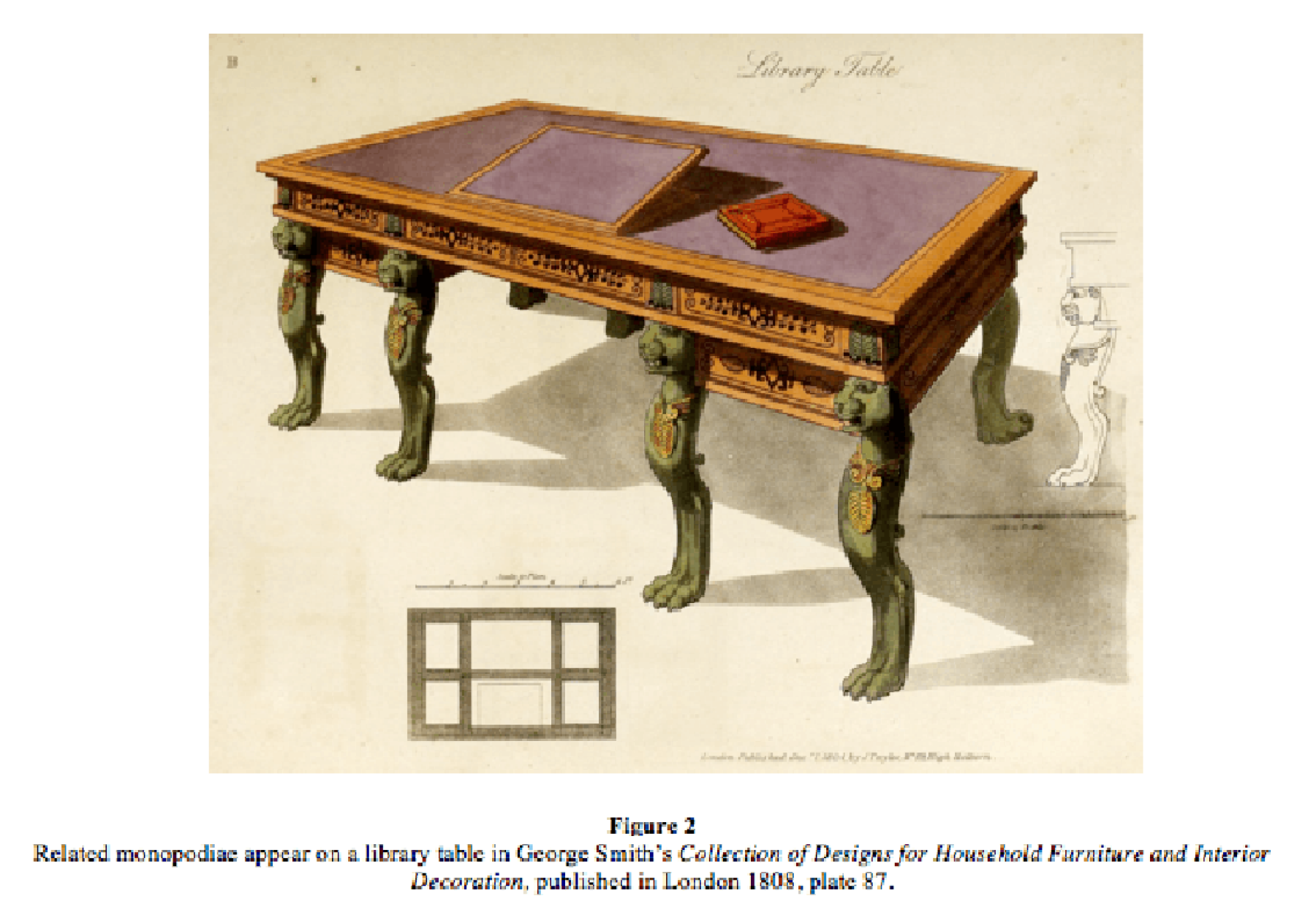 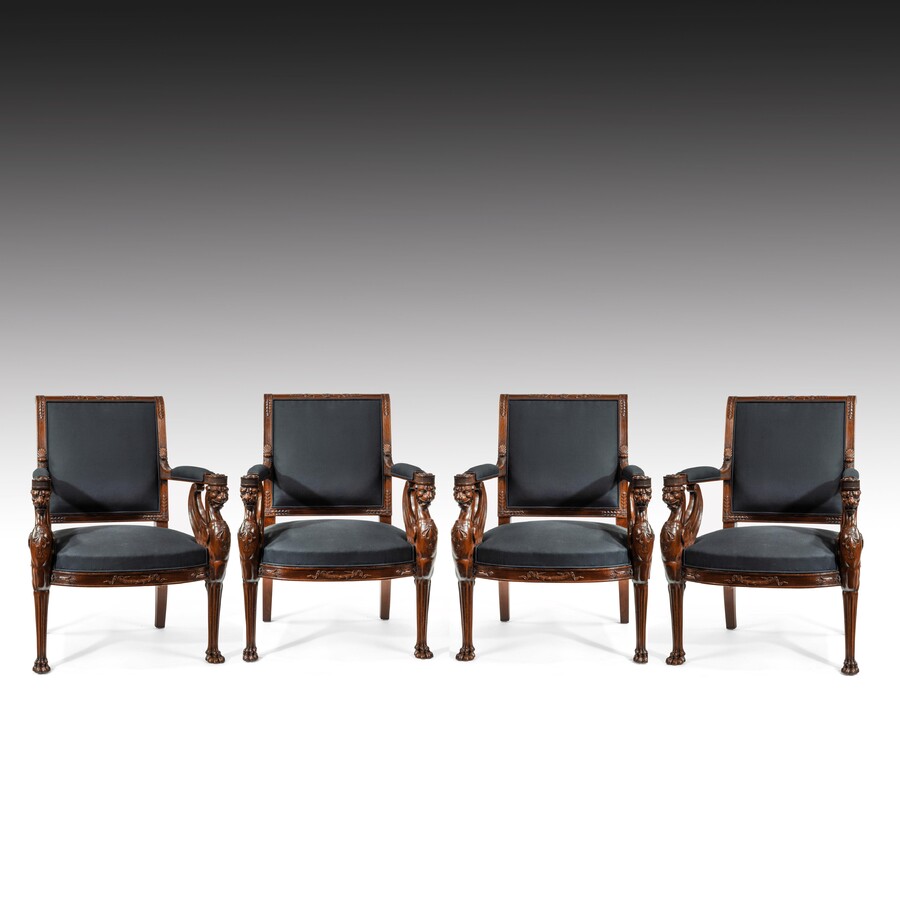 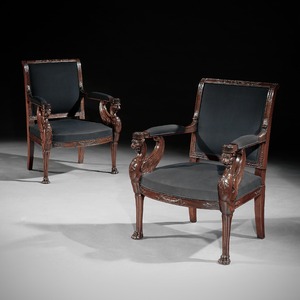 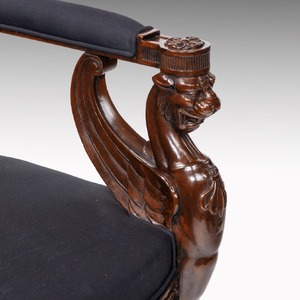 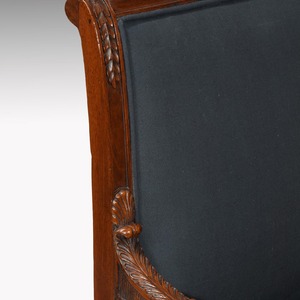 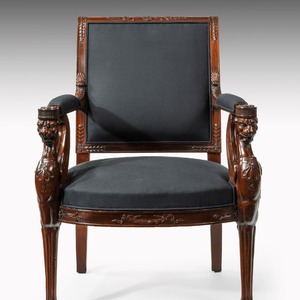 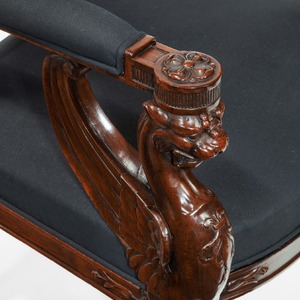 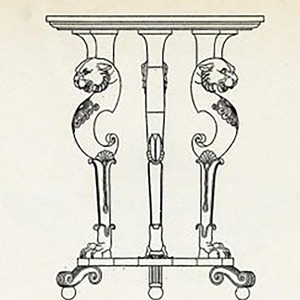 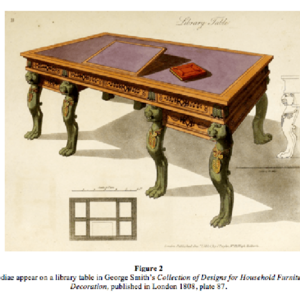 The gently raked, out-scrolled rectangular backs, with mahogany cresting rail centred by a carved rosette flanked by laurel trails, enclosing an upholstered back with single piped edge, above a pair of delicately carved foliate arm-supports, with padded upholstery, terminating on carved rosettes. The crescent shaped sprung seats, central by a laurel garland and lipped edge,  upholstered conformingly in a black calico with stitched front edge.

Standing boldly and late neoclassical in design, emitting the flare of the French Empire period, this delightful and important set of four fauteuils / armchairs, rarely seen on the market, are presented in excellent condition, recently finely reupholstered using a traditional hand stitched method.

We have rarely seen a better quality and detailed carved lion monopodia which is one of the most desirable emblems in antique furniture. We currently have two pairs of these armchairs available.

Design: The Empire style of architecture and furniture, named after the French Emperor Napoleon I, was conceived by Charles Percier (1764-1838) and Pierre Francoise Leonard Fontaine (1762-1853), whom were leading French architects and official architects to the court of Napoleon, their main responsibility was the renovation of the various royal residences. Their Recueil de décorations intérieures (1812) was an essential handbook of the Empire style.

The excavations of Pompeii and Herculaneum in the mid-18th century, along with Napoleon’s expeditions to Syria and Egypt in 1798-1801,  in which a military mission was followed by an archaeological expedition, where were inspiration was drawn. The Egyptian motifs and findings, on Napoleons mission, where returned and incorporated into the designs of Percier and Fonaine.

The emblem of a winged lion was intended to idealise Napoleons leadership and the French state.

It was from France this classic design spread throughout much of Europe and the United States, with Percier and Fontaine known to have influenced leading designers of the English Regency period, with the likes of Henry Holland (architect to the Prince Regent), Charles Heathcote Tatham and they were also known as close friends to Thomas Hope. The Regency period of design was long termed ‘English Empire’ which indicates its debt to France.

Charles Heathcote Tatham published Etchings, Representing the Best Examples of Ancient Ornamental Architecture; Drawn from the Originals in Rome, and Other Parts of Italy During the Years 1794, 1795, and 1796, in which he illustrated an antique tripod table with similar monopodiae of leopard heads and paws, based on the original in the Vatican.

Thomas Hopes furniture is highly desired, due to its detail and execution of design. There are many similarities in detail to winged monopodia legs from this set of fauteuils and designs in Thomas Hopes book ‘Household Furniture and Interior Decoration’.

Similarities in design and features can be seen on the tripod table with monopodia legs, published in ‘Household Furniture and Interior Decoration Executed from Design, by Thomas Hope.’ Reprint of 1807 ed.,1970, plate 32.

Royal Provenance: These chairs are by repute to have been housed in the Hermitage at Klampenborg, Copenhagen.

The hunting lodge was built by architect Lauritz de Thurah in Baroque style from 1734 to 1736 for Christian VI of Denmark. Never intended for residence, the Hermitage Hunting Lodge was built as a setting for hosting royal banquets during hunts in Dyrehaven, which surrounds the building.

Please find an image attached of this fabulous building.